Apache Corp. completed its exit from Canada on Thursday, announcing it would sell its Apache Canada Ltd. subsidiary to Calgary-based Paramount Resources Ltd. in a deal that signifies a broader exodus of foreign companies from the country’s energy sector. 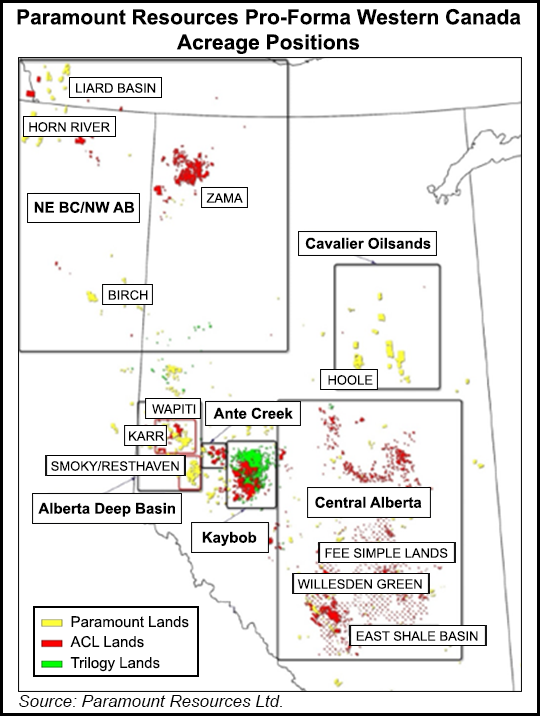 Combined with a deal to merge with Calgary-based Trilogy Energy Corp., the acquisition of the Apache subsidiary and its properties in Alberta and British Columbia would turn Paramount into a Montney, Duvernay and Deep Basin focused producer, with 2.7 million net acres across the resource plays.

Apache’s Canadian exit follows the sale of its Provost field legacy assets in Alberta to an undisclosed buyer in a deal expected to close in August along with the Paramount transaction. It also closed on the sale of its House Mountain assets in the same province and stakes in the Midale and Weyburn properties in southeastern Saskatchewan to Calgary-based Cardinal Energy Ltd.

The proceeds from all three transactions of $713 million (C$927 million) come as Apache focuses on streamlining its portfolio to evolve around a core of assets located in the United States, North Sea and Egypt. “This strategic decision will enhance the company’s resource allocation to its primary growth areas, particularly within the Permian Basin,” said Apache CEO John J. Christmann.

Apache joins others in shifting money out of Canada to the Lower 48. ConocoPhillips earlier this year sold Calgary-based Cenovus Energy Inc. its Western Canadian oilsands assets for $13.3 billion. Marathon Oil Corp. also sold its stake earlier this year in the Athabasca Oil Sands Project to a unit of Royal Dutch Shell plc and Canadian Natural Resources Ltd. for $2.5 billion, in turn buying 70,000 net acres in the Permian Basin.

While Apache has exposure to numerous plays in the Permian, the global independent has had a strong focus on its Alpine High prospect in the Delaware sub-basin since last year when it announced initial findings. Its West Texas operations ramped-up in the first quarter when it began flowing natural gas from Alpine High.

Production from the company’s Canadian operations averaged 300 MMcfe/d during the second quarter, two-thirds of which was natural gas. After it completes the exit, Apache said it would realize a significant reduction in asset retirement obligations and annual overhead costs. Those savings, along with proceeds from the sales, are expected to be pumped back into the company’s core areas. Apache budgeted $125 million of capital expenditures for Canada this year and next. It expects to update guidance after the three transactions are completed.

Paramount said it plans to fund the acquisition with cash on hand. It would also merge with Trilogy in an all-stock deal, exchanging one share for every 3.75 Trilogy shares. The merger is expected to be completed in September.