Apache Corp. significantly increased its developments in West Texas during the first quarter, with natural gas flowing last Wednesday at the Alpine High prospect and the midstream buildout ramping up two months ahead of schedule, CEO John Christmann said Thursday. 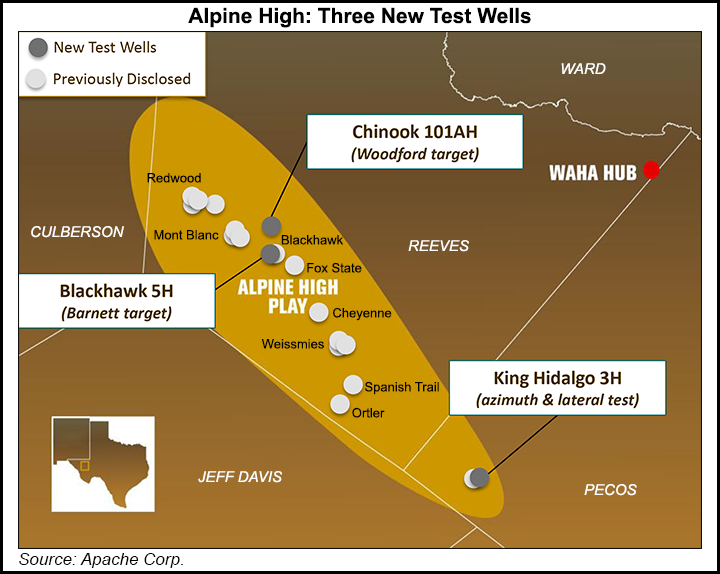 The global independent has a basket of prospects from which to choose, but the Alpine High in the Permian Basin’s Delaware sub-basin has drawn considerable interest since management gushed about initial findings last September. Within two months, Alpine High had become the No. 1 worldwide prospect. The direction was obvious during the conference call to discuss first quarter performance, as Christmann and his management team spent most of the hour squarely focused on the intriguing discovery.

“Initial gas sales began this week at a rate of around 20 MMcf/d,” he said. This volume should ramp up to more than 50 MMcf/d of gas production by the end of June. We’re also making good progress on drilling operations at Alpine High as we continue to climb the learning curve.”

Apache broke ground on the Alpine High infrastructure last November, and since that time it has installed about 14 miles of 30-inch diameter trunkline for gas delivery and 11 miles of gathering systems. Five centralized processing facilities are in various stages of completion, with one water recycling facility and 10 central tank batteries also being phased in.

A play the size of Alpine High “takes time to properly delineate and optimize, but our progress since the initial announcement eight months ago has been exceptional,” the CEO said. “To date, we’ve confirmed a highly economic wet gas play with a minimum of 3,000 locations…As we complete our delineation, we believe the wet gas location count will rise significantly. And as we test shallower zones and geologic settings, we believe that oil locations will also be added.”

“While there are significant industry infrastructure around the Permian Basin, Alpine High requires extensive in-field processing capacity and transport to market access,” Riney said. “Looking ahead at our future infrastructure buildout plans, a high-pressure gas trunkline system, through our acreage, should be mostly complete by the end of 2018. We will have a 30-inch line that connects to three market pipelines to the north, and a 30-inch line that connects to one market pipeline to the south. To accommodate longer-term volume growth, completion of the third line, running from Alpine High to the Waha Hub, is anticipated during 2019. The size of this line has yet to be determined.”

Ultimately, Alpine High gas would have access to multiple markets, the CFO said. The remaining infrastructure, including gathering lines, separation, treating, compression and processing facilities are to be built out over time as the pace of upstream development dictates. In the longer term, Apache plans to explore whether to install cryogenic gas processing to extract more natural gas liquids (NGL).

“In terms of liquids infrastructure, oil and NGLs are currently being trucked, which will continue for the near-term,” Riney said. “We anticipate the completion of an NGL pipeline, the size of which has yet to be determined, during 2019. We are evaluating options for the NGL line to extend beyond the Waha Hub to access further market optionality. Finally, there are many options for oil pipeline access, and we are exploring those for future consideration.

“As we look further into the future, the need to continue owning the Alpine High infrastructure assets should become less important. We see the possibility of a partial or full monetization and are planning accordingly,” Riney said, hinting that Apache could partner/sell some of the infrastructure.

“On the gas marketing side, we are advancing discussions on many fronts and have begun implementing a contracting strategy” which could include liquefied natural gas (LNG) exports, Riney said. “At this point, we have contractual assurance for the sale of most of our Alpine High gas for 2017 and have begun to contract for 2018.”

Beyond next year, Apache is developing a portfolio of market solutions for the Alpine High gas. “This will include targeting end users across a wide variety of industrial users, such as petrochemical complexes, utilities and LNG exporters. It will also include access to gas markets that can deliver higher netbacks. Specifically, this will require the ability to move gas away from the Waha Hub to places such as the Texas Gulf Coast and Mexico.”

Apache today is receiving a Waha base price for its gas, Riney said. Since the discovery last year, he noted that more than 10 pipeline projects have been proposed to expand Permian gas takeaway capacity.

“We expect at least two of these pipelines will be constructed with estimated in-service dates of mid-2019 to early 2020. While there has been some recent volatility in widening in the Waha base’s differentials, additional transportation capacity to the Texas Gulf Coast should help alleviate the situation.”

Apache’s team on the ground has well tests in progress, with new fracture (frack) designs and various proppant loadings.

“When we announced Alpine High, we released data on nine test wells,” Christmann said. “The results of these wells, coupled with the geologic and reservoir evaluation work completed at that time, confirmed a world-class unconventional resource with an estimated 75 Tcf of gas and 3 billion bbl of oil in place in the Woodford and Barnett formations alone. Resource estimates were confined to these two formations, because they had been the focus of the work to that point in time.

“The performance of our first batch of test wells at Alpine High was on par with or better” than longer-lateral, optimized wells and analogous shale resource plays, including Oklahoma’s stacked reservoirs and the Marcellus Shale, based on independent third-party reviews of estimated ultimate recoveries (EUR) per well.

Since the initial tests, delineation has continued, proving “much of what we anticipated for Alpine High, but this is a multi-dimensional hydrocarbon system with five distinct formations extending across a 60-mile fairway,” he said. “The Woodford, Barnett and Pennsylvanian formations are a true unconventional shale sequence, characterized by excellent reservoir quality, minimal to no in-situ water, strong EURs,” as well as low finding and development/operating costs. “There are at least eight potential landing zones within the Woodford, Barnett, Pennsylvanian, four of which we have confirmed to-date.”

Apache also has confirmed that the “entire source rock sequence is overpressured and contains all three hydrocarbon phases: oil, wet gas and dry gas.” Transition from tests to development has begun as infrastructure is completed.

Beginning late in the fourth quarter, Apache increased its Midland rig count to six from two, said operations chief Tim Sullivan. To date, more than 40 wells at Alpine High have been drilled by Apache, with four wells producing and 22 shut-in or curtailed that are awaiting infrastructure.

Three results from new Alpine High test wells were issued Thursday. The Chinook 101AH was drilled in the Woodford, Blackhawk 5H was drilled into the Barnett and a third well, King Hidalgo 3H, is in the southern portion of Alpine High, was an offset to Apache’s initial 9H well. The Chinook produced at a peak 24-hour initial production (IP) rate of 8.5 MMcf/d of rich 1,300 Btu gas and 620 b/d of oil.

“At a depth of 10,100 feet, the Chinook is our shallowest Woodford test to-date,” said Sullivan. “This is an excellent result, particularly when considering that it is an unoptimized test well with a 4,500 foot lateral and a smaller standardized frack. The Blackhawk 5H was completed at a depth of 9,760 feet and is our shallowest Barnett well disclosed to-date. This well produced at a peak 24-hour rate of 742 b/d of oil and 5.3 MMcf/d of rich 1,300 Btu gas. Like the Chinook, this was an unoptimized test well.”

The King Hidalgo 3H, an azimuth test well offset to the previously disclosed King Hidalgo 9H well, was drilled to a depth of 13,000 feet and recorded a 24-hour IP peak rate of 7 MMcf/d of 1,200 Btu gas and 72 b/d of oil. “The much stronger performance of the 3H proves that azimuth is critical in optimizing flow rates,” Sullivan said.

“The cost story at Alpine High is also very positive. We recently drilled a pacesetter well with a 4,600-foot lateral in just 13 days, from spud to total depth, at a cost of approximately $2 million. Regardless of the ultimate completion size and technique, all-in costs for this type of a well should fall comfortably in our targeted range of $4 million to $6 million. The result we see in our test wells at Alpine High continue to give us confidence that this will be one of the lowest cost, wet gas plays in North America.”

There is “cost escalation” in the Permian, a fact of life for other operators in the U.S. onshore as oilfield services become more valuable in the ramp-up.

“We continue to see pricing pressure for certain services and supplies, which we planned for in our 2017 capital budget,” Sullivan said. “Cost escalation is most apparent for pressure pumping, premium drilling rigs and sand in the Permian Basin. Anticipating this, we implemented a number of strategies to keep our cost structure low and minimize the impact of inflationary pricing. This includes leveraging our size as one of the most active drillers to achieve volume discounts, and we’ve also unbundled services.”

Apache is working with a “wider assortment of vendors” that provide a more continuous, steady program than other operators with smaller footprints.” As well, it has signed agreements for pressure pumping services and sand that index prices to West Texas Intermediate.

On the sand side, its self-sourcing product by buying almost all Permian native sand, mined close to the operations, Sullivan said. “Our tests indicates that we are achieving effective results with this product, and it significantly reduces our transportation costs. Vendor competition is good for Apache and healthy for the industry. We found that we can achieve good results safely and economically, sourcing more work to new and different providers.”

Net earnings reversed from a year ago, with 1Q2017 profits of $213 million (56 cents/share) from losses of $372 million (minus 98 cents). Net operating cash increased to $455 million from $239 million. Total capital spending worldwide, including in the North Sea and Egypt, was $500 million, lower than forecast and 68% directed to the Permian. This year’s capital expenditures are tracking in line with guidance of $3.1 billion.