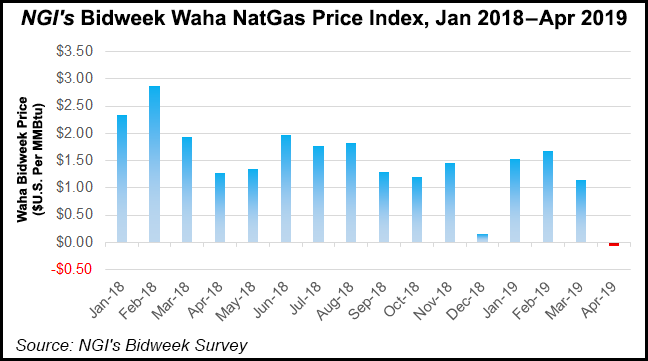 “At such time, Apache will be selling the vast majority of its Permian gas at a variety of Gulf Coast price points,” the CEO said. “Second, to address the pricing risk prior to these pipes coming into service, we entered into a series of basis swaps on a significant portion of our expected Permian Basin gas production through the middle of 2019. These swaps significantly mitigate the impact of current Waha pricing.”

Prices in West Texas have been dismal for weeks. Day-ahead prices strengthened somewhat on Monday at most locations, as Waha tacked on 8.5 cents to average 32.0 cents. However, maintenance on Northern Natural Gas this week may limit more than 150 MMcf/d of Permian volumes beginning Tuesday and continuing through Friday, according to Genscape Inc.

During the final three months of 2018, Alpine High gas volumes in the Delaware sub-basin were impacted by a field-wide shutdown for several days, back pressure on gas sales lines from Permian constraints and completions timing. Production averaged 58,000 boe/d net between October and December, and the play’s output exited the fourth quarter producing 70,000 boe/d net.

Apache expects “relatively wide and volatile natural gas price differentials in the Permian Basin until the Gulf Coast Express pipeline enters service. As a long-term returns-focused company, we know that production deferrals such as this will improve financial performance despite the impact on near-term volumes. This is the proper approach from both an environmental and economic perspective relative to other industry practices such as flaring or selling associated gas at a negative or unprofitable price.”

Apache plans to “closely monitor daily pricing and return our gas to sales when it is profitable to do so. We are carefully managing these actions so there is no adverse impact on long-term wellbore integrity or reservoir productivity and look forward to returning this production to market as soon as practical.”

Apache plans to address the impact of deferrals in its second quarter Alpine High production guidance when first quarter results are issued next week (May 1).

“Planned rig count and well completions are unchanged, and the company is reiterating its year-end 2019 Alpine High exit rate guidance of more than 100,000 boe/d,” Christmann noted.

Altus Midstream, which provides most of the natural gas liquids (NGL) processing services for Alpine High, plans to update its 2019 gathering and processing volumes “when Apache has more clarity on the potential duration and magnitude of future production deferrals. Apache is assisting Altus in managing its cost structure and the services it provides directly to Altus.” For now, there is no change to the guidance range for Altus this year.

Installation of the first two processing units at the Altus Diamond Cryogenic Processing site is proceeding “on budget and ahead of schedule.” The first unit is currently commissioning and is expected to enter service in May, and the second cryo unit is now expected to be fully operational in July.

“The exceptional progress that Altus has made is good news for Apache,” Christmann said. “Accelerated cryo start-up will enable us to bring any remaining deferred rich gas volumes back online and benefit from the significant revenue and margin uplift associated with deep-cut NGL recovery, offsetting weak Waha hub gas pricing.”