As further indication that the anti-hydraulic fracturing (fracking) fever is spreading in Colorado, a coalition of more than 40 organizations has called for Gov. John Hickenlooper to ask for a top state energy official’s resignation, and a U.S. congressman from the state has picked up the opposition fervor from his constituents and environmental groups. 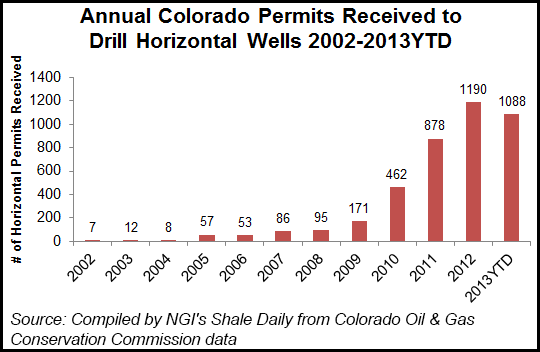 Various organizations, including anti-fracking groups from cities and counties around the state, accuse Matt Lepore, the head of the Colorado Oil and Gas Conservation Commission (OGCC), of indiscriminately approving thousands of wells for fracking and of allegedly trying to write off opposition groups as being “affluent and misinformed.” He made the comments in a speech at the Northern Colorado Energy Summit in Loveland, CO.

At the forum in July, Lepore apparently characterized anti-fracking activists as being affluent enough that they weren’t worried about how to pay for utility costs. Three days later, he apologized for his comments and said his remarks were “an over-generalization and improperly so,” according to reports.

Forty-one conservation groups wrote to Hickenlooper following the speech and said the OGCC has had a “sordid” track record in recent years when it comes to unconventional drilling using fracking. Lepore “mischaracterized” average citizens in the state and should be forced to resign. “This unfortunate attempt to discredit the tens of thousands of hard-working Coloradans who want to protect their families, health and property from the negative impacts of fracking was disgraceful,” the letter stated.

“Matt has apologized for his inappropriate comments,” said Brown. “He continues to have our support. We are confident our team will continue taking the steps necessary to ensure energy development is conducted safely and with respect for all Coloradans.”

U.S. Rep. Jared Polis, a Colorado Democrat also is stirring the pot after he publicly opposed a plan by Sundance Energy Inc. to use fracking to drill property adjacent to his second home in an unincorporated stretch of Weld County north of Denver.

OGCC reported that it had completed an inspection, based on the complaint, of the Sundance drilling site and found no violations by the operator. Polis withdrew his court complaint last Friday in Colorado’s 2nd District State Court in Denver, but he continues to criticize the plan. 2nd District Judge Kenneth Laff was not required to take any action once the congressman withdrew his complaint.

While getting push-back from Weld County officials, Polis has questioned the county officials’ alleged lack of control over drilling permits, asserting that unlike nearby Boulder County, where there was a moratorium on new oil/gas permitting, Weld has tended to be cozy with the industry. Polis has been undeterred by the OGCC inspection report and review by a unit of the Independent Petroleum Association of America, which is monitoring the congressman’s complaints for their potential political ramifications concerning unconventional drilling.

Polis called himself “a poster boy for reining in out-of-control fracking” in media reports and said the recent flap over the drilling near his property has given him “more of a soapbox,” and he has made it clear he intends to use it.