Antero Resources Corp. has filed at FERC to intervene in Tennessee Gas Pipeline Co. LLC’s request for a rehearing of the Commission’s order authorizing the construction and operation of the Broad Run Expansion Project, arguing in support of the lower fuel rates TGP has proposed. 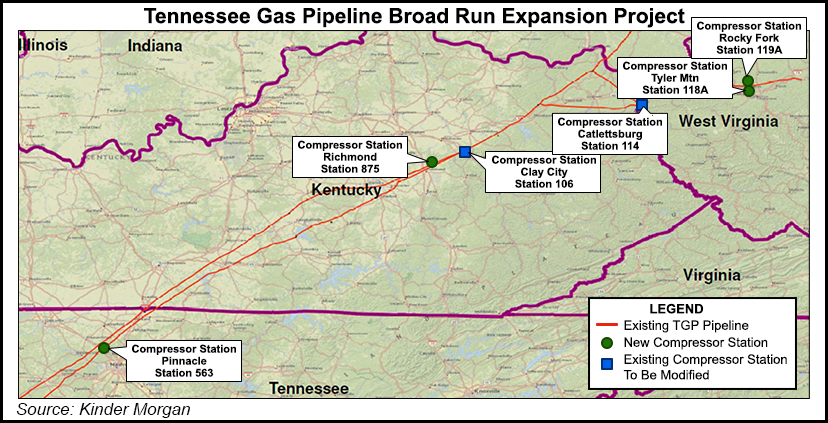 The Federal Energy Regulatory Commission issued the Broad Run project a certificate in September. But the Commission rejected TGP’s proposal to charge current system fuel rates instead of those that were in effect at the time it filed an application for the project in January 2015. Fuel rates are typically required as a percentage of shippers’ volumes to fuel compressor stations and make up for lost and unaccounted for gas. Earlier this month, TGP requested a rehearing on its proposal, saying FERC failed to provide a “reasonable basis and rational explanation” for rejecting current fuel rates.

Antero is the sole shipper on the Broad Run Expansion, which would provide the producer with 200,000 Dth/d of transportation from TGP’s Broad Run lateral in West Virginia to delivery points along the Gulf Coast. TGP has increasingly become a bifurcated system with the backhaul/reversal projects of recent years to send gas from the Appalachian Basin to the north and the south instead of only from the Gulf Coast to the North. Antero noted in its motion to intervene that flows from Appalachia to the north and south have altered the use of compression on the system in a way that has benefited all shippers and lowered fuel rates.

At the time TGP filed its application for the project in 2015, the fuel rate in question was 2.47%, but declines in fuel usage have lowered it to 1.58%, Antero said.

“Given that Tennessee’s fuel rate will remain under the fuel rate at the time the project was proposed and the other benefits that Tennessee’s customers have enjoyed as a result of new supplies on the system, the Commission should grant rehearing and permit Tennessee to charge the existing fuel rate,” Antero said in its filing.