Investors poured into onshore operator Antero Resources Inc. in its debut last week on the New York Stock Exchange, ending the week above $53.00/share, nearly $10 higher than the opening bid of $44.00 on Thursday. The “AR” stock is the second highest U.S. offering this year. 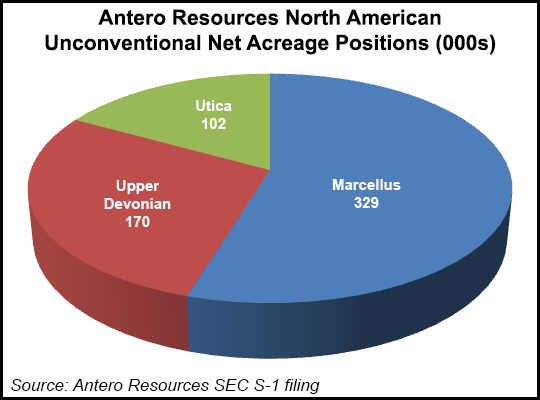 In two days of trading, close to 31 million shares were exchanged.

Antero had boasted a market capitalization of $11.5 billion when it was priced on Wednesday, expanding to $13.6 billion in the aftermarket, which allowed large-cap, mid-cap and hedge funds, as well as individual investors, to participate in the trading. Adding in about $1.4 billion in debt and subtracting about $550 million cash, Antero is estimated now to be worth $14.5 billion on the basis of enterprise value, which is about 11 times 2014 earnings.

Antero is expected to generate about $1.25 billion in earnings next year and be free cash flow positive in 2015. In the 12 trailing months ending June 30, Antero earned $408.2 million.

Antero only operates in Ohio, Pennsylvania and West Virginia and today has become a “must-own” name because of its dominance in the Marcellus and Utica shales, said Miller Tabak & Co. analyst Adam Michael. “This is one of the highest-quality E&P companies I’ve seen, as far as the acreage position, in a while,” said Westwood Holdings Group Inc. analyst Bill Costello. “They seem to be right in the sweet spot.”

Antero has become a pure-play operator in the Appalachia in only the past year and it now has about 329,000 net acres in the Marcellus, 102,000 in the Utica and around 170,000 in the Upper Devonian. It once held considerable assets in the Rockies, as well as the Woodford and Barnett shales, but no more.

With Warburg Pincus LLC’s backing, Antero launched in early 2003, helmed by CEO and Chairman Paul Rady and President and CFO Glen Warren Jr. The original company was sold to XTO Energy Inc. in April 2005. (XTO now is the U.S. E&P arm of ExxonMobil Corp.) Less than two years later, the second Antero was launched, again with Warburg’s backing and again with Rady and Warren at the helm. Rady, a former Barrett Resources executive, had helped to create and then run Pennaco Energy Inc. beginning in 1998 until it was sold three years later to a Marathon Oil Corp. predecessor. Warren had been CFO at Pennaco.

Funds to expand the drilling program in the Appalachian Basin since 2012 have come by selling off the Arkoma Basin assets, Piceance Basin properties and its Marcellus midstream operation. In addition to its drilling enterprise, Antero has been installing massive amounts of infrastructure including a 150-mile-long water sourcing and distribution pipeline to feed drilling sites across West Virginia and into Ohio (see NGI, Aug. 26).

Fifteen rigs are in operation in West Virginia, with Marcellus output averaging 555 MMcfe/d net. Of the 199 horizontals drilled in the Marcellus, 197 are online. A midstream business also has begun again with gathering facilities in West Virginia’s Doddridge and Ritchie counties. Contracts with MarkWest Energy Partners LP and affiliates today process most of Antero’s rich gas.

In the Utica, four rigs are operating and producing on average 85 MMcfe/d net. Eleven horizontal wells in Ohio are online.

Private equity will continue to exert a lot of control over Antero, with Warburg affiliated funds holding more than 38% of the voting interests in Antero Resources Investment LLC, which owns 87% of the producer. Yorktown Partners LLC and Trilantic Capital Partners also own stakes.