Antero Resources Corp. is guiding for continued improvements in natural gas liquids (NGL) pricing in 2017, and its acreage holdings and infrastructure position mean the company is ready to take advantage, management told analysts. 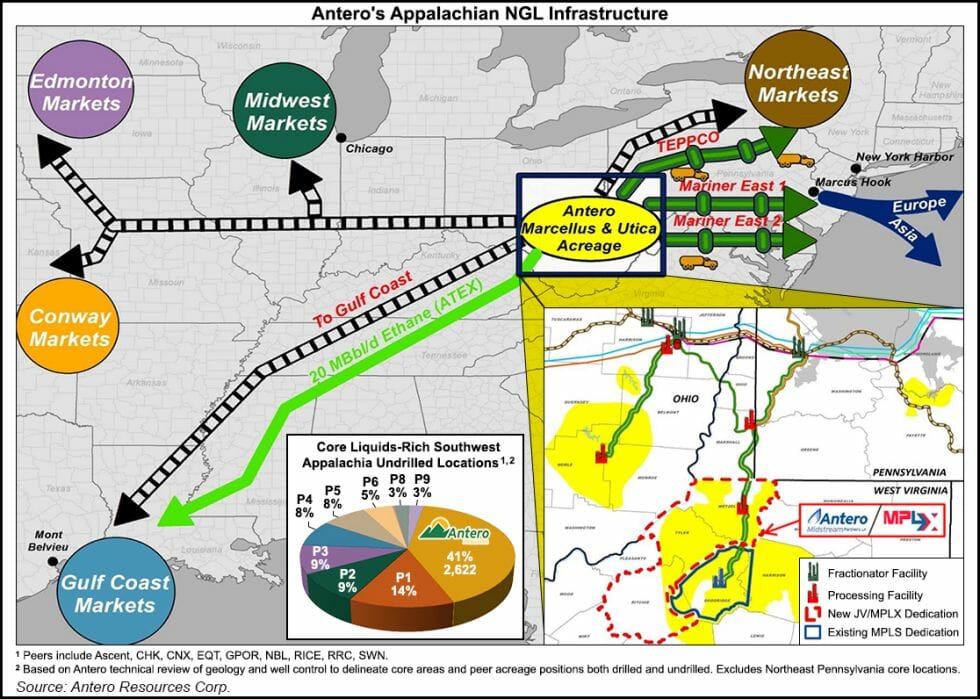 Discussing 4Q2016 results on a conference call Wednesday, the Denver-based, Appalachian-focused producer said it has raised its expectations for 2017 Mont Belvieu, TX, NGL pricing to 50-55% of West Texas Intermediate (WTI), up from 45-50%.

“Based on our detailed technical analysis, Antero hosts 41% of the undrilled core liquids-rich locations in Appalachia,” CFO Glen Warren said. “This provides us tremendous leverage and visibility when it comes to the NGL infrastructure buildout in the play…Our acreage position is well connected to significant NGL processing, fractionation and key long-haul transportation projects that move our product to market.”

The JV with MarkWest “provides us with tremendous clarity and certainty around the next 11 Antero-dedicated processing plants, or 2.2 Bcf/d of processing capacity in the Marcellus,” he said.

With Mariner East 2 in service, he said the E&P projects C3+ NGL price realizations of 55-60% of WTI in 2018. The projections are based on current strip pricing and do not assume “any incremental upside from an improvement in oil prices” affecting NGLs, he said.

On the natural gas side, Antero continues to pursue a strategy built around hedging and firm transportation commitments.

“We believe our firm transport and hedge book will continue to be competitive advantages for Antero, as uncertainty around both Northeast basis differentials and overall gas pricing is likely to continue,” Warren said. In 2017 and 2018, “we are 100% hedged on our expected gas production at very high levels, $3.63/Mcf for 2017 and $3.91/Mcf for 2018.”

With the Federal Energy Regulatory Commission approving the 3.25 Bcf/d Rover Pipeline last month, Antero now has more clarity on when its 800 MMcf/d capacity commitment to the project will become available.

CEO Paul Rady was asked about whether the E&P might be more active in the dry gas window of the Utica Shale in anticipation of Rover going into service later this year.

The expected date for service to Defiance, OH, “is July, and so we’re prepared to begin selling it as soon as it opens,” Rady said. “We might risk that a little bit, or at least we’re prepared if it opens later, but we expect it to be there in July.

Antero moved toward higher proppant loads in 2016 as it reduced well costs by 30% year/year in the fourth quarter based on operational improvements and reduced service costs, Rady said.

With the increase to 1,500 pounds/foot, Antero saw its estimated ultimate recovery (EUR) per 1,000 feet of lateral in the Marcellus increase 24% to 2.4 Bcfe, assuming ethane rejection, Rady said.

Management highlighted a recent 10-well Marcellus pad completed in the rich-gas area of West Virginia. The wells were drilled with average laterals of 10,500 and were completed with 1,750 pounds/foot. The combined 30-day production rate for the pad totaled 200 MMcfe/d, with 7,800 b/d of C3+ NGLs and 2,300 b/d of oil. The cost per well totaled $7.9 million for an all-in development cost of $0.36/Mcfe, the company said.

Antero posted a net loss for the fourth quarter of $485.7 million (minus $1.55/share) including $829 million of unrealized hedge losses, versus year-ago net income of $158 million (57 cents/share).