Appalachian pure-play Antero Resources Corp. has entered a drilling partnership worth up to $550 million with an affiliate of Quantum Energy Partners to fund a portion of its Marcellus and Utica shale development through 2024. 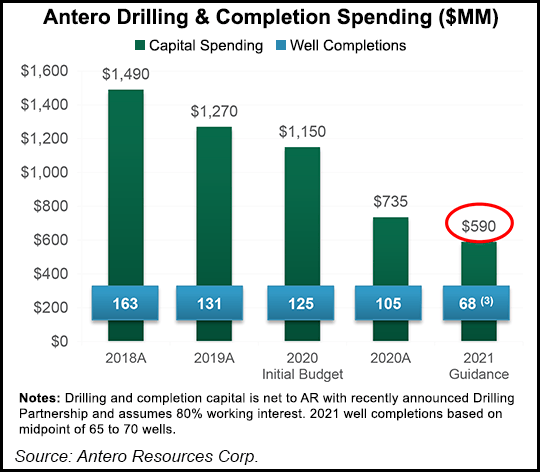 Under the deal, QL Capital Partners would fund 20% of Antero’s development capital spending in 2021 and 15-20% from 2022 to 2024 in exchange for a working interest in each well spud. QL has also agreed to pay a drilling carry each year if certain performance thresholds are met.

The drilling partnership would help fund drilling 60 wells over the four-year period. Preliminary plans focus primarily on liquids-rich development in the Marcellus Shale of West Virginia.

Antero also announced last week that it would spend $590 million this year on drilling and completion, a 20% decrease from last year’s levels.

“Our 2021 capital budget reflects our shift to a maintenance level capital plan and the benefit from our well cost savings initiatives that we launched in 2019,” said CEO Paul Rady. “ We are targeting total well costs of $635 per lateral foot for the second half of 2021, a 35% reduction from $970 in the initial 2019 budget. “