Planned production curtailments and delayed well completions continue to grow in the Appalachian Basin as more exploration and production (E&P) companies are continuing to announce less activity in the face of Covid-19 and the corresponding slide in commodity prices. 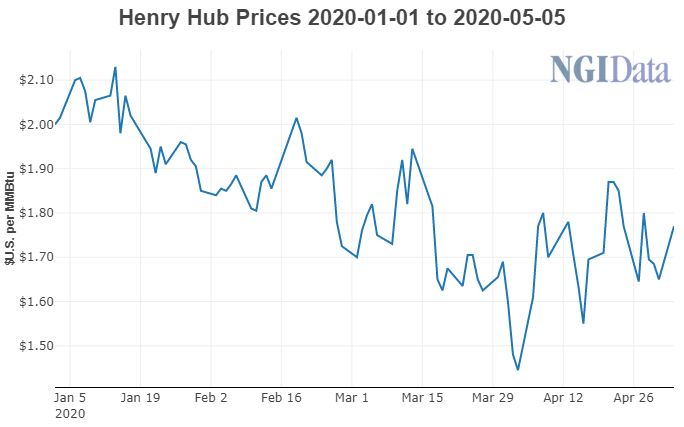 Appalachian heavyweight Antero Resources Corp., which continues to guide for a 9% year/year production increase to 3.5 Bcfe/d, said last week it would slash spending from $1.15 billion to $750 million this year. While the spending cut is partly driven by the lower well costs that have been achieved under an initiative launched last year, the near-term pricing environment is a factor.

The company plans to defer 20 well completions until next year given the decline in liquids prices that has occurred along with the oil rout. Antero noted, however, that it does not expect significant wet or dry gas production curtailments despite current market conditions. The company is primarily focused on wet gas production in West Virginia.

“To date, Antero has not shut-in or curtailed any production from its assets,” management said. “Although there is uncertainty around how long government stay-at-home mandates will remain in place and hence reduce oil and refined products demand, Antero believes that there will be minimal impact to its 2020 production guidance due to curtailments from condensate production.” The company also added that it “does not expect material curtailments to residue gas or dry gas production” as a result of the pandemic.

For 2021, Antero anticipates a maintenance capital program that would find it spending $600 million to hold production flat at 3.5 Bcfe/d.

Cabot Oil & Gas Corp., CNX Resources Corp. and Southwestern Energy Co. are among the Appalachian operators that have so far announced production curtailments given the slide in commodity prices.

National Fuel Gas Co. (NFG) joined the fray last week noting in its fiscal second quarter earnings report that it was forced to curtail 2.7 Bcf of production during the period from lower spot pricing at sales points in Pennsylvania, where it operates. The earnings release came just ahead an announcement late Monday that NFG would acquire Royal Dutch Shell plc’s remaining upstream and midstream assets in Pennsylvania for $541 million.

Seneca’s production guidance was also cut for the year to reflect the impacts of recent curtailments. The company is now guiding for 230-240 Bcfe of full-year production, compared to the previous range of 235-245 Bcfe. Seneca produced 59.8 Bcfe during its fiscal second quarter, up 23% from the year-ago period.

Seneca operates in western and north-central Pennsylvania, making Shell’s assets an ideal fit. Shell subsidiary SWEPI LP is casting off the natural gas-heavy properties in those areas of the state to Seneca and affiliates National Fuel Gas Midstream Co. LLC and NFG Midstream Covington LLC. Not included in the sale is the supermajor’s Pennsylvania petrochemicals complex, a multi-billion dollar ethane cracker now under construction.

Shell has been whittling down its portfolio worldwide, with a big focus on building liquidity during the Covid-19 pandemic. In North America, the focus also has been on deepwater projects and liquids-heavy plays, including the Permian Basin.

“National Fuel’s acquisition of these high quality assets in one of the most prolific areas in Appalachia will provide the company with a unique and highly strategic opportunity to further its integrated development approach in the region,” said CEO David P. Bauer.

“With significant economies of scale provided by Shell’s large Tioga County acreage footprint, which is contiguous to our existing development areas, along with significant, integrated gathering facilities, and valuable pipeline capacity, Shell’s assets are a perfect fit for the company’s diversified business model, and provide meaningful synergies with our existing operations.”

The deal adds more than 200,000 net acres in Tioga County to NFG’s portfolio, with net proved developed reserves estimated at 710 Bcf. At closing, the assets alone are forecast to have flowing net production of 215-230 MMcf/d.

In addition, NFG would take over 142 miles of gathering pipelines and related compression, 100-plus miles of water pipelines, and associated water handling infrastructure.

“Given their contiguous nature, the company expects to fully integrate the assets into its existing operations in Tioga County,” NFG management said. Operating cost synergies are expected in the exploration and production segment with cash operating expenses forecast to decline by 5-8 cents/Mcfe.

The deal, one piece of nearly $5 billion in asset sales planned by Shell, is scheduled to be completed by the end of July. NFG has an option to pay all cash or partially in cash and with a trade of up to $150 million of common stock at an adjusted price of $38.97/share over the next two years. The transaction is not contingent on financing conditions, NFG noted.

NFG reported a consolidated net loss of $106.1 million ($1.23/share) for the fiscal second quarter, compared to net income of $90.6 million ($1.04) in the year-ago period. The quarterly loss included a $129.3 million after-tax impairment of the company’s oil and gas properties due to low commodity prices.