Appalachian natural gas heavyweight Antero Resources Corp. said Monday it has closed an overriding royalty interest (ORRI) transaction with Sixth Street Partners LLC that will result in proceeds of up to $402 million. 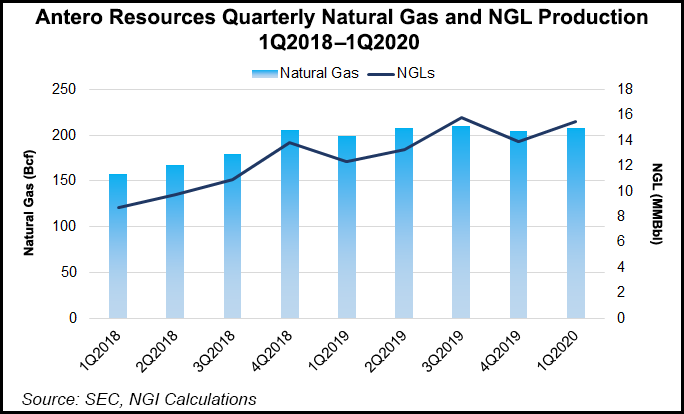 Proceeds are to be used to pay down the revolving credit facility.

Sixth Street, a Houston-based global investment firm with more than $34 billion in assets under management, acquired a 1.25% ORRI in all of Antero’s existing producing wells and a 3.75% ORRI in existing acreage in wells completed over the next three years.

“The ORRI transaction addresses over half of our $650-900 million asset sale goal for 2020 and allows us to pay down debt, while importantly retaining the long-term upside of our core acreage position,” said Antero CEO Paul Rady. “Additional asset sales and projected free cash flow during 2020 will be used to further reduce debt.”

CFO Glen Warren said the transaction “increases our liquidity, reduces debt, and positions us to address our upcoming bond maturities.”

With a 13% internal rate of return and a 1.5 times cash-on-cash return to Sixth Street, “Antero will have an 85% reversionary interest in the ORRI and Sixth Street’s interest will drop to 15%,” management said.

The transaction does not burden Antero well completions beyond March 31, 2023, the company said. On a weighted average basis, the applicable overrides equate to about a 1-1.5% ORRI across Antero’s entire asset base on a perpetual basis, management said.

Citing Antero’s “extensive core acreage position in one of the lowest cost shale basins in the U.S.,” Sixth Street partner Matt Dillard said, “Our investment further strengthens Antero’s balance sheet and provides a clear path for the company to develop its attractive acreage position for many years to come.”

Antero, which is the fifth-largest U.S. gas producer and second-largest producer of natural gas liquids (NGL), in May lowered its 2020 capital budget to $750 million from $1.15 billion in response to the economic slowdown caused by Covid-19.

In a company presentation on Monday, Antero said about 98% of the natural gas production is hedged through 2021 at prices about 20% above strip pricing as of May 29. The company expects natural gas and NGL prices to strengthen over the coming quarters due to resilient global demand and material supply declines, assuming the current oil price strip.

The company also said it expects natural gas supply reductions to outpace the pandemic-related decrease in demand, bolstering prices, although price movements have at times seemed to indicate the opposite view by traders in recent days.

The combined rig counts in the gassy Marcellus, Haynesville and Utica formations have only declined by 22% since March 6, Antero highlighted, versus a 70% decline in the main Lower 48 oil-heavy plays.

Antero’s combined production from the Marcellus and Utica Shales was 3.37 Bcf/d in the first quarter, comprising 68% natural gas by volume.