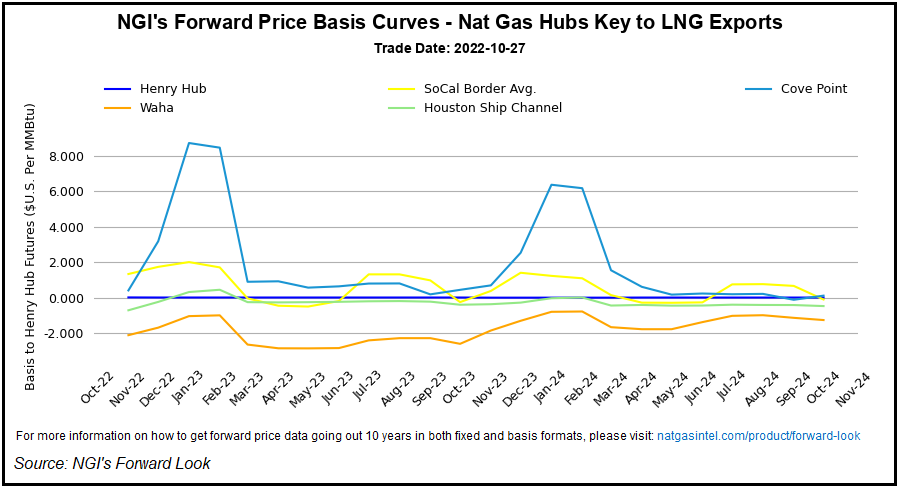 On a conference call to discuss third quarter earnings, Antero’s Justin Fowler, senior vice president of gas marketing and transportation, touted the company’s “unique ability to avoid the pitfalls of regional capacity constraints and wide basis discounts, which we saw once again during the third quarter.”

He said Antero holds 2.3 Bcf/d of firm transportation capacity – equal to about 75% of its total production – to the U.S. Gulf Coast liquefied natural gas fairway, and to the Cove Point LNG terminal in Maryland.

Looking ahead, Antero expects negative basis differentials to widen in Appalachia, the Permian Basin and the Haynesville Shale due to pipeline capacity constraints, Fowler said.

“In the Permian, we do not expect basis improvement or meaningful supply growth reaching markets until the third quarter of 2023, when incremental pipeline capacity is expected to be completed,” Fowler added. He noted the Waha cash price’s recent plunge into negative territory as evidence of the trend.

“The Haynesville is in a similar constrained position over the next nine to 12 months as it awaits incremental pipeline capacity,” Fowler continued. “Having the firm transport capacity is important in avoiding the price volatility from regional basis blowouts.”

Conversely, Fowler said basis differentials at the primary hubs into which Antero sells its gas “have all seen improvement over the last few years.”

He explained that, “As additional LNG trains and terminals are completed, we expect that the pricing hubs where we sell the majority of our gas will see larger and larger positive basis premiums” to the New York Mercantile Exchange (Nymex) Henry Hub price.

Fowler continued, “With the expected increase in LNG exports…we believe these premium hubs will see price increase more dramatically than Nymex, as they link directly to international prices.”

Looking ahead, Fowler said, “we continue to believe that the labor and equipment tightness along with infrastructure constraints will make natural gas growth challenging. Historically low coal storage, leading to the inability for switching, and a wide global arbitrage spread that suggests LNG exports will remain at above maximum utilization this winter, supports our positive outlook for natural gas prices going forward.”

As for its upstream portfolio, “Antero has the greatest amount of low-cost inventory in the basin, with more than 800 future locations, which will continue to drive our consistent performance well into the future,” CEO Paul Rady told analysts.

Antero is maintaining its full-year 2022 average production forecast of 3.2-3.3 Bcfe, “with expectations to now be at the low end of the range,” management said.

The company has upwardly revised its full-year expected 2022 drilling and completion capital spending to a range of $775-800 million from $725-750 million previously.

The adjustment reflects “completion activity being pulled into the fourth quarter and incremental inflationary pressure related in part to higher services, diesel and steel costs,” management said. Antero now expects to complete 72 wells in 2022, versus previous guidance of 60-65 wells, which should lead to higher sequential production in the first quarter of 2023.

Land capital spending, meanwhile, is now forecast to be in a range of $125-150 million, compared to $100-110 million previously. This revision is due “to continued success in the organic leasing program that has allowed Antero to increase its premium drilling locations in its liquids-rich fairway,” the company said.

“During the first nine months of 2022, Antero’s organic leasing program has added approximately 60 drilling locations in the core of the Appalachia liquids area at an average cost of under $1 million per location, essentially offsetting Antero’s maintenance capital plan that assumes an average of 60 to 65 wells per year,” management said. Antero also acquired minerals in its Marcellus Shale area of development “to increase its net revenue interest in future drilling locations. The Company believes this organic leasing program is the most cost efficient approach to lengthening its core inventory position.”

Antero placed 22 Marcellus horizontal wells to sales during 3Q, with an average lateral length of 13,600 feet.

Antero reported a weighted average realized price after hedging of $6.06/Mcfe for its output during 3Q, up from $3.79/Mcfe in the year-ago period.

He cited that Antero managed to fetch a pre-hedge premium for its natural gas production of 49 cents/Mcf relative to Nymex Henry Hub pricing.

For its C3+ natural gas liquids (NGL) production, which consists mainly of propane, isobutane, normal butane and gasoline, Antero reported an average pre-hedge realized price of $50.61/bbl, versus $52.68/bbl a year ago.

Antero shipped 61% of its total C3+ net production on the Mariner East 2 pipeline for export and realized a 7 cent/gallon premium to Mont Belvieu pricing for these volumes, management said. The remaining 39% of production was sold at a 9 cents/gallon discount to Mont Belvieu at Hopedale, OH.

On the environmental front, Rady said Antero has made “tremendous progress” on its goal to achieve net zero Scope 1 and 2 greenhouse gas emissions by 2025. “Our ability to provide lower carbon energy to both our communities at home and abroad, directly improves the health, safety and livelihood for people living in energy poverty,” Rady said.

Antero reported a total hedging loss of $635 million for the quarter and did not enter into any new hedges during the period.