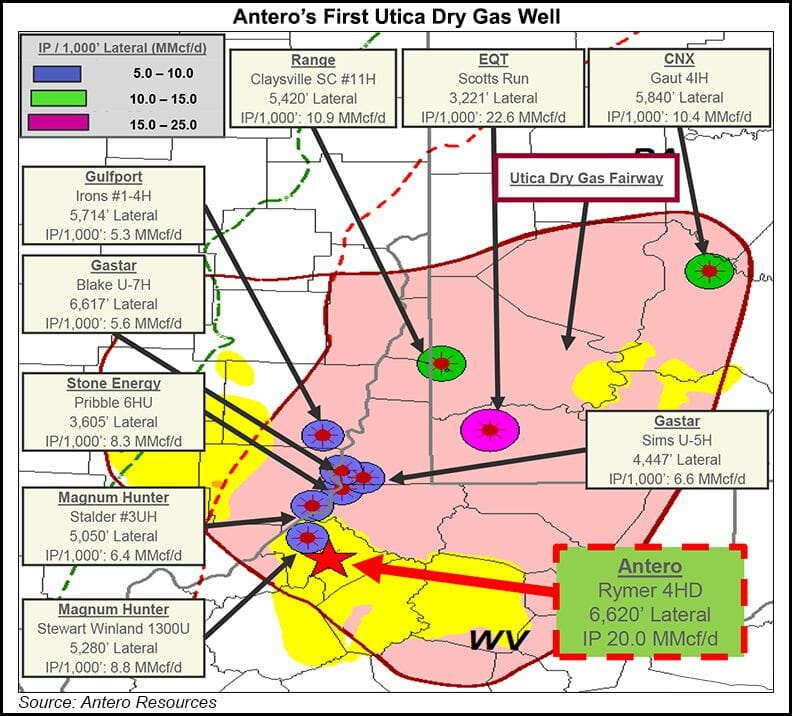 In its 4Q2015 operations update released Wednesday, the Denver-based exploration and production (E&P) company revealed the initial results from its Rymer 4HD Utica well in Tyler County, WV. After 20 days, the well produced at a choke-restricted rate of 20 MMcf/d, the company said.

CEO Paul Rady said the Rymer 4HD returned “encouraging initial production results that are consistent with other industry wells in the trend. This well is the most southerly Utica well drilled by industry in West Virginia to date, and begins to delineate our 188,000 net acres of Utica leasehold rights underlying our Marcellus position.”

The Stonewall Gathering System, expected to transport about 1.4 Bcf/d by summer, was put in service in late 2015 and Antero was able to move more of its product to better pricing outside the Appalachian Basin (see Shale Daily, Dec. 29, 2015).

The E&P said it sold its gas at an average price of $2.13/Mcf for the quarter before hedging, a negative 14 cent differential to the New York Mercantile Exchange (Nymex). The average realized price for 3Q2015 was 45 cents below Nymex, and the company attributed the quarter/quarter improvement to the Stonewall project, a 50-mile expansion of M3’s existing Appalachia Gathering System.

“Approximately 83% of Antero’s fourth quarter 2015 natural gas production was sold at favorable price indices, including TCO, Chicago, Gulf Coast and Nymex, including virtually all volumes sold during the month of December” when Stonewall first came online, compared to “68% in the third quarter,” the company said.

The company said it has increased its hedge position to 3.5 Tcfe through 2022 at an average price of $3.79/Mcfe.

Total average net production for the quarter averaged just under 1.5 Bcfe/d, up 18% from the year-ago period but down 1% sequentially. Average net liquids production totaled 54,757 b/d, up 80% year/year and a 5% increase over 3Q2015.