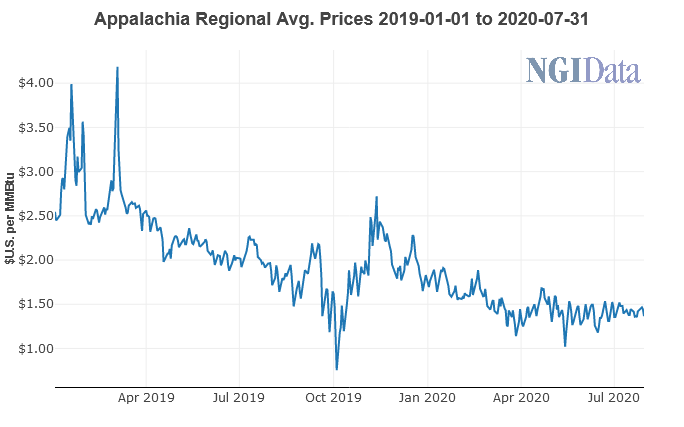 Appalachian pure-plays Antero Resources Corp. and CNX Resources Corp. said Thursday their activity would remain subdued through most of the year as they work to implement plans crafted  by Covid-19’s impacts on energy markets.

CNX, which announced both liquids and dry gas production shut-ins in April in response to low commodity prices, has yet to return those volumes to sales like some others have.

“If the current gas price contango continues through the summer, the company expects that these shut-in wells will be back online in early November,” CNX management said.

The curtailments cut year/year production in 2Q2020 to 114.5 Bcfe from 134.5 Bcfe. Still, management said the decision to manage production through the latest downturn will improve 2021 results. The company slashed the 2020 production forecast to 490-550 Bcfe in April and reiterated the target on Thursday, adding that little has changed in the broader seven-year strategy through 2026 in which average production is forecast to be 560 Bcfe annually.

Meanwhile, Antero reported a 9% year/year increase in 2Q2020 production to 3.5 Bcfe/d, 67% liquids. CFO Glen Warren said 69 of the company’s 105 planned wells for the year have been completed, meaning capital spending should be “substantially lower” in the second half of the year. The company also expects service cost deflation as it released three rigs and two completion crews in the second quarter to help lower expenses for the remainder of the year.

“We have made considerable progress toward our $750 million to $1 billion asset sale target, having closed $531 million of transactions to date,” CEO Paul Rady said. “The asset sale proceeds received to date have enabled Antero to reduce total debt by $365 million since the start of the bond repurchase program in the fourth quarter of 2019.”

Warren added that the repurchases have so far saved Antero $888 million in near-term maturities.

Continued drilling efficiencies, including a record 11,253 lateral feet drilled in a 24-hour period during the second quarter, led to average wells costs below $700/lateral foot. Those costs are expected to average $675/lateral foot in the second half of the year, or 6% below a target set in 2019.

Antero said it monetized some 2021 natural gas hedges in July for $29 million to align with next year’s projected volumes. CNX said it also monetized and canceled some hedges for about the same amount.

Both companies said average realized prices slipped during the second quarter. On a blended basis, Antero realized an average price of $2.81/Mcfe during the period, down 13% from the year-ago quarter.

Antero reported a second quarter net loss of $463 million (minus $1.73/share), compared with net income of $42 million (14 cents) in 2Q2020. The decline was primarily related to lower commodity prices, it said.

CNX reported an average realized price of $2.52/Mcfe in the second quarter, compared with $2.63 at the same time last year.

CNX reported a net loss of $146 million (minus 78 cents), compared with net income of $162.5 million (85 cents) in the year-ago period. The quarter’s results included an unrealized hedging loss of $206 million.

The company also announced earlier in July that it is acquiring CNX Midstream Partners LP by exchanging CNX common stock valued at $357 million for all of the midstream company’s outstanding common units.The transaction is expected to close by year’s end.