Antero Resources LLC, now preparing to become a publicly traded explorer, already oversees one of the biggest operations in the Appalachian Basin, and it wants to keep it that way by building a 150-mile-long water sourcing and distribution pipeline that would feed drilling sites across West Virginia and into Ohio. 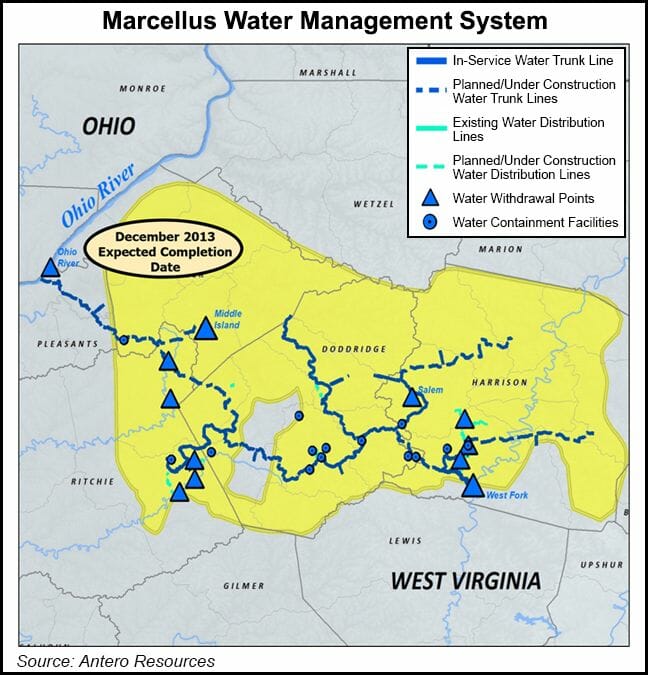 The water trunk line, set to be completed in December, begins at the Ohio River in Pleasants County, WV, and would carry water supplies northeast to drilling sites across the state. Water containment facilities and withdrawal points are planned in, among other places, Middle Island, Richie, Salem and West Fork.

Estimated costs for the West Virginia system are projected at $375 million, including $215 million in 2013 capital costs.

The system, which would provide a “reliable, year-round water supply, is expected to not only increase operational efficiency but reduce water truck traffic.

Antero isn’t only using in-house water supplies to increase its operations efficiencies, according to management. Multi-well pad drilling being implemented “saves up to $200,000 per well by reducing rig moves.” Shallow rigs also are being used to drill to the “kick-off point” of the resources, saving another $250,000 or more per well.

And the producer is going with the gal that brought it to the dance: it expects most of its rigs to be natural gas-powered by the end of this year, saving up to $50,000 per well in fuel costs and emissions reductions.

Net income in 2Q2013 was $131 million, including $181 million of unrealized hedging gains. Excluding one-time items, Antero earned $34 million in the period, versus $8 million in 2Q2012. Revenues climbed year/year to $387 million from $39 million. Cash flow from continuing operations jumped 195% from a year ago to $92 million.

For July, Antero estimated that net output averaged 461 MMcfe/d, which included 4,500 b/d of liquids. Current estimated net daily production is 580 MMcfe/d, with gross operated production at 660 MMcf/d. Antero said it had an additional estimated 160 MMcfe/d net associated with 14 completed and tested horizontal wells in the Marcellus and Utica shales “that are shut-in waiting on infrastructure and a number of producing wells that are constrained and waiting on additional pipeline and compression facilities.”

Current estimated net daily production is comprised of 533 MMcf/d of gas and 8,400 b/d of NGLs and condensate. Antero in the second period completed 32 net wells in the Marcellus and Utica and it has 54 net operated wells in various stages of completion.

In the Marcellus, Antero is operating 15 drilling rigs, all in northern West Virginia, including three intermediate rigs that are to drill the vertical section of some horizontal wells to the kick-off point at about 6,000 feet. Current output from the play is 620 MMcf/d gross, “virtually all of which is from 182 horizontal wells, resulting in 545 MMcfe/d of estimated net production,” including 505 MMcf/d of tailgate gas, 6,800 b/d of NGLs and 100 b/d of condensate. Fifty horizontal wells in the Marcellus either in the process of drilling, completing or waiting on completion and two dedicated frac crews currently working in West Virginia and several spot frac crews available as needed.

One rig is to be moved to the Utica by the end of September, where Antero now is using three rigs. A fifth rig is scheduled by the end of the year.

“Initial production from all but one of Antero’s 11 completed horizontal Utica wells has been delayed for several months pending the completion of third-party high pressure gathering infrastructure,” the operator noted.

The final 16-mile segment of the Seneca-to-Cadiz pipeline was placed into service earlier this month, which enables Antero to transport rich gas from the Utica to the MarkWest Energy Partners’ Cadiz facility, which was delayed two months on wet weather. Two Utica horizontals now have access to gas processing facilities, and the pipeline “provides Antero with interim access to 185 MMcf/d of combined cryogenic and refrigeration natural gas processing capacity…As an anchor producer, Antero initially has up to 82 MMcf/d of preferred interim processing capacity at Cadiz.”