In response to customer interest, TransCanada Corp.’s ANR Pipeline has proposed a project to connect its system with Utica/Marcellus shale gas, enabling it to access multiple markets downstream of the ANR system. 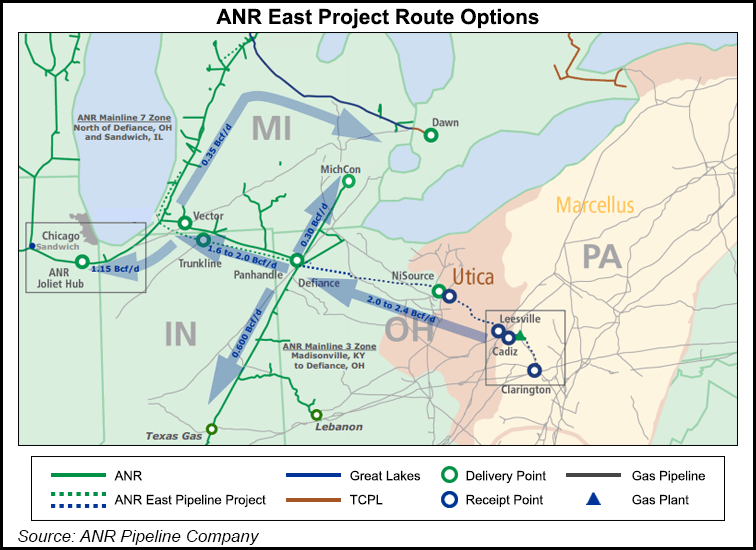 The pipeline is dipping its toe into the Appalachian Basin with the ANR East Project, a scalable, multi-part project that would allow Utica and Marcellus shale gas to access the Midwest, Gulf Coast and Dawn, ON, via multiple pipeline interconnections.

A nonbinding open season runs through July 28. The project would also allow for receipts of Utica/Marcellus gas at or near Defiance, OH, a hub of several existing and proposed third-party pipelines that offer capacity to various downstream markets.

Last March, John Hampton, ANR director of business development, told NGI the company was considering a pipeline connection directly with the Utica/Marcellus after customers had been requesting it (see Shale Daily, March 12). “I think it [this project] gets us right where need to be with our feedback we had from customers,” Hampton said Wednesday.

ANR is proposing a large-diameter 1,440 psig pipeline from Clarington, OH, through Cadiz and Leesville, OH, to an interconnection with ANR’s existing system at Defiance. Facility enhancements would expand existing ANR system capacity from Defiance to market locations in ANR’s ML7 and ML3 rate zones.

“The project is designed to provide additional export transportation capacity for shippers to move gas supplies from Southeast Ohio or Northwest Ohio (near Defiance), to markets in the U.S. Midwest and Gulf Coast,” the pipeline said in open season documents. “Based on customer interest, ANR can also provide transportation service to Dawn, ON, via seamless arrangements with its pipeline affiliates Great Lakes Gas Transmission [GLGT] and TransCanada Pipeline.”

The project would include multiple options:

ANR said it also would consider constructing facilities to take gas at locations other than Clarington, Cadiz or Leesville, as well as new or expanded connections with markets and pipelines crossing its existing system or that of the project.

The project would provide access to more than 35 electric and/or natural gas utilities, “significant” connections to local distribution company demand in Michigan, Wisconsin, Illinois, Indiana and Ohio. It also could reach “significant” gas-fueled power generation demand from 40 power plants across the ANR system, the pipeline said. Access to more than 900 Bcf of storage capacity would include 250 Bcf of on-system ANR storage, as well as that of third parties.

The targeted in-service for the project is during the third quarter of 2017. Service could be phased in for portions of the project before then depending upon regulatory approvals.

“The ANR footprint accesses significant demand growth potential as well as on-system storage market opportunities,” the pipeline said. “Through interconnections on the existing ANR and GLGT [Great Lakes Gas Transmission LP] systems, the ANR East project provides access to 27 Bcf/d of meter capacity in the Midwest and into Ontario.

“In addition to Midwest markets, ANR’s Southeast Mainline capacity provides access to 6.5 Bcf/d in Louisiana and significant growth opportunities in the Gulf Coast, and additional meter capacity is being developed for deliveries of supply for LNG [liquefied natural gas] exports in south Louisiana. ANR’s Southwest Mainline provides access to markets to west and south.”

The ANR East project is one of several that are targeting Marcellus/Utica production, the growth of which continues to exceed expectations (see Shale Daily, June 27).

Additionally, Rockies Express Pipeline LLC has a project that would create 1,200,000 Dth/d of east-to-west firm capacity within the pipeline’s Zone 3 with the intent of moving Appalachian gas to the Midwest with avenues to branch off toward the Gulf (see Daily GPI, June 23).