Residents and college students in a blue collar neighborhood just south of downtown Los Angeles and near the University of Southern California (USC) campus have targeted a well site in the Las Cienegas oilfield after operator Freeport-McMoRan began maintenance acidizing at the two-acre urban site. 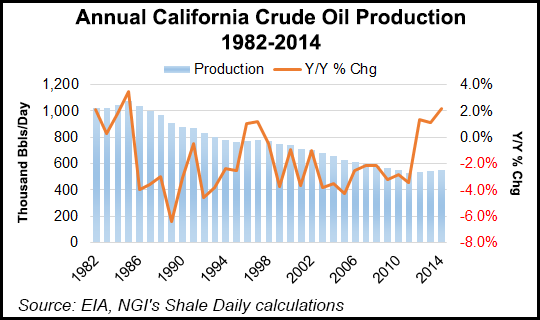 The latest pushback from residents is reminiscent of similar concerns for another site near USC owned and operated by Allenco Energy Co. Allenco shut down operations 18 months ago so it could improve its operations in the face of community and political pressure (see Daily GPI, Nov. 27, 2013).

Earlier this year, Freeport abandoned plans for new drilling at the Los Angeles site, which borders a main east-west boulevard, following an outcry by nearby residents.

In response to NGI‘s inquiry, Kinneberg said there were no hydraulic fracturing operations at the site, which has been in continual operation since 1965. “The site currently has 37 well slots in a below-grade concrete cellar,” he said. Daily production is about 350 b/d, supporting about 300 royalty owners affiliated with the facility, one of numerous urban sites Freeport-McMoRan operates throughout Southern California.

“[We] provided notice to the South Coast Air Quality Management District of our intention to conduct routine and conventional well maintenance work,” Kinneberg said. “The work ensures the well is maintained in optimum condition. The work being planned is similar to the type of maintenance work that is performed on water supply wells all over the world and throughout the Los Angeles region.”

Residents are calling for Los Angeles officials to scrutinize more closely the chemicals, noise and heavy truck traffic that they allege are part of the drilling operations.

Separately, the city council has considered a ban on fracking, drawing threats of a lawsuit from the Western States Petroleum Association. Late last year the city was pursuing a planning department alternative calling for land-use and planning regulations (see Shale Daily, Nov. 11, 2014).

At least one council member, however, told the Los Angeles Times last week that a proposed moratorium on drilling is still being pursued by city officials.

According to Energy Information Administration data, California crude oil production was up 2.2% year-over-year in 2014, the highest annual increase in the state since 1985.