Natural gas traders continued to sell off positions Wednesday in anticipation of critical data that may offer the first clues on how much U.S. demand has been lost in the wake of the coronavirus. The May Nymex gas futures contract hit a $1.679/MMBtu intraday high but ultimately settled at $1.587, down 5.3 cents day/day. June fell 4.4 cents to $1.712. 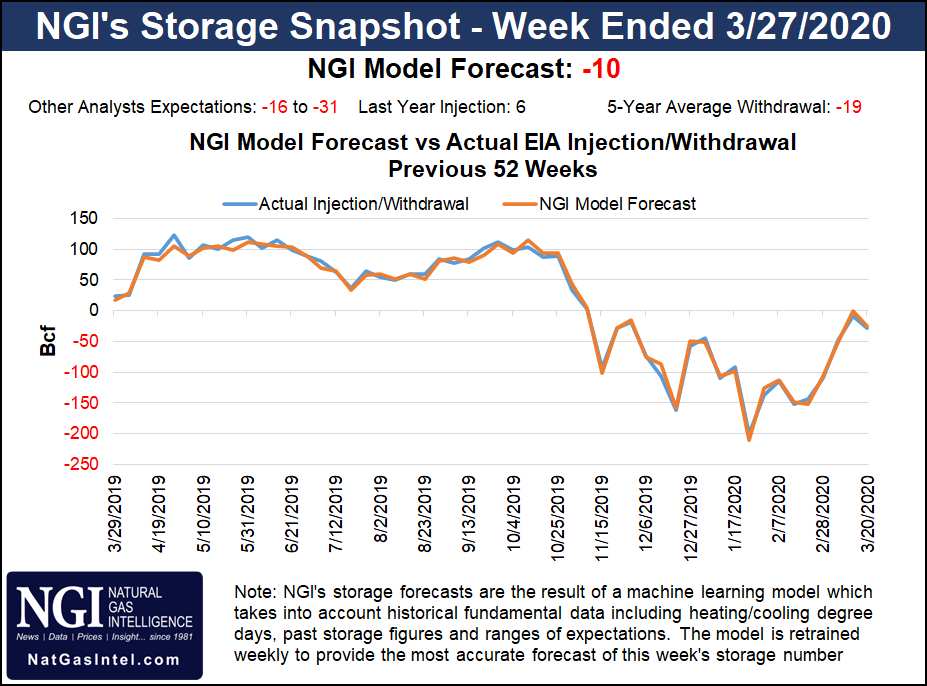 Cash prices were mostly a sea of red amid a lack of demand across most of the Lower 48, though some modest gains were seen out West. NGI’s Spot Gas National Avg. slipped 4.5 cents to $1.390.

The back-to-back losses for Nymex futures occurred as the market continues to grapple with the impacts, not yet fully known, from the Covid-19 pandemic and the ongoing oil price war. Gas prices thus far remain fairly well supported compared to other commodity markets, with the prompt month seemingly torn between anticipated near-term demand loss and expected market tightening and supply loss in the longer term, according to EBW Analytics Group. Further support is likely coming from marketers engaged in arbitrage transactions, the firm said.

However, the market’s delicate balancing act could be disrupted following Thursday’s government storage report, which may “provide the first solid indication of the impact of the coronavirus pandemic on U.S. demand for natural gas,” EBW said.

Estimates ahead of the Energy Information Administration’s (EIA) weekly storage inventory report ranged widely from a withdrawal as small as 16 Bcf to as large as 31 Bcf. A Bloomberg survey produced a median withdrawal of 31 Bcf, while a Wall Street Journal poll averaged at a 26 Bcf pull. NGI’s model projected a 10 Bcf draw.

NatGasWeather, which estimated a draw around 22-23 Bcf, said modelling the EIA storage figure is “tricky” due to a major switch in user demand as schools, businesses and factories close across the country but a greater number of people work from home.

Last year, the EIA recorded a 6 Bcf injection for the similar week, while the five-year average stands at a withdrawal of 19 Bcf.

In addition to the storage data, the latest unemployment figures are due out on Thursday, which, though not directly related to the gas market, could influence prices much like broader global factors have over the past few weeks.

Last Thursday, a record number of Americans filed for unemployment benefits as businesses shuttered amid the pandemic. The reported 3.28 million seasonally adjusted figure by the Department of Labor blew past even the highest of projections, prompting a widespread sell-off in equities that spilled over into natural gas despite a bullish EIA storage report.

Estimates for this week’s unemployment report show initial claims soaring even further as newly unemployed applicants file and previously filed applications are processed. Bloomberg consensus has the next figure at 3.72 million, up from 3.28 million last week.

However, with the implications of Covid-19 still unraveling, gas bulls continue to monitor news from U.S. producers on how they’re managing the new reality of widespread anemic demand and historically low oil prices. Every day, a new slate of producers are announcing plans to dramatically cut spending and activity.

The most recent Baker Hughes Co. rig data reflected the trend, with the pace of pullback proving to be much faster than what Genscape Inc. had projected; the firm now has revised its rig forecast lower. In the latest weekly production forecast update issued Monday, analysts said that Lower 48 rigs came in 15 rigs below forecast for the month, with gas rigs coming in two below forecast and oil rigs coming in 13 below forecast.

It’s still early in the game. Although dozens of exploration and production companies have made major changes to their budgets and production outlooks, several more announcements lie ahead. Furthermore, guidance is far from set in stone. Tulsa-based drilling rig expert Helmerich & Payne Inc. (H&P) on Tuesday implemented more spending cuts after beginning a wave of cost reductions last month, and others could do the same over the coming weeks and months.

As such, any unexplained movements in the natural gas market should be taken with a grain of salt. “It remains all about demand destruction, which is difficult to assess since we do not know the magnitude nor the duration of these demand losses,” Bespoke Weather Services said.

The gas market’s correlation to equities, which were down sharply on Wednesday, is expected to continue until there is any sort of clarity regarding how long these shutdowns will be necessary, according to the firm. This “is why this market is difficult to trade as of right now, keeping our near-term sentiment neutral, despite a bullish lean longer term.”

Cash markets retraced some of the recent gains mounted over the past couple of days as exceptionally mild weather prevailed over much of the United States.

Some brief cool periods on tap for the Northeast failed to keep the momentum going in the region, with Transco Zone 6 NY next-day gas tumbling 22.5 cents day/day to $1.375. Farther upstream in Appalachia, Tennessee Zn 4 313 Pool was down 17.0 cents to $1.300.

Meanwhile, Columbia Gas Transmission (TCO) continues to perform planned pigging on the Leach XPress system — “Line LEX” — spanning from West Virginia into Ohio, with impactful restrictions put in place for gas days Thursday and next Tuesday, limiting up to 216 MMcf/d of receipts and 607 MMcf/d of westbound flow, according to Genscape.

Genscape noted that “the impacted capacities will not be reinstated until the work is complete, which may affect Timely Cycle nominations for gas days between pig runs.”

Permian Basin prices also softened, but declines were minimal. Waha spot gas averaged 17.5 cents after shedding less than a nickel on the day.

Other points along the El Paso system also posted gains amid other ongoing maintenance, including NGI’s newest location point, El Paso Anadarko, which climbed 7.5 cents to $1.070.

Trading into El Paso Anadarko Pool has been increasing in recent quarters, according to NGI Director of Strategy & Research Patrick Rau. The rise occurred especially after the region received a boost from increased production from the Sooner Trend of the Anadarko Basin, mostly in Canadian and Kingfisher counties, aka the STACK, that began around the beginning of 2017.