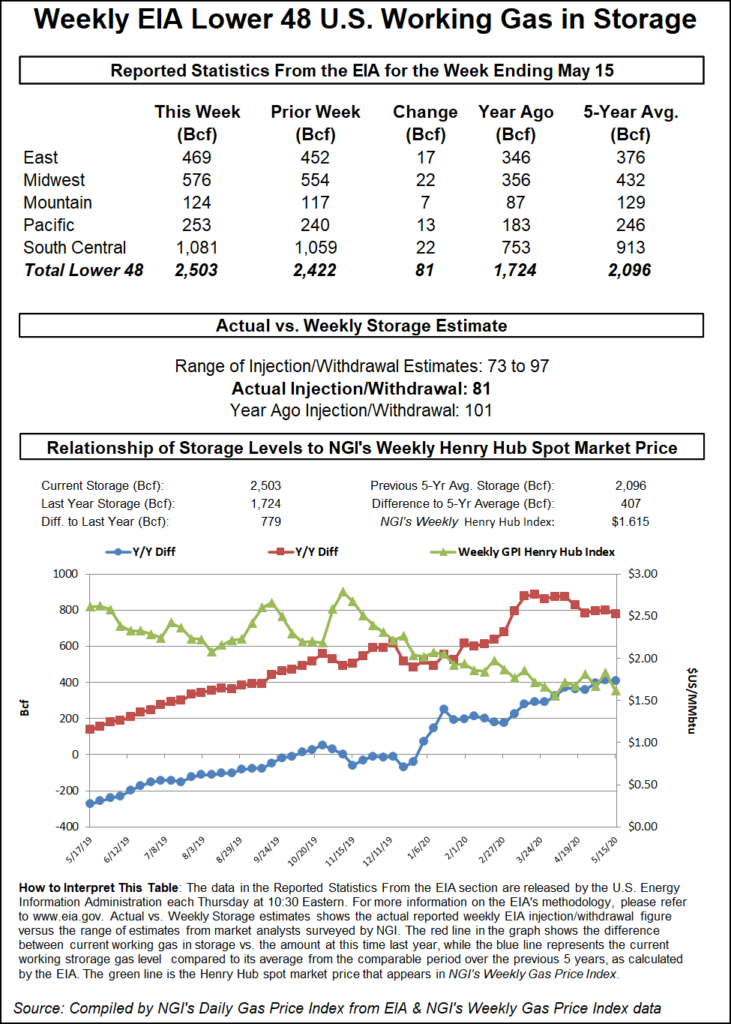 With summer heat not in the cards for at least a few more weeks, all eyes were on the latest government storage data to determine how impactful last week’s cold blast was. The U.S. Energy Information Administration (EIA) reported a smaller-than-expected 81 Bcf injection into natural gas storage inventories for the week ending May 15.

Bespoke Weather Services, which had projected an 85 Bcf injection, said it wasn’t reading much into the latest EIA figures despite the miss, as it was a “very heavy” heating degree day week and marked the end of any possible influence of heating demand.

“It does represent a little balance improvement, but far more important will be the trend in the next few EIA numbers, as this week’s data has shown some demand coming back,” Bespoke said.

Meanwhile, the biggest surprise in the EIA miss was actually in the South Central region, with the EIA’s reported 22 Bcf build coming in a little lighter than what market observers had predicted. The figure included an 18 Bcf build in nonsalt facilities and a 5 Bcf build in salts, according to EIA.

Elsewhere across the Lower 48, the Midwest added 22 Bcf into storage, and East inventories rose by 17 Bcf, EIA said. Pacific stocks increased by 13 Bcf and Mountain stocks grew by 7 Bcf.

Total working gas in storage as of May 15 stood at 2,503 Bcf, 779 Bcf higher than year-ago levels and 407 Bcf above the five-year average, according to EIA.

As for weather, models appeared to be kicking the can down the road when it comes to any semblance of summertime heat. Weather changes in the overnight data were mixed, with a small demand increase early next week, but a more notable cooler shift for early June in the eastern half of the nation, according to Bespoke. This comes as a weak upper level trough slides through the region as the West heats up.

“We also continue to see a lack of heat relative to normal in Texas and the South. All of this keeps the total demand picture rather tame over the next two to three weeks.”

The atmosphere, according to Bespoke, is not yet ready to dive into “La Niña mode,” which is why the focus of heat in early June sits in the West. The firm still sees the shift to a La Niña pattern ahead, “and we can see an overall hot summer, though the signal is stronger for heat in the back half of summer versus the front half.”

Until more demand arrives in the form of summer heat or further industrial reopenings, U.S. liquefied natural gas (LNG) cargo cancellations, and fear of further cancellations, will increasingly become a dominant price driver, according to EBW Analytics. The firm noted that public estimates of canceled cargoes continue to increase, “and the July or even August cargo-loading outlook appears unlikely to fare better than June.”

“The global LNG market remains untested, and it is unclear how the burden of curtailments will ultimately fall,” said EBW. “It appears that gas pipelines are ratcheting down supply in many corners of the world, from Turkmenistan to Gazprom to Algeria to Norway. Still, it appears that U.S. LNG export estimates are likely to be revised lower for July and August.”

However, in the case of Cheniere Energy Inc., any canceled cargoes may wind up back in the hands of the company’s marketing arm, which could sell the super-chilled fuel on the spot market. “The rumors are nearly as volatile as commodity prices, with July cancellations being foremost on everyone’s mind lately,” said Criterion Research LLC analyst James Bevan.

It was a sea of red for spot gas prices on Thursday as power burns started to buckle. A weather system remains stalled over the east-central United States, with temperatures expected to be rather comfortable in the 60s and 70s, according to NatGasWeather. This system is also leading to near-perfect temperatures over the South and Southeast as highs reach the 70s and 80s.

A second cooler system was bringing showers to the Northwest, while Texas and the Southwest are forecast to be “very warm to hot” the next several days.

The pattern through the start of June remains about the same as upper high pressure “just isn’t strong enough besides over the Southwest, thereby preventing widespread heat from setting up across the important corridor from East Texas to the Southeast,” NatGasWeather said. “As such, until highs of 90s become widespread across the southern and eastern United States, bearish weather headwinds will continue through at least June 3-4.”

Given the bearish headwinds coming from weather, sharp double-digit declines were seen across the country. On the West Coast, PG&E Citygate led the decreases as next-day gas dropped 17.0 cents to $2.460, though other pricing hubs in the region were close behind.

Rockies cash was down anywhere from a dime to 17.0 cents, while slightly deeper cuts were seen in Texas, where Houston Ship Channel spot gas was down 20.5 cents to $1.710.

Meanwhile, the in-service of the Cheyenne Connector and Cheyenne Hub Enhancement projects is in question. Tallgrass Energy LP filed in-service requests for both projects on Tuesday and noted a week of delay to a June 1 target start. Both requests also note that mechanical completion of the facilities is not expected until June 5.

“This is likely due to lagging construction timelines and fits well with our construction observations,” said Genscape Inc. analyst Colette Breshears.

Federal regulators may or may not grant approval before the mechanical completion of facilities and more restoration across the projects, according to Breshears. Cheyenne Connector said as of early this week, the 70-mile pipeline is 100% lowered in and backfilled, but tie-ins are only around 73% complete, and hydrotesting had not begun.

“Finishing/testing/drying the pipe and hitting restoration percentages,” which are usually required for approval by the Federal Energy Regulatory Commission, “should be achievable by the June 5 target,” Breshears said. However, “restoration in the in-service request was listed at just under 50% complete.”

Both 600 MMcf/d projects are fully subscribed by DCP Midstream LP and affiliates of Occidental Petroleum Corp. They would move processed Denver-Julesburg Basin gas to Rockies Express Pipeline for transport.

ANR Storage Co. issued a force majeure effective Thursday that limits injections to 144 MMcf/d through June 16, translating to daily cuts of up to 298 MMcf/d based on historical injections, according to Genscape Inc. The majority of daily injections during the months of May and June historically have been greater than the proposed limit, so the firm expected an immediate effect.

“Based off injections during May and June of 2019, we can expect to see daily average cuts of approximately 100 MMcf/d,” analyst Anthony Ferrara said. “However, ANR Storage inventory levels should not be at risk of being too low due to this event come withdrawal season. Storage levels are currently at a five-year high, sitting at 43.0 Bcf out of a 55.6 Bcf stated operational capacity.”

ANR did not provide a reason for the force majeure, Genscape noted.

On the East Coast, Algonquin Citygate cash was down 17.0 cents to $1.255, in line with other points in the Northeast and across Appalachia.