The Interior Department’s Bureau of Land Management (BLM) has issued a final supplemental environmental impact statement (SEIS) for Greater Mooses Tooth No. 2 (GMT2), a $1.5 billion development on Alaska’s North Slope first proposed by a subsidiary of ConocoPhillips three years ago. 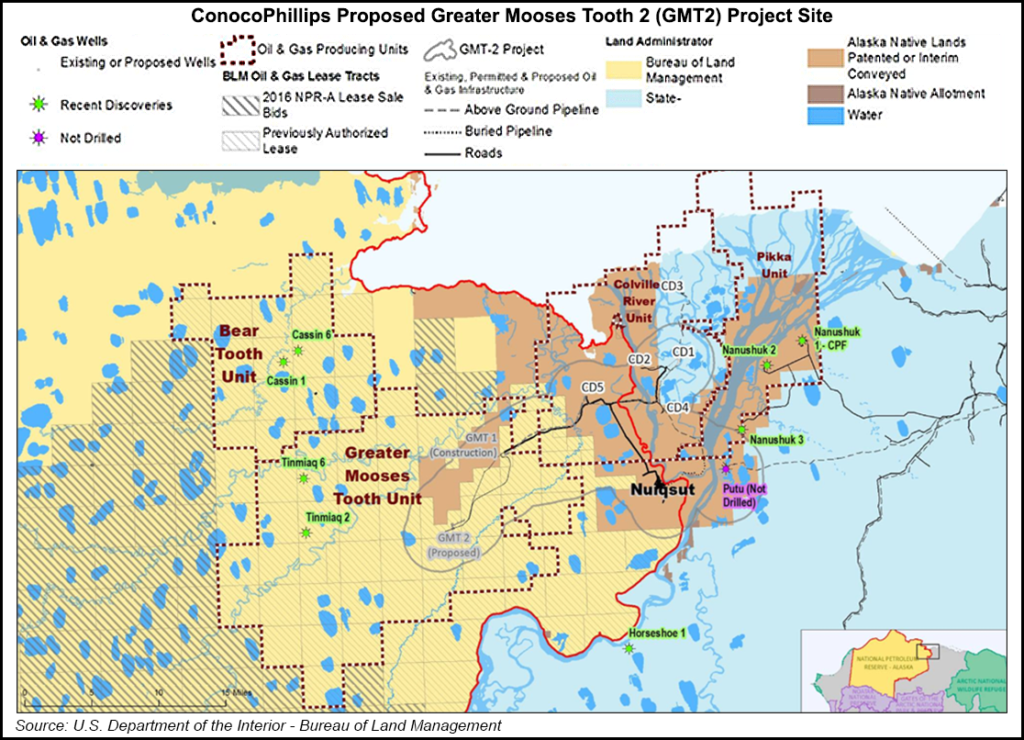 The proposed project, located entirely within the boundaries of the National Petroleum Reserve in Alaska (NPR-A), would include a 14-acre pad and up to 48 wells. BLM said an associated pipeline and access road would cross lands within the NPR-A managed by the federal government and Kuukpik Corp., an Alaska Native corporation.

GMT2 would also connect to ConocoPhillips Alaska’s Greater Mooses Tooth No. 1 (GMT1) development with an 8.2-mile road and an 8.6-mile pipeline. The Houston-based super independent approved $900 million for GMT1 in November 2015. During a 2Q2018 earnings call, Executive Vice President Al Hirshberg, who handles production, drilling and projects, said GMT1 is expected to achieve first production before year’s end with peak production of 30,000 b/d.

The Environmental Protection Agency (EPA) in the Aug. 31 edition of the Federal Registerpublished a notice of availability of the Alpine Satellite Development Plan. Oil recovered from GMT2, like GMT1, is to be processed at ConocoPhillips’ existing Alpine Central facility. EPA’s review period ends on Oct. 1. A draft SEIS was issued in March.

ConocoPhillips, Alaska’s largest producer, has yet to announce whether it will proceed with GMT2, which like GMT1 would also have peak production of 30,000 b/d. The company previously announced plans to begin construction this winter, with first oil planned in late 2021.

ConocoPhillips Alaskafirstfiled permits to drill the GMT2 project in August 2015, but the project was delayed following concerns raised by the Native Village of Nuiqsut. BLM said it developed the final SEIS “with local community involvement including public meetings in several North Slope communities,” including Nuiqsut. A BLM report issued in May 2017 on subsistence use areas said that Nuiqsut was the closest Native community to oil and gas activity on the North Slope.

GMT2 isn’t the only project on ConocoPhillips’ radar. Last July, the company said its Willow prospect in the NPR-A may hold up to 750 million boe, and could be rich enough to justifyconstructing a standalone oil hub. A final investment decision isn’t expected before 2021.

If it were to move forward, ConocoPhillips’ management has estimated that it could achieve first oil production from the Greater Willow area by 2024-2025 for about $2-3 billion spent for up to five years. The company then could quickly ramp up to full production, spending another $2-3 billion in cumulative drilling capital over multiple years.