The Energy Information Administration (EIA) surprised to the upside for the second week in a row, reporting a 137 Bcf withdrawal for the week ending Jan. 31 and providing natural gas futures some modest uplift Thursday morning. 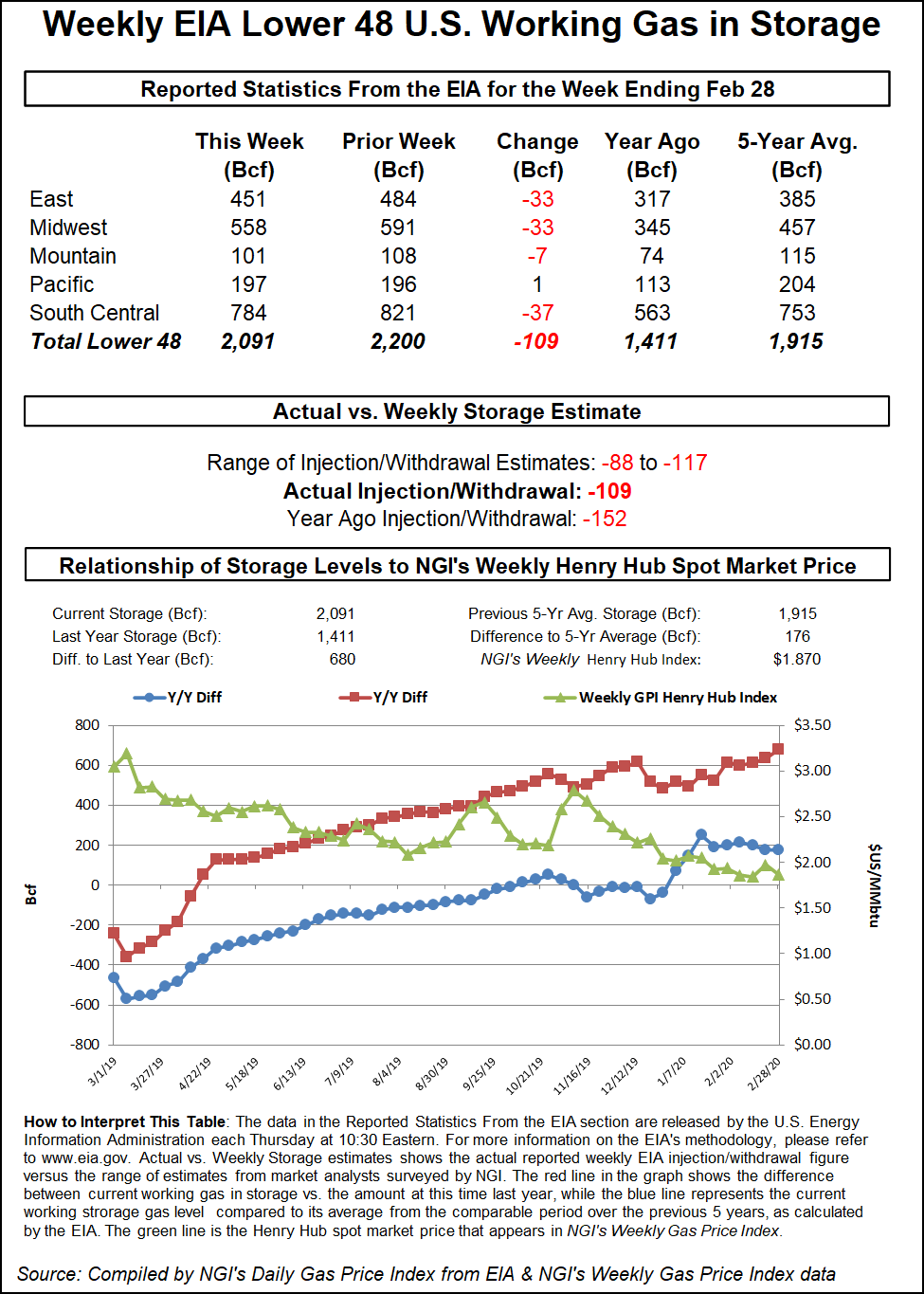 The reported withdrawal came in well above estimates that clustered near a 130 Bcf pull. A Bloomberg survey showed estimates ranging from 122 Bcf to 134 Bcf, with a median pull of 129 Bcf. A Reuters poll reflected a median draw of 131 Bcf. A Wall Street Journal poll included a draw as low as 109 Bcf, but averaged 127 Bcf. NGI projected a 125 Bcf withdrawal.

Nymex natural gas futures, which had been trading a couple of pennies lower day/day ahead of the report, quickly erased the losses but struggled to move much higher. As the EIA print crossed trading desks at 10:30 a.m. ET, the March Nymex contract jumped to $1.860, down only one-tenth of a cent from Wednesday’s close. By 11 a.m., the prompt-month contract was trading at $1.865, up four-tenths of a cent on the day.

Bespoke Weather Services said the 137 Bcf withdrawal “is another strong number,” among the tightest that it has seen when adjusting for weather.

“With this week’s data showing lower production, we should see another strong one next week, albeit lower in absolute terms given lower weather demand,” Bespoke chief meteorologist Brian Lovern said. “The pattern’s demand has been low enough to still outweigh the tighter balances. That, plus fears of liquefied natural gas shut-ins have kept pressure on prices.”

This week’s figure is still dwarfed by last year’s 228 Bcf withdrawal for the similar period, but it came in 6 Bcf below the five-year average withdrawal of 143 Bcf, according to EIA.

The South Central region led withdrawals, including a 38 Bcf pull from nonsalt facilities and a 16 Bcf draw from salts, which resulted in a net 54 Bcf draw, EIA said. The East pulled 40 Bcf out of storage, while the Midwest withdrew 36 Bcf.