As the market prepares to exit a decidedly underwhelming winter, Goldman Sachs Commodities Research analysts are slashing their 2020 natural gas price forecast from $2.50/MMBtu to $2.20. 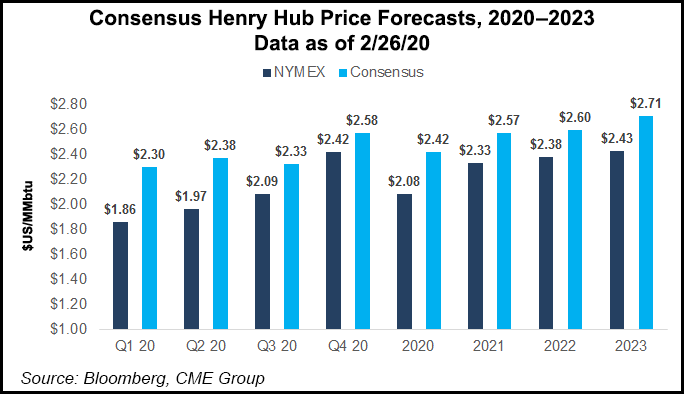 The firm’s latest projections would see New York Mercantile Exchange (Nymex) prices average around $2 for the first quarter, $2.10 for the second quarter and $2.20 for the third quarter, Goldman analysts Samantha Dart, Damien Courvalin and Huan Wei wrote in a note to clients published late Tuesday.

Prices for 4Q2020 and Calendar 2021 are forecast at $2.50, “as we expect a sequential tightening of the balance from next winter.”

Goldman also is lowering its expectations for Lower 48 production, trimming its forecast for the remainder of 2020 by 0.6 Bcf/d and by 0.4 Bcf/d for 2021; output is pegged at 94.1 Bcf/d for the rest of this year and at 95.6 Bcf/d for 2021, with the adjusted forecast “largely driven by a revision to our expected growth in the Appalachia region.”

Appalachia’s gas-focused producers aren’t the only ones under pressure to constrain activity in 2020, especially as the coronavirus outbreak has roiled crude markets. After dropping below $50/bbl in Tuesday’s trading, West Texas Intermediate futures continued to slide Wednesday, down about 51 cents to $49.39 as of around 12:30 p.m. ET.

“Crude would fundamentally be pushing $40” without cuts from OPEC, aka the Organization of the Petroleum Exporting Countries, analysts at Tudor, Pickering, Holt & Co. (TPH) said in a note Wednesday.

“A key issue investors struggle with on crude is a fundamentally unbalanced market, and further OPEC supply cuts (while potentially propping up the front end of the curve) could continue to pressure the back end for years to come as spare capacity grows,” the TPH team said. “Prior to the significant demand loss in 1Q2020, a look at global inventories during 4Q2019 suggested the market was 150,000 b/d oversupplied and had OPEC committing to an additional 500,000 b/d of curtailments to offset non-OPEC growth.”

Given the reliance on OPEC cuts to balance the market, U.S. growth has been resting on a “sandy” foundation over the last few years, according to TPH.

“While we do not expect a change in policy as it relates to cuts, basing a business model and strategy on hopes that global producers…will continue to cede market share keeps both equity and debt investors few and far between,” the analysts said.

TPH described a hypothetical “Black Swan event” in which OPEC reverses course on supply cuts, a scenario that it said could knock $10 off the price of crude and lead to dire outcomes in the North American onshore.

“Especially given the fragile state of the upstream business, a $10 shift lower in crude would not only fundamentally impair assets, causing significant losses for banks, equity and debt investors, but could mark the permanent liquidation of a growing number of U.S. upstream participants, as most of the sector does not generate meaningful free cash flow below $50/bbl, even in maintenance scenarios,” the TPH analysts said.

North American exploration and production (E&P) companies have been busy sharing their 4Q2019 financial results with investors, and TPH said U.S. shale operators appear to be “slowly moving in the right direction” in terms of shifting focus to shareholder returns and cutting capital spending on drilling. However, “more cuts are needed to balance the market,” they said.

“With 4 million b/d of supply offline and real demand destruction growing ever more apparent” amid the coronavirus outbreak, any arguments from companies “that industry needs any growth from U.S. shale” will be a “nonstarter for investors,” according to TPH. What OPEC does next “will be closely watched, as we suspect the crude markets are already factoring in a cut, and the U.S. upstream space continues to assume Saudi Arabia is willing to cede market share to make room for U.S. growth.”

Demand destruction from the coronavirus — which had begun to spread across Europe as of Wednesday, according to news reports — is likely to further complicate the outlook for U.S. liquefied natural gas (LNG) exports at a time when the market remains keenly focused on the potential for shut-ins on already-weak global pricing.

Growing oversupply in Northwest Europe has increased the risk that U.S. LNG export shut-ins would be required this summer in order to help rebalance the global market, according to the Goldman analysts.

“Although this is not yet our base case, we note that such a scenario would exacerbate the current oversupply in U.S. gas markets, likely triggering a race to the bottom in our view,” the analysts said. Nymex futures “would potentially sell off as a result of the further softening of U.S. gas markets associated with reduced LNG exports, which would likely be followed by” declines in Dutch Title Transfer Facility (TTF) and Japan Korea Marker (JKM) pricing in order to keep the arbitrage window shut.

“This process would linger until the U.S. market could rebalance through production shut-ins equivalent to the reduced LNG exports, with the burden of the adjustment likely falling on Appalachia producers, who face the widest basis to Henry Hub outside of associated gas basins,” according to Goldman.

That said, Goldman argued that the arbitrage window for exports to Europe will likely remain open, even after factoring in recent reports of canceled cargoes. The two canceled cargoes, confirmed Tuesday by Cheniere Energy Inc., appeared to be a case of the offtakers being “opportunistic,” according to Goldman. The analysts cited “anecdotal evidence of individual cargoes being offered in Europe” at a steep discount to TTF.

“The fact that the individual offtakers did not cancel their total U.S. liftings for the month suggests, however, that such deeply discounted cargoes may not be available in size at this point,” the Goldman analysts said. “We believe other opportunistic cancellations such as these may take place going forward, posing a risk to U.S. LNG export volumes, but at the moment we do not expect large volumes of U.S. LNG” to be impacted unless the arbitrage window to TTF “were to shut on a sustainable basis.”

Despite current weak pricing in the natural gas market, there are hopeful signs for bulls as capital cuts could help establish a floor, according to TPH.

“Unlike crude, the market is not artificially supported by voluntary/involuntary curtailments, and as U.S. oil growth slows, the associated market will see meaningful relief on fundamentals,” the TPH team said.

This comes as “the cost curve for gas has been blown through,” and TPH said a look at the economics for producers it watches that have hedges rolling off in 2021 or later shows higher-cost producers needing $2.50-2.75/Mcf “to stabilize production within cash flow.”

TPH further estimated around 55 Bcfe/d of production at risk from Appalachia, the Haynesville Shale and legacy dry gas basins, production that is held “primarily by operators with leverage and liquidity concerns,” according to the firm.

“While LNG may ultimately back up” into the United States during 2Q2020, “this further pressure on the spot and forward curve will solidify (or motivate) industry resolve to cut capital further to drive a necessary shift in supply to balance the market in 2021 and beyond, potentially leading to a recovery,” TPH said.