Looking back on the winter that wasn’t in his Monthly Energy Outlook issued March 23, Stephen Smith of Stephen Smith Associates is projecting wholesale natural gas prices near $6-$7 for the second quarter, “and depending on summer heat and hurricanes, possibly longer.”

Smith said his second quarter base case depends on West Texas Intermediate (WTI) oil at $57-$65, normal weather, “and no actual or imminent hurricanes impacting gas production through June.” As of June 30, Smith expects to see a gas-to-resid spread of minus $0.50 to minus $1.00/MMBtu. With 1% resid in New York Harbor assumed at $7.25/MMBtu that “would then imply a July Henry Hub bidweek price of $6.25-$6.75/MMBtu.

The “hair trigger” price behavior seen recently despite overfull storage, Smith attributes to “at least in part to the extraordinary hurricane activity of last year. Katrina and Rita have removed about 700 Bcf of gas from the market to date and the effects are still being felt.” Given how badly the market was burned last year, he finds the current prices and market behavior “not unreasonable.”

On the investment side Smith sees his company’s exploration and production company share index coming in 10%-15% higher by the end of the year. E&P shares are currently “pricing in” a sustained $5.94/MMBtu vs. $6.54/MMBtu last September and $4.66/MMBtu at the beginning of 2005. Continued tension in global oil markets should help hold gas values up despite the current “spring gas glut.” Smith says threats to the oil market include continuing and possibly escalating disruption in Iraq, Nigeria, Iran and possibly Venezuela.

For gas there is the threat of tropical storms, starting this year with Alberto, Beryl, Chris, Debby, Ernesto and so on through to William. Last season’s hurricanes used up the National Weather Service’s designated storm names and the last six storms were letters of the Greek alphabet.

Meanwhile Smith is projecting natural gas demand will decline for the year 2006 by 2.6%, following on a 2005 decline of 3.3%. Last year’s drop, which included declines in residential, commercial and industrial use, with only power generation increasing, was attributed to the high gas prices, plus some dropoff in industrial load from plants disabled by the hurricanes. The 2005 totals, however, were bolstered by increased power generation demand to cope with the near record high heat last summer. This summer is expected to see normal heat and this, combined with a very mild January and continued residential and commercial resistance to high prices is expected to drop gas demand this year. Only non-power industrial demand is expected to increase, and that will go up only 1% from 2005 to 2006, after dropping 3.3% in 2005 over 2004.

Smith’s model predicts a 1.8% decline in overall power generation in 2006, compared to a 1.7% increase in 2005. He computes the natural gas share of power demand by subtracting the generation expected to use the less costly fuels, hydro, nuclear and coal. The demand remaining is split between natural gas and oil, with gas generally getting 85% of the split in recent years, Smith estimates.

He predicts temperatures for the rest of 2006 conforming to 10-year norms which — barring major hurricane disruption — should mean a 5.7% decline in gas-fired power generation this summer compared to the near-record heat and cooling degree days (CDD) experienced in summer 2005. Also, contributing to this decline is the coming on line of new, more efficient gas-fired generating plants and the retiring of older inefficient plants. The power generation demand includes utility plus industrial use for heat and power.

The decrease in residential demand for natural gas, which Smith projects to be 3.2% less in 2006 than in 2005, will be greater than the expected 2.5% decrease in heating degree days (HDD) due to the continuing conservation reaction to high gas prices. In a similar fashion commercial demand is projected to show a greater decrease of 3.5% than the 2.5% decrease in HDD.

All other gas demand, which mainly includes industrial use for feedstock and process gas use in the refining; chemicals; metals; stone, clay and glass; pulp and paper; and food processing industries, is expected to increase 1.0% in 2006 after declining 8.5% in 2005, primarily due to plant shut-downs after the hurricanes, plus chemical plants that were uneconomic to run with the high gas prices. “Barring a comparable hurricane season, most of this capacity is now operable, and gas prices in the $6-$7 range now allow for economic operation,” Smith said. 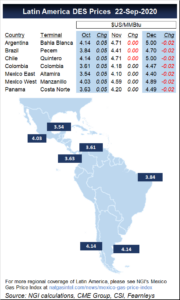