Although investors were disappointed by the Utica Shale production figures released last week by the Ohio Department of Natural Resources (ODNR), a surge in production should be at hand in the play as infrastructure comes online, according to an analysis from RBN Energy LLC. 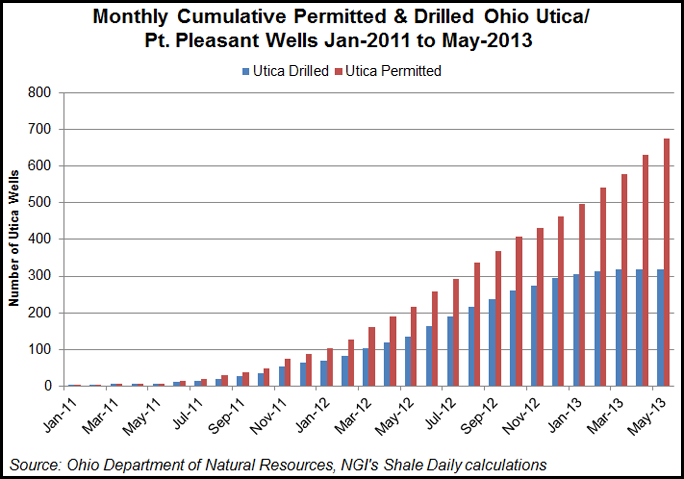 In a blog post Monday, RBN analyst Sandy Fielden also predicted that midstream companies in the Utica will face a host of new challenges as significant condensate production comes online.

Last week, the ODNR reported that 87 wells in the Utica collectively produced 12.84 Bcf of natural gas and more than 635,000 bbl of oil in 2012. Industry experts responded by saying they were disappointed with the results, but conceded that a clearer picture was beginning to emerge over the location of the play’s sweet spots for oil (see Shale Daily, May 20; May 17).

“Actually, the news is not all bad and we need to look deeper to understand the results and the real opportunities in this play,” Fielden said. “Part of the reason that the ODNR results are misleading stems from the fact that 2012 drilling in the Point Pleasant shale formation in Northeast Ohio — the sweet spot for producers — was targeted in that part of the shale that produces primarily wet gas and not oil.”

Fielden said producers were attracted to the oil window along the western edge of the Utica, but they weren’t as successful there because the oil was locked in low-pressure formations. That, in turn, led the producers to target the wet gas area of the play in search of natural gas liquids (NGL).

“But when the analysts see data that indicates higher natural gas production they conclude that the Utica is a gas play rather than an oil play and expectations are reduced,” Fielden said. “That is because low natural gas prices relative to oil mean that ‘gas’ plays don’t generate the same excitement in the financial community as oil plays.

“However, it seems likely that the wet gas area of the Utica will produce large volumes of NGL and condensate. While these liquids may not be quite as valuable as oil they do provide considerable uplift over and above the price of natural gas.”

Fielden cited 1Q2013 production figures from Gulfport Energy Corp. as reason to remain optimistic (see Shale Daily, May 9). According to Fielden, the Oklahoma City-based company, the third largest producer in the Utica, reported its first 14 wells averaged an initial production of 807 b/d of condensate, 7.8 MMcf/d of natural gas and 946 b/d of NGLs. Broken down, the production mix was 36% condensate, 36% gas and 28% NGLs.

“That is 64% liquids, and that is very good news for well economics,” Fielden said.

The analyst said ODNR figures were also misleading because there is a sizeable number of wells that have been drilled but are not currently in production. He said that to date, the ODNR had approved 660 permits for horizontal wells, of which 326 have been drilled but only 97 are in production. The ODNR broke the 600 mark for horizontal well approvals in April (see Shale Daily, April 19).

“Producers are holding off bringing wells into production until pipelines, natural gas processing plants and other infrastructure is complete,” Fielden said, adding that the largest producer in the play, Chesapeake Energy Corp., “reported only moderate Utica Shale production growth last year because they were sitting on wells and waiting for infrastructure.

“At the end of the third quarter 2012, nearly 40 Chesapeake-operated Utica Shale wells had been drilled but were not yet producing. Since these wells are not producing they do not show up in the ODNR production data and the lack of ‘actual’ production weighs heavy on analysts used to hearing about dramatic increases in production every month in North Dakota. In this environment, no news is viewed as bad news.”

Fielden said Ohio should expect to see a surge in gas and liquids production in 2013 because significant takeaway and processing capacity was coming online in the Marcellus and Utica shales over the next six months — including the Mariner West pipeline by MarkWest Liberty Midstream & Resources LLC and Sunoco Logistics Partners LP, and expansions at three MarkWest facilities in West Virginia (see Shale Daily, May 13; Nov. 12, 2012).

“That new infrastructure will allow producers to unleash their inventory of completed wells into production,” Fielden said.

The analyst said that if there was a downside to the changing landscape in the Utica, it was the anticipated jump in condensate production.

“Not that condensates are a bad thing, it’s just that their value seems to be generally misunderstood — by producers, refiners and especially by analysts,” Fielden said. “Condensates seem to be like problem children…variously lumped in with crude production from oil wells and with NGL production from gas wells.

“The reality is that in shale basins where the liquids output from gas wells is as high as it appears to be in the Utica, condensate has to be recognized for what it is and handled as a product its own right. Unfortunately that means the infrastructure challenge in the Utica is not just one of building pipelines and plants to process natural gas and NGLs. A whole other set of infrastructure is also needed to process and market the large volumes of lease condensate being produced from wet gas wells.”