Anadarko Petroleum Corp., Colorado’s largest oil and natural gas producer, is shutting in more than 3,000 vertical wells in the northeastern part of the state after a mid-April explosion killed two men in a recently built home in Weld County located about 170 feet from one of the company’s wells. 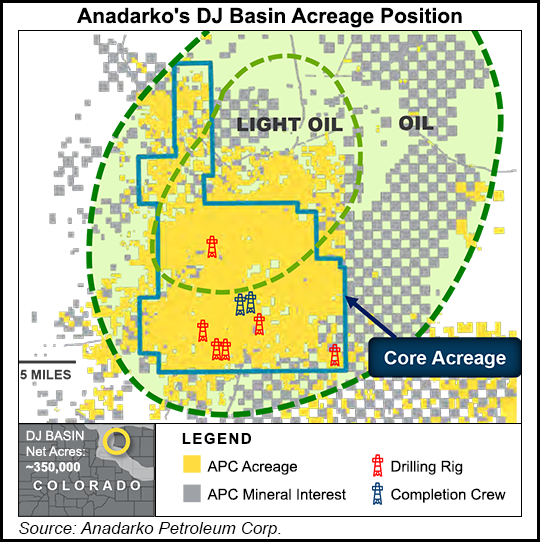 The fatal blast, which occurred about 4:30 p.m. on April 17 in Firestone, killed Mark Joseph Martinez, 42, and his brother-in-law, Joseph William Irwin III, also 42. The explosion and fire quickly consumed the two-story home, emergency responders said. Critically injured was Martinez’s wife Erin Martinez, who was airlifted from the scene. Her 11-year-old son was transported by ambulance to a medical facility and released the same day.

Anadarko said the vertical oil and gas well near the home had been drilled in 1993 by a previous exploration and production company owner. The wells shut-in pending an investigation were producing a total of about 13,000 boe/d net.

“While these events remain under active investigation and much remains to be determined, in an abundance of caution, since the company operates more than 3,000 producing vertical wells of the same vintage, it has taken proactive measures to shut in all vertical wells across the counties in northeast Colorado where it operates,” an Anadarko spokesman said. “The wells will remain shut in until the company’s field personnel can conduct additional inspections and testing of the associated equipment, such as facilities and underground lines associated with each wellhead.”

Anadarko, which controls about 350,000 net acres in the Denver-Julesburg (DJ) Basin of northeastern Colorado, had sales volumes in the basin of 244,000 boe/d in 4Q2016, representing an increase of around 15,000 boe/d year/year.

“Particular focus is being placed on areas where housing and commercial developments are occurring in close proximity to existing infrastructure,” the super independent said. “The wells will not be restarted until each has undergone and passed these additional inspections. Anadarko currently anticipates the process will take two to four weeks, depending on weather,” the company said.

Said CEO Al Walker, “This terrible tragedy has left all of us with heavy hearts, and the families and their loved ones are in our thoughts and prayers. Words cannot express how saddened we are that this occurred in a community where many of our employees, their families, and friends live and work. We share the community’s gratitude for the courageous response of neighbors and nearby construction crews who quickly came to the aid of the family, as well as the first responders and others who made sure surrounding homes were kept safe.”

Anadarko, headquartered in The Woodlands north of Houston, has been working with fire officials and state regulatory agencies since the fatal incident.

“Our teams will remain actively engaged with residents in the Firestone community,” said Anadarko’s Brad Holly, senior vice president for U.S. onshore exploration and production. “Colorado residents must feel safe in their own homes, and I want to be clear that we are committed to understanding all that we can about this tragedy as we work with each investigating agency until causes can be determined.”

Separately, the Frederick-Firestone Fire Protection District in Colorado said officials had determined there was no threat to surrounding homes. It also said it had contacted nearby residents.

COGCC Finds No Danger for Neighborhood

The Colorado Oil and Gas Conservation Commission (COGCC), which is working with local authorities, has been investigating the incident since April 19, including “directing environmental sampling and inspecting oil and gas wells in the vicinity,” along with Anadarko “oil and gas operation southeast of the property” involved in the fatal explosion.

As well, COGCC is reviewing the legacy well’s history, identified as the Coors V6-14Ji, and evaluating whether additional steps should be taken to review activities across the region.

During a news conference Thursday, COGCC Director Matt Lepore said the exact cause of the explosion remains under investigation, but he said there is no danger to people living in the surrounding homes.

Anadarko’s decision to shut in wells was made “virtually after the incident” but not made public until Wednesday, he noted.

The well that exploded was drilled initially by Gerrity Oil and Gas Corp. to the Codell formation at a depth of 7,912 feet, according to Colorado Department of Natural Resources Executive Director Bob Randall. He was at the press conference with Lepore.

The well was acquired as part of package by Patina Oil and Gas Corp. in 2001 and reformatted to the J-Sand formation. The Coors well then became part of an acquisition by Noble Energy Inc. in 2005, and Anadarko later acquired it. Noble and Anadarko swapped some acreage in the DJ in a deal conducted in 2013, but it’s unclear whether the Coors well was part of that package.

COGCC engineering and field inspection staff responded to the scene the day of the explosion and has been there every day since, Lepore said.

“Our role has been mainly to provide technical support and subject matter-related expertise of gas operations to the Frederick Firestone Fire Protection District,” he said.

Environmental staff obtained environmental samples outside the home and another home immediately to the west. COGCC now is reviewing the files of the Coors well and 11 other wells in the immediate vicinity of the home.

On Wednesday a COGCC consultant surveyed the neighborhood using a vehicle-mounted methane and hydrocarbon detector to determine if there were any fugitive methane sources or other hydrocarbon gases in the neighborhood, and none were detected, Lepore said. A soil survey was to be done on Thursday to assess for hydrocarbons specifically near the destroyed home.

Near-Term Actions Not Yet Determined

Anadarko acted “voluntarily,” Lepore emphasized, and he said COGCC was not considering requiring other nearby oil and gas operators to shutter their wells.

“When we have a more complete understanding of the circumstances involved here, we will consider whether near-term actions will be required by operators on a field-wide basis or a statewide basis to assess specific issues identified as a result of this investigation,” he said.

The COGCC regulates the distance between a new well and existing building units/other buildings but it does not regulate the distance that a home may be constructed from an existing well. That distance is under the jurisdiction of local governments, Lepore said.

“While the well in the vicinity is one aspect of the investigation, this is a complex investigation and the origin and cause of the fire have not been determined,” said Firestone Fire Chief Theodore Poszywak. The department is continuing to gather and analyze evidence to determine the cause of the blast and plans to release the findings to the public “without delay” when they are complete.

“We are fully engaged in this investigation to a final determination unimpeded by speculation to bring honor and any closure possible to the family and our community,” Poszywak said. The department’s “priorities are to ensure the safety of the neighborhood, and to complete a systematic, thorough and timely investigation to determine a conclusive cause.”

A GoFundMe page, initially set up to raise $100,000 for the Martinez/Irwin families, as of Thursday afternoon had received more than $107,500 in donations.

Colorado’s oil and gas industry had to fight back after ballot initiatives in 2014 and 2016 attempted to severely limit development. The industry prevailed in both cases, but the Firestone tragedy “may have the potential to alter public perception or at least put that thought in minds of investors,” said analysts with Seaport Global Securities Inc.

Several attempts have been made by Colorado legislators to establish wide setbacks from drilling, all of which have failed. Democratic State Rep. Mike Foote of Lafayette sponsored legislation earlier this year that would have required oil and gas operations to be at least 1,000 feet from schools and other high occupancy buildings. The bill, HB 1256, died on a Republican party-line vote.

“If it was caused by the well located a mere 170 feet away from the home, hopefully the state will finally act to set reasonable drilling setbacks,” Foote said. “Let’s wait to see what the investigators determine before making any final conclusions.”

State Sen. Matt Jones, a Democrat from Louisville, also sponsored the failed setback bill. “This whole situation is tragic,” he said. “My heart aches for the family that lost loved ones and had others injured in the explosion and fire…The Colorado Bureau of Investigation needs to get to the bottom of this. And the Colorado General Assembly needs to take action on the results to protect Coloradans.”

By mid-afternoon Thursday, Anadarko’s share price on the New York Stock Exchange had fallen by almost 6%, off almost $3.50/share to $56.47, the largest decline in nine months.

Wells Fargo Securities LLC senior analyst David Tameron said shutting in 13,000 boe/d for up to four weeks would not be that meaningful for Anadarko cash flow or volumes, which totaled 774,000 boe/d in 4Q2016. However, “we believe there will be an overhang (concerns around regulatory and/or litigation) on shares until more clarity is reached.”

Other DJ producers also “might feel some pressure resulting from this incident,” including Noble Energy Inc. and PDC Energy Inc., and to a lesser extent Extraction Oil & Gas Inc. and SRC Energy Inc.

“We recommend near-term caution until more definitive information is released with respect to what caused the accident,” Tameron said.

Tudor, Pickering, Holt & Co. estimated Anadarko’s second quarter output would be negatively impacted by 4,000 boe/d, including 1,000 boe/d of oil “should the inspection process remain on track. However, investors may be concerned by potential regulatory blowback against the industry pending the results of ongoing investigations.”

Macquarie Research analyst Paul Grigel thinks any impact from the shut-in wells will be limited. “We believe the ultimate impact on financials and the company is likely to be de minimis but do recognize this will likely be a near-term focus until the investigation by local fire officials is complete.”

TheDJis one of only three U.S. targets to receive major funding by Anadarko this year; the others are the Permian Basin and the deepwater Gulf of Mexico. This year Anadarko plans to spend about $840 million in the DJ, with the rig count averaging up to six. About 290 new wells are planned.