Anadarko Petroleum Corp.’s Third Creek midstream gathering system in Colorado, which provides service for about 30 natural gas producers, has been taken permanently out of service following an assessment. 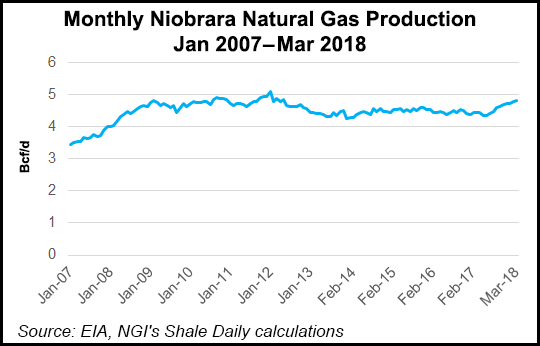 The system gathered about 6 MMcf/d of natural gas, which is less than 0.5% of Anadarko’s total gathering capacity in the Denver-Julesburg (DJ) Basin. Anadarko, Colorado’s largest producer, averaged more than 260,000 boe/d from the DJ during the first quarter, an 8% increase from a year ago.

“After closely assessing the system, we took the Third Creek gas gathering system permanently out of service Tuesday,” spokeswoman Jennifer Brice told NGI’s Shale Daily. “Given the very small volumes currently handled by the system, permanently shutting the system down is the safest and most appropriate decision.”

Producers first were notified last July that the system would be shut in to provide them enough time to develop alternative solutions, she said.

“We have worked cooperatively for several months with the customers to provide time for them to find alternatives. We recognize this may create hardships for some producers that utilize the system; however, our commitment to safety and the environment must take precedence.”

Anadarko has acted proactively regarding the safety of its operations following a home explosion last year in Firestone, CO, which killed two men and critically injured a woman. Following the explosion, which was linked to a severed flowline, all of Anadarko’s 1-inch gas flowlines that ran underground from vertical wells in northeastern Colorado were disconnected. Other DJ operators also disconnected their flowlines for inspection.

All of Anadarko’s northeastern Colorado wells, both newer horizontal and older vertical wells, also underwent a rigorous safety inspection, which consisted of more than 25 steps to look at the wellhead, infrastructure and flowlines.