Anadarko Petroleum Corp.’s ability to synchronize its upstream spending with midstream solutions, thereby avoiding bottlenecks and gaining the best prices, proved a winning method in the Denver-Julesburg (DJ) Basin, and it’s now being duplicated in the Permian Basin. 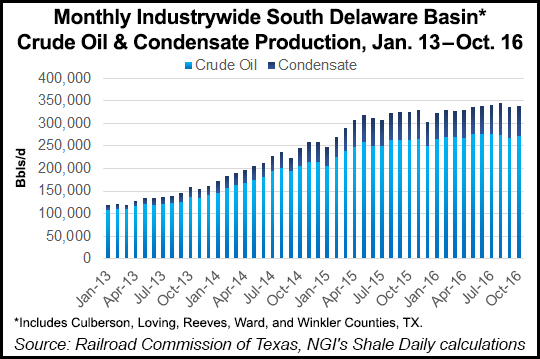 CEO Al Walker discussed the 4Q2016 and full-year 2016 results during a conference call Wednesday with his management team. In the past two months the super independent has sold off Marcellus Shale and Eagle Ford Shale properties, as it continues to pursue the “three Ds” — the Permian’s Delaware sub-basin, the DJ and the deepwater Gulf of Mexico.

Like so many of its competitors, Anadarko’s Priority No. 1 this year is the Delaware. Competing with a plethora of explorers is tricky, as more oil and gas is unearthed looking for takeaway. But Anadarko long ago found that overseeing midstream building gave it a leg up on the competition, Walker said.

“I think you’ve seen us invest heavily through the years in midstream to the point where we try to philosophically deliver an upstream result with a midstream solution…And that has kept us from not sitting there for days on in waiting for pipeline connection. That’s a really hard thing to do given the activity level in a basin like the Delaware.”

“One of the things we focus…very closely on is making sure that the takeaway capacity meets the growth profile in the Delaware Basin,” Moore said. “That’s probably the hardest topic on people’s minds. It is important to realize in the bigger picture there is about in West Texas, there is 2.6 million b/d pipe capacity and refining demand and products running 2.2 million b/d.

“And we track about 1 million b/d of new projects in phased development from the pipeline developers. I think they’re doing a nice job of anticipating growth in the industry, and we are very involved in those discussions…There is a nice balance going on between producers’ growth profiles and what the infrastructure developers are doing on the crude oil side of things.”

Natural gas and natural gas liquids facilities serving the Permian “will spike to run about two-thirds full,” Moore said. “It’s sort of the same story, that the overall matching of the takeaway capacity and producer growth profiles is reasonably well choreographed. It’s not perfect. But generally, we’re comfortable with that.”

The ability to master infrastructure timing has proved to be a winning strategy, Walker said. Ramping up in the Delaware is “a little bit different” than it was in the DJ, which was done over a longer term. At the frenetic pace that the Permian is being developed, “our asset teams are working very closely with midstream to make sure they understand where we’re moving.”

When a producer is testing “such a big acreage position” as in the Permian, “it’s not always easy for our midstream,” said the CEO. “But the fact that we’re in sync with what we’re trying to accomplish helps tremendously.”

As Anadarko ramps up rig activity in the Permian, the midstream component is already in the game. “So there’ll be a big spend there the next two years,” but Anadarko is “just making sure that we have the infrastructure in front of us.”

Walker said he wasn’t trying to be “braggadocios,” but “we have for a long time taken the view that midstream is a solution for an upstream success.” The producer, headquartered in The Woodlands north of Houston, is “able to control our own midstream and then takeaway capacity. Whether it was in the DJ and now the Delaware, I think is part of the recipe for why we’ve been successful.

“We’re not likely to have the same bottlenecking issues that have potential for putting a lot of hydrocarbons on the side, until markets open up…And I do think again, without being overly braggadocios, that is a differentiating factor for us.”

“From a global perspective, we’re beginning to see some encouraging demand improvements and supportive supply actions,” he said. “And I continue to feel strongly that we have a very good chance to see an average WTI oil price in 2017 of $60.

“When you combine our cash position with improving cash flows, we expect to be in advantageous position to fund growth in both the Delaware and the DJ, as well as the deepwater. We also expect we have the potential to add to these positions through bolt-on acquisitions to further enhance the scale and to capitalize on our competitive advantages.

“The three Ds give us a clear line of sight, to short-cycle oil investments with attractive wellhead margins, that will help drive our expected five-year compounded annual growth rate for oil of 12-14%, assuming a $50-60 oil price environment. Later this month, we will recommend the capital program to our board that reflects our confidence that Anadarko can deliver attractive growth and value through the balance of this decade and beyond.” An analyst meeting is scheduled for March.

“I think the Delaware, the DJ and the deepwater Gulf of Mexico — in that order of priority — will receive capital,” Walker said.

Anadarko partners in part of its Permian leasehold with a unit of Royal Dutch Shell plc, a venture that is scheduled to be completed this summer. Walker was asked if separately or alone the companies had considered any merger/acquisition activity.

“As it relates to Shell, we have a lot of confidence in them as a partner,” he said. “They do a very good job. We have a good working relationship with them. I think there is opportunities for both of us to figure out how to do things mutually better, and by that I mean, there may be some situations and…

“There may be things where we can find opportunities to block up and acreage where it’s a win-win for both of us or some other things that frankly are not necessarily addressed in the joint venture. But we’ll still continue to be active with one another, even after the joint venture expires mid-summer.”