Anadarko Petroleum Corp. and Noble Energy Inc. have swapped a combined 100,000 net acres in the Greater Wattenberg Field in northern Colorado, leaving both companies with more contiguous acreage positions in the liquids-rich play. 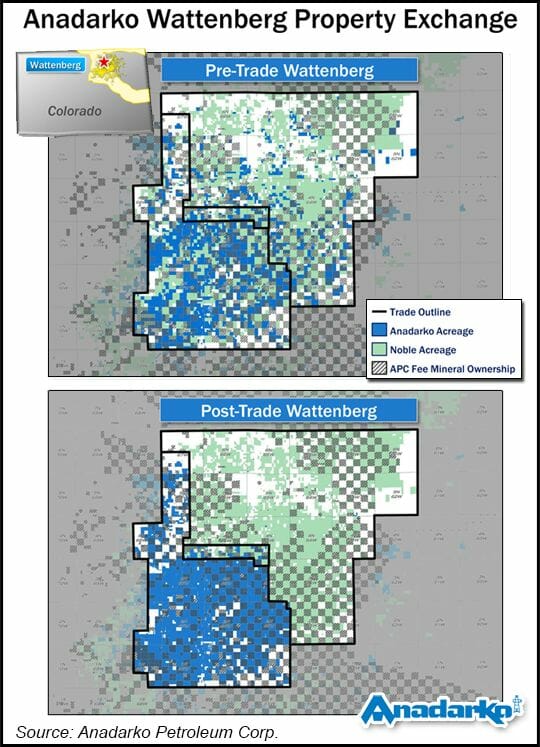 Both companies contributed 50,000 net acres to the exchange, which closed Monday and took effect Jan. 1, 2013.

The swap gives Anadarko more acreage in its core position in the Wattenberg (see Shale Daily, May 8; Aug. 3, 2012), and allows the Woodlands, TX-based independent to retain the benefits of its Colorado Land Grant mineral ownership on approximately 21,000 acres being conveyed to Noble.

Meanwhile, Houston-based Noble also receives 50,000 net acres, plus $202 million as reimbursement for capital spent to drill and complete wells on the acreage it conveyed to Anadarko. Other adjustments offset the $202 million figure, and Noble said it ultimately received $105 million at the closing.

Based on current production levels, the exchange is expected to lift Anadarko’s production by 8,000 boe/d, almost all of which will come from the new wells at the heart of the $202 million reimbursement. Consequently, Noble’s production rate is to decline by 8,000 boe/d.

“This short-term reduction in production is anticipated to be quickly offset with operational efficiencies and cost savings,” Noble said Monday. “For 2014, the company’s DJ [Denver-Julesburg] Basin volumes are still expected to grow at a rate of at least 20%.”

The trade is subject to customary post-closing adjustments.

Noble COO David Stover concurred. “This strategic transaction will create numerous synergies for both Noble Energy and Anadarko, and allows us to maximize the value of this premier oil asset, as acreage is consolidated in key operating areas,” he said.

“As we move forward with our integrated development plans within the DJ Basin, we expect to realize significant efficiency improvements including centralized field facilities, streamlined operations and reduced land work. The large contiguous acreage blocks will provide the opportunity to optimize drilling activities and add more extended-reach lateral wells to the program.”

According to company reports, Anadarko operated 12 horizontal rigs and drilled 83 total wells in the Wattenberg during 2Q2013, with production averaging 52,000 boe/d. Net sales for the quarter averaged 106,100 boe. By comparison, Noble operated nine rigs in the Wattenberg during 2Q2013, drilled 75 wells and completed 69 wells. DJ Basin production averaged 90 MBoe/d for the quarter.