Anadarko Petroleum Corp. may hold a trove of leaseholds across the United States, but the portfolio of the future is guiding for growth from only three areas, the Permian Basin’s Delaware formation, the Denver-Julesburg (DJ) Basin and the deepwater of the Gulf of Mexico, executives said Tuesday. 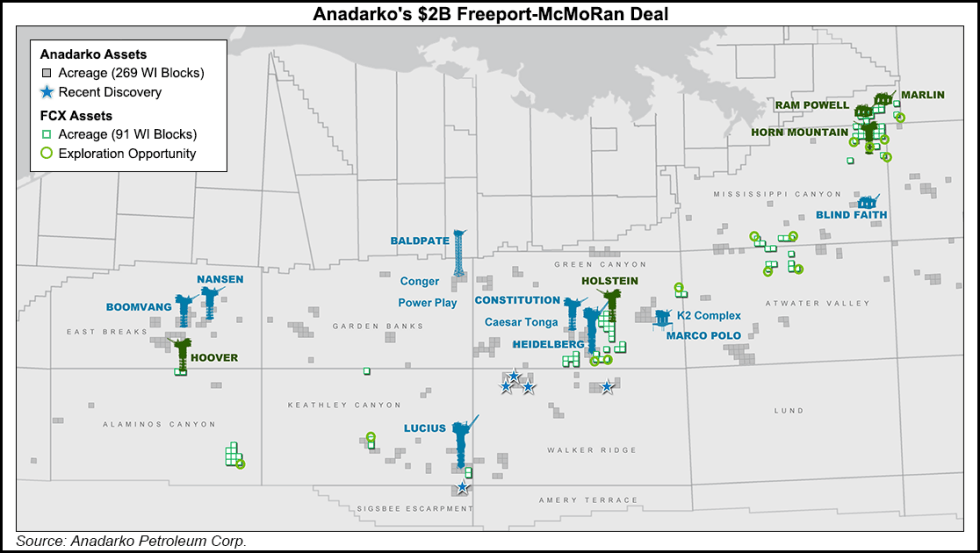 The trio of plays is to take most of the capital expenditures in the near term, CEO Al Walker said during a conference call to discuss third quarter results. Total sales volumes in 3Q2016 totaled 72 million boe, or 780,000 boe/d, with the three Ds contributing the bulk.

“Operationally, we have accelerated activity by adding two rigs in the Delaware Basin and West Texas,” he said. “The company has made great strides to enhance the economics of our premier position in this world-class oil play. This has been achieved by further cost reductions while incorporating an enhanced completion design that’s increased our estimated ultimate recoveries to more than 1 million boe per well, which enjoys a very high oil cut.”

With the added drilling activity in West Texas, plans are to “rapidly evaluate new stack pay potential across our almost 600,000 gross acres in this position,” and begin development in 2017.

Anadarko also raised two more rigs in the DJ during the third quarter, and plans to drill 90 more wells while completing 50 others.

When combined with base optimization, the company expects to add more than 5 million boe “well above our expectations,” the CEO said.

In the high-dollar GOM, Anadarko’s Lucius platform, which it operates and majority controls, achieved a daily record of 100,000 b/d-plus in the latest period. Along with new production from development wells at K2 and Caesar/Tonga, year/year oil volumes from the deepwater increased by 10,000 b/d to 65,000 b/d.

Cash flow generated by Anadarko’s $2 billion-plus purchase in September of Freeport McMoRan Inc.’s GOM portfolio is expected to be a catalyst to increase spending in the Permian and DJ (see Shale Daily, Sept. 13). However, the Freeport assets also should double Anadarko’s offshore production to about 160,000 boe/d, Walker said.

But it’s the U.S. onshore that analysts were most focused on during the question and answer session. Walker was asked about the high prices that buyers are willing to pay for acreage in the Permian. One asked specifically about RSP Permian Inc.’s recent deal to pay $2.4 billion to acquire Delaware-focused Silver Hill Energy Partners LLC (see Shale Daily, Oct. 14). Silver Hill’s acreage is adjacent to some Anadarko leasehold.

“As I’ve looked at how these acreage values have increasingly gone to places I would never have imagined, we’re seeing people pay price per acre today that exceeded acreage values when oil was over $100,” Walker said. “Consequently I think we have a little bit of pause around just the valuations and how certain of these have escalated in places…”

Merger and acquisition activity in the Permian is far from over, he said.

“In addition addition to the Wolfcamps, it’s the Avalons, the Bone Spring…I don’t think we’re done…I think I saw something…that said we might see $100 to $100,000 of values per acre out here pretty soon. I’m not sure I can imagine that, but I also can’t believe that we are double where we were in 2014 per acre basis either.”

Anadarko’s operations chief Darrell Hollek said the Wolfcamp formation, which runs within the Delaware and Midland sub-basins, may be the “largest prize, not that the other ones won’t contribute to our bottom line overtime.”

The Wolfcamp A is “by far the best zone, because it has a number of benches. We’re not discounting the Avalon and Bone Spring. We think they have a lot of potential. But at this point, we are going to some of the deeper depths and testing that first. We will get to that eventually, but right now we’re really focused on exploiting the Wolfcamp and understanding exactly what we have in our position, and we have been pretty pleased as to what we found to date.”

The focus on the three Ds means that something has to give. Recent reports indicated that Anadarko may be shopping its Eagle Ford Shale position, with SM Energy Co. rumored as a potential buyer. Walker did not answer questions about a possible sale directly. But he made clear where the money is going.

“As we continue to talk more about the fact that we see the Delaware, the DJ and the deepwater Gulf of Mexico being our growth engines, I think in that cascading order…that’s where we would put incremental dollars to work…If we additionally have cash beyond that, I don’t think that would change the queuing.”

The three Ds aren’t the only places that would be funded, the CEO said.

“I think the point we’re trying to make is that we are, and have been for most of the last year and a half, consistently explaining that we are moving away from natural gas as a focus for investing. We’re in moving into oil- and the liquids-concentrated opportunities, and we are trying to simplify the way in which we think about…our onshore business. And that means that our focus is going to go into two particular plays.”

To date, the company has closed almost $3 billion of asset sales and on Tuesday it increased its 2016 full-year divestiture-adjusted sales volume guidance by 8 million boe from initial expectations. The “line of sight” is to more than $4 billion of monetizations for the year, Walker said.

Streamlined operations and a stronger financial position “provide confidence in our ability to deliver a 10-12% compounded annual oil growth rate over the next five years.”