Anadarko Petroleum Corp. reinforced its move away from natural gas this week, announcing it would exit the Marcellus Shale with the sale of its upstream and operated midstream assets for $1.24 billion to a subsidiary of privately-owned Alta Resources Development LLC, giving that company re-entry to the play. 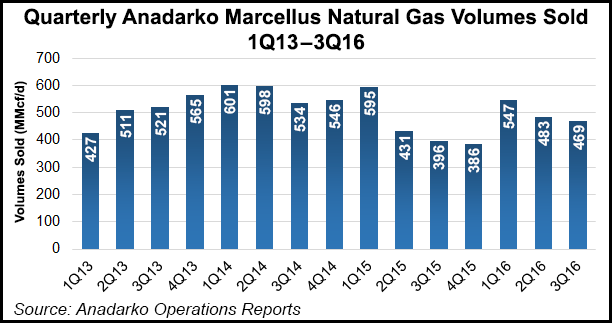 Anadarko’s divestiture includes 195,000 net acres in north-central Pennsylvania that were producing 470 MMcf/d at the end of 3Q2016. The company sold all of its operated and non-operated upstream assets. Midstream assets owned by Anadarko’s master limited partnership, Western Gas Partners LP, were excluded.

“With this transaction, we have announced or closed monetizations totaling well in excess of $5 billion in 2016, while principally focusing Anadarko’s U.S. onshore activities on our world class oil-levered assets in the Delaware and DJ (Denver-Julesburg) basins,” CEO Al Walker said.

While Anadarko has leaseholds across the United States, it has been high-grading its portfolio to evolve around oil and liquids production, focusing primarily on the Permian Basin’s Delaware formation, the DJ Basin and the deepwater Gulf of Mexico. It has rarely mentioned the Marcellus, except in marketing discussions, and analysts believe the company’s 388,000 gross acres in the Eagle Ford Shale of South Texas could be next to go.

The Appalachian assets were sold to Alta Marcellus Development LLC. Houston-based Alta has drilled or participated in more than 175 wells in Arkansas, Texas, Louisiana and Alberta, Canada. It acquires, develops and monetizes assets. In 2008, after it sold Fayetteville Shale assets in Arkansas, the company began acquiring leasehold in the Marcellus and later sold those assets in 2010. After that, with financial support from Blackstone Capital Partners, it built a position in the Duvernay Shale in Alberta and eventually sold those assets to Chevron Corp.

The company notes on its website that it is “seeking to acquire North American shale assets to operate over the long-term and to enhance the value of such assets with our technical expertise.”

Analysts noted that much of the value in the Anadarko sale was tied to the upstream assets. State records show the company has wells permitted in Centre, Clinton, Lycoming and Sullivan counties, with the bulk located in Lycoming. To the west and north of that acreage, other operators have opened a new front in Utica Shale development, testing successful wells and planning for more.

Japanese trading firm, Mitsui & Co., which bought into Anadarko’s Marcellus assets in 2010, said it would sell part of its stake in the play to Alta Resources for $207 million, divesting about 20% of its Marcellus interests. Anadarko said its sale is expected to close during 1Q2017.