Anadarko Petroleum Corp. is hiking its capital spending by more than one-third this year as it works to raise Permian Basin resources by 50% and Denver-Julesburg (DJ) resources by 33%. 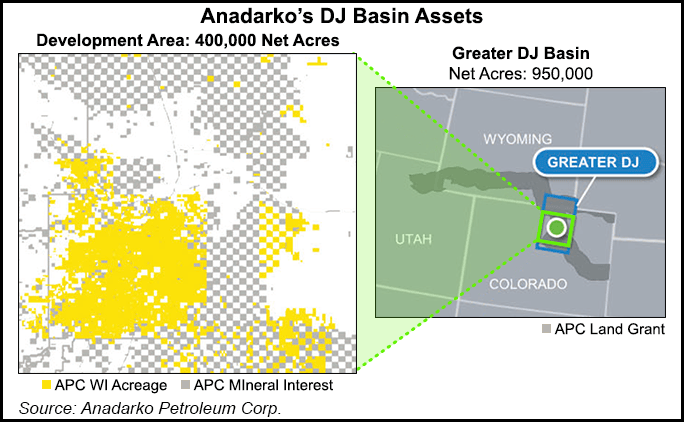 The $4.5-4.7 billion capital expenditure (capex) plan, about one-third higher than in 2016, earmarks 80% for the United States as the super independent enriches the onshore portfolio and builds growing deepwater Gulf of Mexico (GOM) operations, maintaining a “Three D” mantra to focus on the Delaware, DJ and deepwater.

“Our 2017 initial capital program is designed to leverage our streamlined portfolio and sharpened focus on higher-margin oil production, which is expected to generate stronger returns and substantial cash flow to fund material growth over the next five years,” said CEO Al Walker. “With a growing lower-risk resource base of more than 6.5 billion boe in our premier U.S. focus areas of the Delaware and DJ basins, and the deepwater Gulf of Mexico, I believe Anadarko is poised to deliver exceptional value in 2017 and well beyond.”

Close to $1.9 billion of the capex is being allocated for the U.S. onshore, while another $1.9 billion total would be directed to the deepwater/international operations and exploration, and for liquefied natural gas (LNG) projects. About $600,000 would be set aside for the midstream arm as infrastructure is built out.

The planned investments “provide the foundation for our increased five-year oil growth expectations of more than 15% on a compounded annual basis at current prices, and we are prepared to be flexible throughout the year if we see the opportunity in the Delaware and DJ basins to accelerate activity to capture additional value,” Walker said.

About $820 million is being allocated to Delaware upstream activities, with an additional $560 million to build a midstream backbone for future growth. An average of 10-14 operated drilling rigs are planned in the Delaware, with 150-plus wells drilled.

In the DJ of northeastern Colorado, Anadarko plans to spend about $840 million on upstream activities. The operated rig count should average five to six, with 290 wells planned.

In the GOM, plans are to leverage infrastructure and drill seven development tiebacks this year. In addition, Anadarko expects to benefit from a full year of production from the recently acquired Freeport-McMoRan Inc. properties, whichdoubled sales volumes to more than 160,000 boe/d at the end of last year.

Exploration and LNG development continue to be differentiating components of Anadarko’s business as well. This year the company expects to invest $770 million in its deepwater and international exploration program and in the massive LNG project in Mozambique. In addition, Anadarko plans to drill up to 10 exploration/appraisal wells in the deepwater GOM, Cote d’Ivoire and Colombia. The company expects to continue advancing the Mozambique LNG project, where it “has made good progress” on the legal and contractual framework.