Potential drought-busting rain and snow falls in California and the greater West Coast are offering the possibility of substantial above-normal hydroelectric supplies for the spring and summer, which could dampen natural gas requirements for thermal power generation in the region. 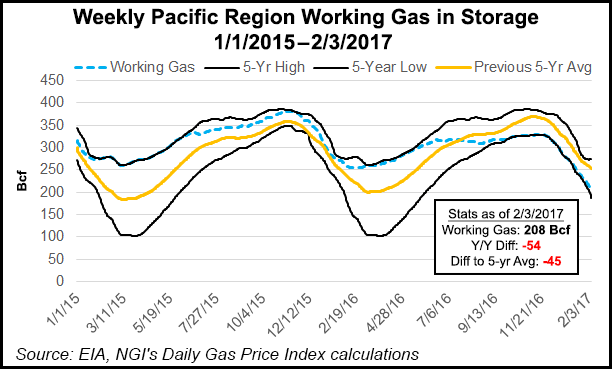 “If the above-average water forecast for hydro holds up through the spring, we can expect lower gas demand for electricity generation, perhaps significantly lower,” said Dan Kirschner, executive director of the Northwest Gas Association (NWGA).

While California officials have not yet lifted a longstanding drought emergency declaration, at the beginning of February they cited the Sierra Nevada snowpack as being at 173% of normal, and there have been several more sizable storms through the area since then. More rain and snow is forecast for the next two weeks.

Slightly more than half of the state is still classified as being in drought, but that is a sharp improvement from last year at this time when 95% of California was classified as such.

In the Pacific Northwest, the Northwest Power and Conservation Council (NWPCC) uses various sources, such as the Northwest River Forecast Center, to track the regional water situation each year, and its sources paint a very favorable picture.

“The water picture in the Columbia River Basin is looking pretty darn good right now,” an NWPCC spokesperson told NGI, adding that the Canadian portion of the Columbia Basin is between 90% and 115% of normal in most places.

“Northern Idaho and western Montana look real good, and southern Idaho is also in real good shape [more than 100% of normal], and in some cases is quite a bit above 100%,” he said.

While there are still trouble spots in the region, such as northeast Oregon, water supplies in the farthest reaches of the basin where the runoff passes through the most dams on its way south, the water levels are in good shape, the spokesperson said.

“Runoff at Grand Coulee Dam through early February was 158% of normal since October,” he said. “Runoff at Mica in British Columbia is 126% and that is the farthest dam from the ocean, and thus, the dam with the most valuable water for hydroelectric supplies.”

Kirschner said NWGA’s annual forecast is weather-normalized and therefore does not consider year-to-year variations in weather. “That said, we know that natural gas is the marginal generation fuel in the Northwest; first fuel off, last fuel on after hydro, nuclear, wind and coal,” he said. As an example, he cited low gas loads in 2011, a year of huge water and wind supplies in the region, compared to 2015, which was a very low water year.