After three days in the green, natural gas futures’ rally finally came to a halt on Friday as the pressure from lackluster weather-driven demand and notably improved supplies proved too much to overcome. The Nymex November contract closed out the week at $6.748/MMBtu, off 22.4 cents on the day. December futures slid 19.5 cents to $7.047. 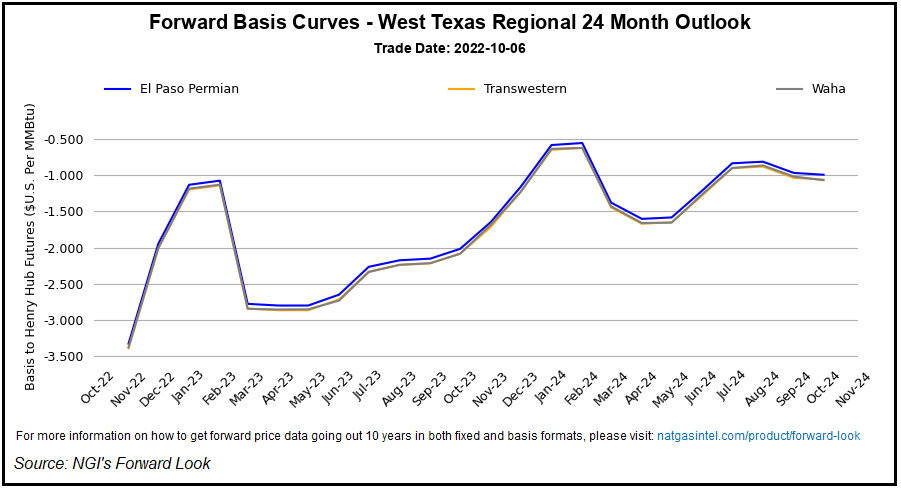 The downside for futures was not surprising given the slew of unsupportive fundamentals in play. On Friday, traders were still digesting the latest inventory data – and adjusting upward their estimates for the next government report and beyond.

The Energy Information Administration (EIA) said stocks for the week ending Sept. 30 rose by 129 Bcf, the largest fall injection on record and well above expectations ahead of the EIA report. The triple-digit build lifted stocks to 3,106 Tcf, which is 165 Bcf below year-earlier levels and 264 Bcf below the five-year average.

Tudor, Pickering, Holt & Co. (TPH) analysts said the 129 Bcf injection indicated the market was more than 5 Bcf/d oversupplied for the reference period, compared with 3 Bcf/d oversupplied the prior week. Given the rise in production north of 100 Bcf/d in recent weeks, the investment firm is now modeling stocks to reach more than 3.5 Tcf at the end of the injection season (Oct. 31).

“…Recent shifts in supply and a string of 100-plus Bcf builds have lessened the risk/reward for this upcoming winter and pose further downside risk to our 2023 outlook should weather this winter prove normal or lean warm,” the TPH team said.

Looking ahead to the next EIA report, preliminary modeling points toward a build of 126 Bcf, according to TPH. This would compare to the 82 Bcf five-year average and continue the trend of looser-than-normal builds and tightening storage deficits.

That said, NatGasWeather warned that it was a dangerous weekend to hold positions given the potential for the weather data to add demand. Models are struggling whether potential weather systems over South Canada find ways to bleed cooler air into the northern United States beginning around Oct. 14.

“Weather trends have been inconsistent” in recent days, “and we expect they will remain so over the weekend and where decent run to run swings in forecast demand should be expected,” NatGasWeather said. “Overall, weather patterns are still viewed as bearish, evidenced by larger-than-normal builds lining up several more weeks deep, and despite bouts of cooling across the Midwest and Northeast.”

Of course, there’s also the risk of major news out of Europe regarding energy policies and the continued Russian invasion of Ukraine, the firm noted.

Swedish Security Service officials said Thursday the damage to the Nord Stream (NS) pipeline systems that connected Russian natural gas supply to Western Europe was caused by detonations and more than likely sabotage. Sweden’s counter-espionage and counter-terrorism officials disclosed some of the first official conclusions into the incident since gas leaks in the Baltic Sea were detected in late September.

Meanwhile, President Biden remains committed to supporting robust levels of LNG exports in support of Europe’s efforts to strengthen supplies before winter, ruling out any limits on natural gas exports. The president at a Thursday campaign rally in New York made clear he was closely monitoring moves by Russian President Vladimir Putin.

Given the ongoing volatility and uncertainty overseas, NatGasWeather expects the battle for $7 gas to resume at Monday’s reopen. “It will be of interest whether bears gaining slight momentum late this week carries over to next week.”

Spot gas prices cratered at the end of the week despite chilly conditions in the Midwest and on the East Coast.

Even with overnight lows tumbling into the 20s and 30s in some areas, spot gas prices fell sharply throughout those regions. Iroquois Zone 2 cash slid 72.5 cents day/day to average $5.595 for gas delivery through Monday, and Columbia Gas dropped 71.0 cents to $5.325.

Prices were much lower in West Texas, where tight pipeline capacity and low demand led to wide discounts there. Waha spot gas averaged only $3.505 for the three-day gas delivery through Monday after dropping 62.5 cents on the day.

Part of the drop in prices upstream in the Permian Basin is because of falling demand downstream in the West. AccuWeather said the West Coast has been mostly warmer than normal so far this fall. In Seattle, temperatures reached a balmy 74 degrees on Thursday, near the daily record of 78 set in 2014. The average for this time of year is 64 degrees.

Farther south in Fresno, CA, temperatures were expected to hit 95 on Friday, also near the seasonal record.

However, AccuWeather said a big change is in store beginning Monday. A dip in the jet stream is expected to move into Washington before dropping even farther south Tuesday and Wednesday. Although the West Coast will cool down, the biggest effects may be felt farther east.

Snowflakes could fall at the highest elevations in western Montana Tuesday afternoon, according to the forecaster. The chance of snow would then move southward Tuesday night, with Yellowstone National Park potentially getting a light snow accumulation.

Despite the coming plunge, prices across the West plummeted on Friday. Cheyenne Hub cash fell 79.5 cents on the day to average $5.380, and Northwest Wyoming Pool lost 75.0 cents to average $5.395.

Beginning Friday, Clay Basin reservoir is shut in completely for seven days as MountainWest carries out the final phase of injection testing. Injection and withdrawal nominations will be accepted for the planned return-to-normal service date Oct. 14.