The surprise storage injection of 106 Bcf reported for the week ending Sept. 18 expanded the overall surplus U.S. natural gas inventories have over both year-ago and five-year levels. But lagging inventory in parts of the Midwest could cause concern this winter despite an increase in supplies available for the region, sources say. 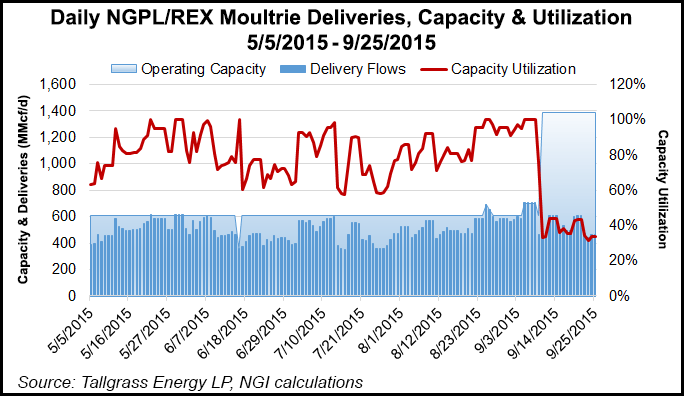 “Winters are still about ensuring supply,” said NGI’s Patrick Rau, director of strategy and research. “The nice thing about storage is you know where it is, and it’s already right there. Who is to say that gas coming into the Midwest from other pipes will actually show up on critical days?”

Indeed, while the new capacity reduces the need to have inventories at traditional start-of-winter levels, rising prices in the Northeast could attract flows eastward when needed, according to Rick Margolin, a senior natural gas analyst with Genscape of Louisville, KY. The firm provides real-time data and intelligence for commodity and energy markets.

The hike in Northeast prices is also expected to incentivize presently shut-in and choked-back Marcellus/Utica production to come online if given the proper price signal, Margolin said.

“Right now, our Spring Rock group is estimating there’s nearly 1 Bcf/dof production in the Northeast that has been shut-in/choked back purely due to weak prices. Should prices ramp up enough, that production can and likely would come online,” Margolin said.

Meanwhile, it appears the new capacity in the Midwest has yet to be fully utilized.

“REX is bringing a good amount of gas into NGPL via its interconnect at Moultrie, IL, (currently 468,693 Dth/d for Sept. 25 flow, according to NGI’s Rockies Express Zone 3 Tracker) but there hasn’t really been an increase in flows since the East-to-West reversal,” said NGI’s Nathan Harrison, market analyst.

Flows have averaged 510,604 Dth/d since NGI began tracking Moultrie flows on May 5, he said.

“While delivery capacity has been expanded (almost doubled) at both Moultrie and REX’s interconnect with ANR at Shelby, IN, the actual deliveries haven’t caught up with capacity,” Harrison said. “This being the case, I would expect prices in the Midwest to focus more on storage levels than possible additional supply.”

Winter 2015-2016 prices at both the Chicago citygates and Michigan Consolidated Gas averaged about $3.13 on Sept. 24, according to Forward Look. This represents a decline of about 45 cents from what winter prices averaged last year.

Meanwhile, after this week’s much larger-than-expected build to storage, it appears concerns about the acceleration in restocking have resurfaced, said Teri Viswanath, director of commodity research at BNP Paribas.

This week’s reported 106 Bcf build to inventories elevated stocks to 466 Bcf above year-ago levels and 148 Bcf above the five-year average.

“Yet, with just a few weeks left of the official injection season, there appears to be little need for further discounts to manage surplus supplies,” Viswanath said. “Despite the reacceleration in inventory restocking, the price-induced accommodation that has taken place this season leaves sufficient space in storage to manage the excess.”

Moreover, sub-$2.50 pricing would likely invite a substantial increase in fuel-switching that is unnecessary given the increased replacement demand from retiring coal units, Viswanath said.

Given the concentration of coal unit retirements in June, the replacement demand appears to be accelerating during the second half of this year as gas generators are utilized to replace the aggregate lost plant capacity.

“Consequently, the higher level of shoulder-season demand and ample room to manage the supply surplus will likely prevent an exaggerated sell-off during the last few weeks of the season,” Viswanath said.

The Nymex October contract was trading in the mid-$2.50s just after 2 pm EDT Sept. 25, a few cents lower than the previous day’s settle.