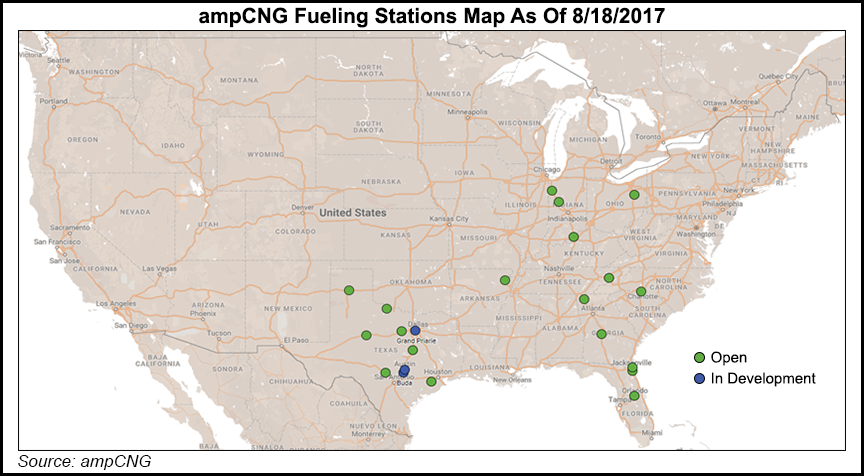 Through its AmpCNG fueling stations, AMP produces and markets renewable natural gas (RNG) as part of providing CNG fuel and infrastructure for the heavy duty, commercial trucking sector. The PE infusion would allow the company to pursue growth opportunities “across its businesses,” a spokesperson said.

AMP plans to apply the funding to its three business units: Renewable Dairy Fuels in Indiana, ampCNG’s network of 20 public access fueling stations, and ampRenew. The company has built the business on converting dairy waste into transportation fuel.

EIV Capital Managing Partner Pattie Melcher said the PE firm was attracted to AMP’s’ “history of leadership and innovation,” and is positioned to thrive.

AMP CEO Grant Zimmerman said the company aims to raise the scale of its business with some “aggressive growth plans. EIV Capital has an excellent track record of growing energy businesses and will help us as we invest in new biogas production, new fueling stations and in growing our team.”

In Southern California, Love’s Trillium CNG said it is helping Oxnard-based Gold Coast Transit expand its CNG use. Love’s plans to design and build a private CNG station for the transit agency that should open in late 2018. With a capacity to fuel 125 buses, the facility in Ventura County would accommodate up to 400 employees, according to the Gold Coast General Manager Steven Brown.

Another CNG fueling company, TruStar Energy, said by the end of this year its stations would be pumping up to 80 million gasoline gallon equivalents (GGE). It also open one or two TruStar branded CNG stations annually using a modular, no-cost-to-the-customer compact fuel station and CNG fleet development dual approach.

TruStar plans to be “methodical” in its approach, said Vice President Aaron Lay of sales/marketing. “We do a fleet analysis and give operators what they need. ”If you built it, they will come’ is not in our vocabulary.”