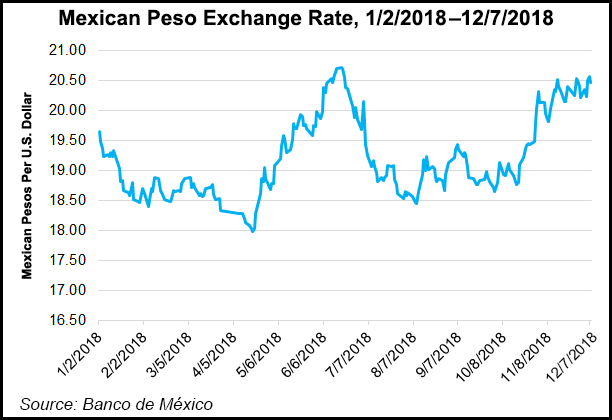 In his inaugural speech on Dec. 1, LÃ³pez Obrador called the “neoliberal economic policy” of the preceding government “a disaster” and “a calamity.” He was particularly critical of the 2013 liberalization of the formerly state-dominated energy industry through a constitutional reform.

A few days later, national power grid operator Cenace suspended a long-term electric power supply auction previously scheduled for Dec. 18 because of the change in government. Then, last Tuesday (Dec. 4) a group of bondholders said it would reject an offer by the Mexican government to buy back $1.8 billion of the $6 billion in bonds issued to fund the $13 billion international airport outside Mexico City, a project that LÃ³pez Obrador in October pledged to cancel, even though construction has already begun.

A prolonged sovereign debt dispute could have a deleterious effect on the government’s finances and credit rating, analysts have warned, while the manner in which the airport cancellation was decided — a referendum in which less than 1% of the population voted — is seen as indicative of an ad-hoc governing style incongruent with long-term investment of any kind.

“I think that a lot of the mistakes that they [LÃ³pez Obrador’s government] are making actually reveal their lack of understanding of several technical issues,” GMEC energy consultancy founder Gonzalo Monroy told NGI’s Mexico GPI. “If they want to buy back [the bonds], they will have to buy back at a premium, and if you’re buying back at a premium, then why not continue with the actual airport?”

On Wednesday the other shoe dropped for the energy sector as LÃ³pez Obrador confirmed that he would suspend oil and gas bid rounds for three years. He said whether the rounds continue or not would depend on how quickly projects awarded under previous tenders begin producing.

Competitive bidding processes for the supply of power and hydrocarbons are a hallmark of the 2013 constitutional energy reform that LÃ³pez Obrador has repeatedly slammed as a betrayal of Mexico’s sovereignty.

In his daily morning press conference last Thursday, the president doubled down on his opposition to the legislative change, telling reporters, “I’m still waiting for the defenders of the reform…to offer an apology to the people of Mexico.” Proponents of the reform “bombarded” the government “with opinions that it was going to be the salvation of Mexico…and it was a complete failure.”

On Friday, the new president called on legislators to approve an austerity bill to slash salaries and perquisites for top-level bureaucrats. The austerity agenda includes a bill to reduce the president’s salary by more than half, with a stipulation that no government employee may earn more than the president.

“I think that the…impact will be felt very shortly,” Monroy said, explaining that without the necessary expertise in both the hydrocarbons and electric power segments, “it’s going to be harder for the new administration to implement their plans, whatever they may be.”

The most high-profile resignation was that of former CNH head Juan Carlos Zepeda, who left his post four months before his term was slated to end.

LÃ³pez Obrador also said during his first week that his government would unveil detailed plans shortly on the construction of a $8.6 billion refinery in Tabasco state, as well as a strategy to combat the growing problem of fuel theft by organized criminals from Pemex infrastructure.