Mexico so far has determined to hold off from measures seen in other Latin American nations as it confronts the dual blow of the coronavirus and plummeting oil prices. 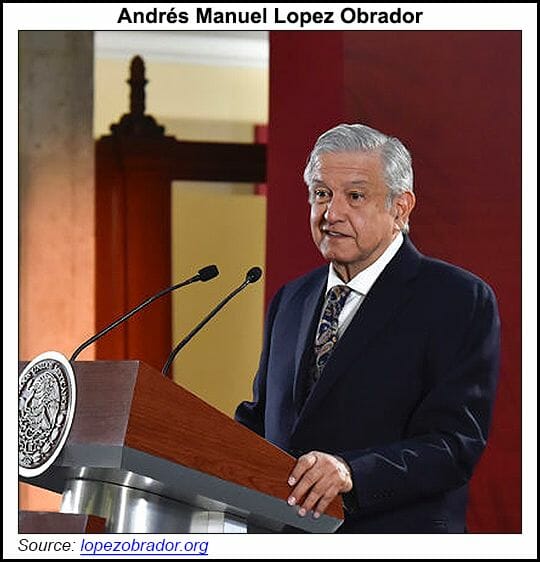 “We have faith and enthusiasm that we are going to go forward and get through this,” Mexican President Andres Manuel Lopez Obrador said Monday morning in his daily presser.

Schools will shut later on this week in Mexico, but the country has yet to impose the harsh measures seen throughout Latin America, where public health systems are notoriously weak. Argentina, Chile, Peru, Colombia and Central American nations El Salvador and Guatemala, for example, have announced they are closing borders in a bid to slow the spread of the virus and give health authorities time to prepare. Mexico had 53 cases as of Monday, according to Johns Hopkins University.

Still, his calm and urging to not give in to “alarmism” have done little to ease economic anxiety. The Mexican peso slumped 5% on Monday, exceeding the 23 pesos/dollar mark for the first time. Moody’s Investors Service issued a warning that falling oil prices and dropping demand could mean state oil behemoth Petroleos Mexicanos (Pemex) would require “significant” help from the government in 2020, which could impact the rating of both the sovereign and the national oil company.

On Monday Raymond James & Associates Inc. analysts Pavel Molchanov and John Freeman said the oil market is likely “to get much worse in the near term,” with West Texas Intermediate (WTI) likely testing $20/bbl in 2Q2020 “before rebounding strongly in the second half of 2020” and exiting the year at $45-plus.

“First, the cure for low oil prices is low oil prices, and next year we are forecasting a meaningful decline in U.S. production (and in other short-cycle producing countries as well),” Molchanov and Freeman wrote. “Second, the Saudi-Russia price war is largely political, and also self-destructive, so we expect it to be short-lived. Third, as hard as it may be to believe now, Covid’s demand impact will also subside over time.”

Moody’s also lowered its outlook for gross domestic product (GDP) growth for this year to 0.9% from 1% for Latin America’s second largest economy. Investment bank Barclay’s said on Friday it sees an economic contraction of 2% in Mexico in 2020. Last year, Mexican GDP shrank by 0.1%, the first annual contraction in a decade.

Lopez Obrador on Monday blamed the economic woes the country is facing on endemic corruption and “dishonesty.” He claimed lower oil prices will help the overall wellbeing of Mexicans.

“We can meet the challenge of the lower price of oil because it means the price of gasoline falls and we import 70% of our gasoline in this country. This will help our economy.”

“If we have problems with the depreciation of the currency, if it increases our debt, we will make an adjustment and tighten our belts,” he said. “But this won’t hurt our social programs.”

The price crash however has all but erased any hope of profitability at Pemex’s so-called priority onshore and shallow water fields, Mexico City-based analyst Arturo Carranza told NGI’s Mexico GPI, citing that costs at these fields are higher than at Pemex’s legacy producing fields.

North American E&P companies have announced vast spending cuts in the wake of falling prices. This includes Talos Energy Inc., which is targeting a final investment decision this year at its Zama oil discovery offshore Mexico.