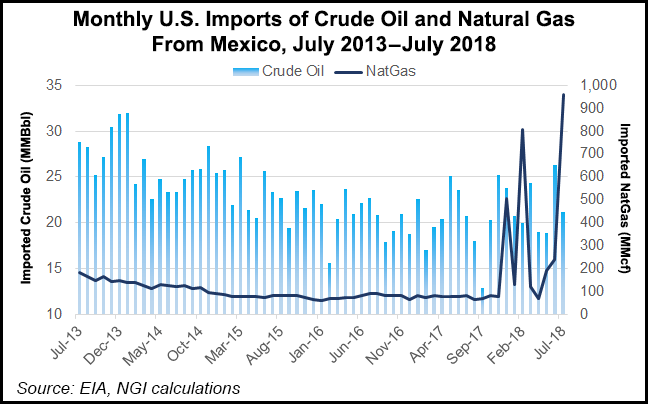 With the clock running out on a U.S.-imposed deadline of midnight for Canada to join a pact already reached by the US and Mexico, the three countries agreed upon a final version of the United States-Mexico-Canada-Agreement (USMCA). The deal, if approved by the countries’ respective legislatures, will replace the 1994 North American Free Trade Agreement (NAFTA).

Chapter 8 of the USMCA stipulates recognition by the United States and Canada that, “Mexico reserves its sovereign right to reform its Constitution and its domestic legislation,” and that, “The Mexican State has the direct, inalienable and imprescriptible ownership” of all onshore and offshore hydrocarbon deposits in Mexican territory.

The language tracks closely with the rhetoric of leftist President-elect Andrés Manuel López Obrador, popularly known by his initials AMLO, both before and after his July 1 electoral victory.

“I think that what Lopez Obrador was particularly concerned about was having language enshrined in an international agreement, which in Mexico has … almost equal footing with the constitution,” the Woodrow Wilson Center’s Duncan Wood told NGI’s Mexico GPI.

López Obrador’s energy advisers have made clear that his administration will, at a minimum, seek to change the reform’s secondary laws, in order to give Pemex more autonomy in choosing its joint-venture partners for upstream projects. Peña Nieto’s reform requires partners to be selected through transparent bidding processes conducted by national hydrocarbons commission CNH.

The president-elect’s anti-reform rhetoric, combined with the decisive legislative majorities won at the state and federal levels by his Morena coalition, have led to fears that he could seek to change the constitution and undo the reform entirely. López Obrador’s pick for hydrocarbons undersecretary, Alberto Montoya, vociferously advocated for this measure as recently as April.

However, both the president-elect and Fluvio Ruíz Alarcón, who is a former Pemex board member and one of the architects of López Obrador’s energy proposals, have signaled that they intend to modify, not overturn the reform.

The USMCA also maintained, for a select few industries including oil and gas, the investor-state dispute settlement (ISDS) mechanism from Chapter 11 of NAFTA.

Under Chapter 11, “each NAFTA Party must accord investors from the other NAFTA Parties national (i.e. non-discriminatory) treatment and may not expropriate investments of those investors except in accordance with international law,” according to the U.S. State Department.

Under the mechanism, an investor from one NAFTA country may sue the government of another NAFTA country for violating the Chapter 11 provisions and seek arbitration by an impartial tribunal, thereby sidestepping the NAFTA countries’ respective court systems.

Chapter 11 has generated opposition from within NAFTA governments as well as from environmental groups, on grounds that it strips member countries of their sovereignty in disputes with companies.

The oil industry, however, lobbied “from day one” of the NAFTA renegotiations to keep the Chapter 11 protections, Wood said. “They saw that as being of fundamental importance, given that they had already committed many tens of billions of dollars to Mexico.”

Wood said that while he does not expect the USMCA to face strong opposition from legislators in Mexico or Canada, a Democrat-controlled U.S. House of Representatives after Nov. 4 could cause ratification to be delayed.

However, he said, “My suspicion is that it’s not going to make that much difference, simply because all of the vested interests … in North America are going to come together to push whoever is in control of Congress to approve this deal.”

An uptick in North American oil and natural gas activity, brought about because of the tight global commodity markets, has “bolstered demand” for Liberty Oilfield Services Inc.’s completions services and set it up for a strong 2022, CEO Chris Wright said Wednesday. With heightened demand to drill, more customers today also are looking for “modern,…