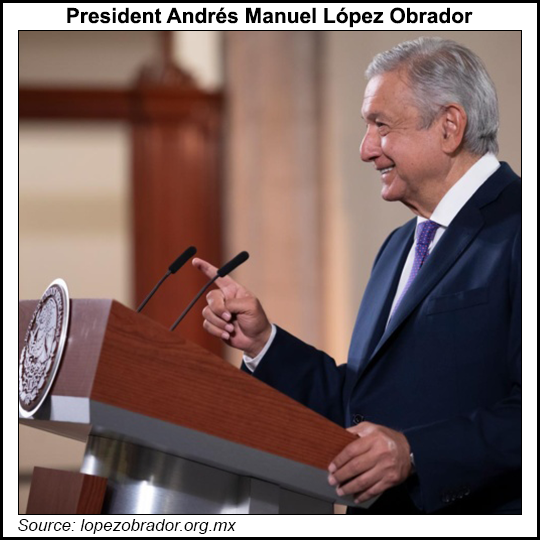 During his daily morning press briefing, López Obrador said a possible counter-reform would reaffirm the state’s predominance in the energy sector, and put a stop to “constantly rising” fuel and electricity prices.

He also said he is proposing that power plants operated by state-owned Comisión Federal de Electricidad (CFE) receive priority in the dispatch order over private sector-owned plants, which he said are only seeking profit as opposed to benefitting the population.

The president dismissed concerns that this approach would scare investors away from the country.

“There are very clear rules and foreign investors are constantly seeking me out to inform me that they will bring more capital to Mexico and they are welcome, as long as there are no abuses, no plundering, no unfair contracts, they pay taxes, and respect the sovereignty of our country,” he said.

On Thursday, however, a bipartisan group of U.S. legislators suggested otherwise in a letter to president Trump.

“We write today to bring to your attention concerning actions by the government of Mexico that threaten U.S. energy companies’ investment and market access and undermine the spirit of the United States-Mexico-Canada Agreement (USMCA),” lawmakers said in the letter dated Thursday. They cited Mexico as the leading destination for U.S. petroleum product exports and a growing destination for natural gas exports.

They added, “These anecdotal experiences have recently been given additional credence” by a leaked memorandum from the president directing energy regulators to prioritize the interests of Pemex and CFE.

They also cited that members of López Obrador’s Morena coalition, which controls both chambers of congress, have introduced legislation “that would roll back the historic 2014 energy reform and seek to relinquish all contracts currently in force.

“Therefore, we are deeply concerned that these actions demonstrate a pattern of obstruction and urge you to find a resolution with the government of Mexico to keep the current market conditions that the energy reform regulatory framework provides, along with certainty and fairness for U.S. companies operating and competing in Mexico.”

The legislators said U.S. firms have invested billions of dollars in energy infrastructure as a result of Peña Nieto’s reforms, adding, “These investments resulted in positive factors, such as infrastructure development and employment generation on both sides of the border.”

López Obrador said Monday that he planned to “rescue” Pemex and CFE without expropriation or nationalization.

However, he was apparently unmoved by the letter from U.S. legislators, calling the accusations of preferential treatment for Pemex and CFE a “stamp of honor.”

On Monday and over the weekend, López Obrador also expressed support for increased coal-fired power generation, which he said has been “under-utilized” in favor of private sector generators that “sell electricity at elevated prices” to CFE.

He accused proponents of renewable energy in particular of deceiving the Mexican public about the need to add more clean energy capacity, and lamented that wind farms receive dispatch priority over thermal and hydroelectric plants owned by CFE.