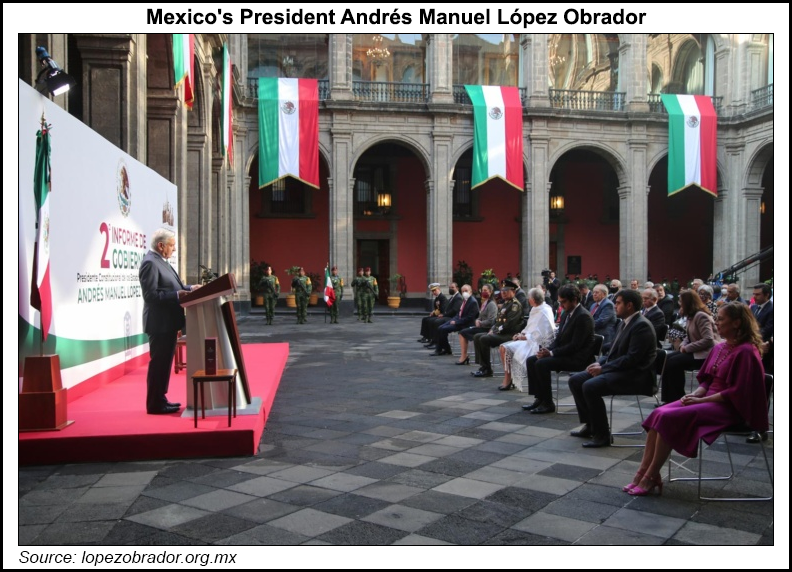 “With the backing of workers and technicians at Pemex and Comisión Federal de Electricidad we are rescuing these public companies, making them more efficient, ridding them of corruption and complying with our promise of not increasing prices of gasoline, diesel, gas and power,” he said.

The speech in the patio of the national palace started with one minute of silence to honor coronavirus victims. It took place in front of a spartan, socially distanced audience and was completed in under an hour.

Unlike many previous addresses to the nation, including last year’s first Informe de Gobierno, López Obrador, often referred to by his nickname AMLO, didn’t elaborate further on energy policy.

He reiterated his government’s opposition to hydraulic fracturing (fracking), which is seen by many as key to halting years of declines in oil and gas production.

López Obrador instead focused his speech on the coronavirus and its economic fallout, and in particular on government efforts to battle corruption, which he called the biggest problem facing Mexico.

“The time of being robbed by those from above is over,” he said, arguing that he had removed luxury from the government and through austerity had saved Mexicans billions of dollars.

Part of the president’s corruption fight revolves around the state oil company. In July, former Pemex director general Emilio Lozoya was extradited from Spain and returned to Mexico to face corruption charges. López Obrador claims the landmark energy reform of 2014 was forced through under corrupt means and Lozoya’s testimony will prove this.

Critics suggest that his focus on corruption is a way to shift the spotlight away from his mismanagement of the coronavirus and the economy. Indeed, the address served to underline how much has changed in the year since the president delivered his first speech.

Last year, López Obrador in his speech celebrated the renegotiated terms on natural gas pipeline contracts. It was a dispute that had dragged on for most of the previous summer and came to a conclusion through discussion. It seemed to bode well for a better relationship between the government and the private sector. He then thanked private companies and business leaders for their cooperation in the process.

This year Mexico is mired in a severe recession amid the pandemic, and the president’s tone around private enterprise has soured.

As of Tuesday, Mexico had 64,414 coronavirus deaths, the fourth worst figure in the world behind India, Brazil and the United States. Mexico’s gross domestic product contracted an annualized 53.2% in 2Q2020, its largest quarterly drop on record, according to the Federal Reserve Bank of Dallas. The country had entered into recession even before the coronavirus.

Also absent from his speech was the usual congratulations for turning around oil production at state behemoth Pemex. Last month, the heavily indebted Pemex, wracked by mounting financial losses, reported its lowest oil production figures since 1979.

The president said Mexico was facing a dual sanitary and economic crisis, but the worst was in the past. The country began to grow again with 93,000 jobs gained in August. In addition, he said a Mexico-backed vaccine would be ready in November, with universal and free vaccinations to begin in early 2021.

He highlighted his good relationship with President Trump, and said the 10% annual increase in remittances from Mexicans living in the United States this year were important to economic recovery.

López Obrador has seen his approval rating fall steadily since coming to power in December 2018, but he still maintains considerable support by Latin American standards.

[Understand how the Mexican natural gas market has evolved over time with on-the-ground insight from active participants. Get the analysis of NGI’s most-recent market survey in Mexico.]

According to a poll conducted by Parametria in late August, López Obrador has an approval rating of 65%. Another recent poll by daily Reforma showed the president’s approval slightly lower at 56% in August.