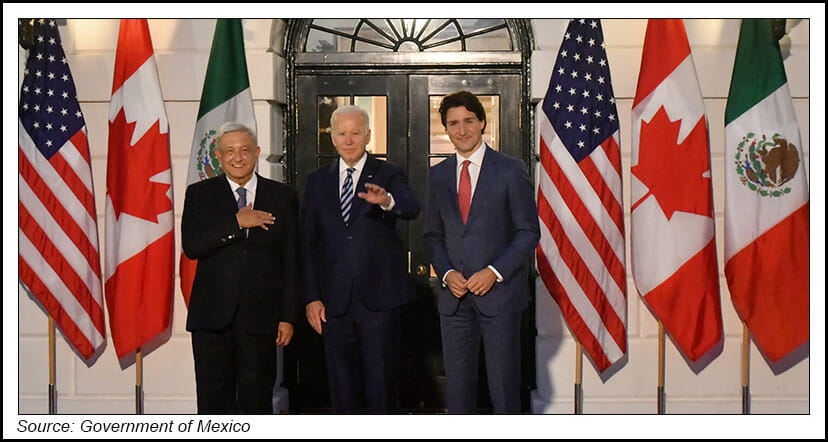 The strategy will aim “to reduce methane emissions from all sectors, especially oil and gas,” the White House said. “We will also focus on reducing black carbon from diesel vehicles and engines, flaring, wood-burning appliances, and shipping.”

Biden and Trudeau “reiterated their pledge to reach net-zero greenhouse gas emissions by 2050, to enhance 2030 greenhouse gas reduction targets, and they affirmed the Global Methane Pledge,” the White House said.

More than 100 countries representing slightly under half of global anthropogenic methane emissions  have signed the pledge. Signatories commit to a collective goal of reducing global methane emissions by at least 30% from 2020 levels by 2030 “and moving toward using best available inventory methodologies to quantify methane emissions, with a particular focus on high emission sources,” according to a joint statement from the participating countries.

The summit follows the announcement of a proposed Clean Air Act rule by the Environmental Protection Agency to sharply curb methane emissions from oil and gas operations.

Canada’s government in October announced a goal to cut oil and gas methane emissions by 75% versus 2012 levels by 2030.

Methane emissions and climate change in general have been less of a priority for López Obrador. He has instead sought to shore up production of oil and refined products by state-owned oil company Petróleos Mexicanos, aka Pemex, which has drawn criticism for being a laggard on natural gas flaring and environmental, social and governance issues in general.

A study this year led by the Environmental Defense Fund found that natural gas processing facilities owned by Pemex were emitting methane pollution at 10 times the rate being reported by the government.

Talanza Energy Consulting warned last year that Mexico must strengthen its methane regulations in order to achieve its emissions targets.

Mexico did, however, sign onto the Global Methane Pledge.

In addition to tackling methane emissions, Biden and Trudeau “plan to expand clean electricity, grow zero-emissions vehicles and charging infrastructure, and accelerate carbon sequestration,” the White House said. “They will work to reduce oil and gas sector emissions and end new direct public support for unabated fossil fuels internationally by the end of 2022.”

Biden and López Obrador, meanwhile, “discussed their visions to tackle the climate crisis and the energy future of North America,” the White House said. “Both noted their commitment to work closely together to accelerate North American deployment of renewable energy, including catalyzing finance and technology in service of renewable energy.”

López Obrador has drawn criticism from environmentalists and the business community for energy policies aimed at strengthening Pemex and state power utility Comisión Federal de Electricidad (CFE). He is currently promoting a constitutional reform that would give priority to CFE plants in electricity dispatch and end power purchase agreements between non-state actors.

Clean energy groups have denounced the proposal as an attack on private sector wind, solar and natural gas generation.

The trilateral summit coincided with passage of the House reconciliation bill on Friday, the $2 trillion flagship proposal of Biden’s Build Back Better agenda. The bill, which will now head to the Senate, includes a proposed tax on methane leaks from oil and gas operations and infrastructure that is opposed by the industry.