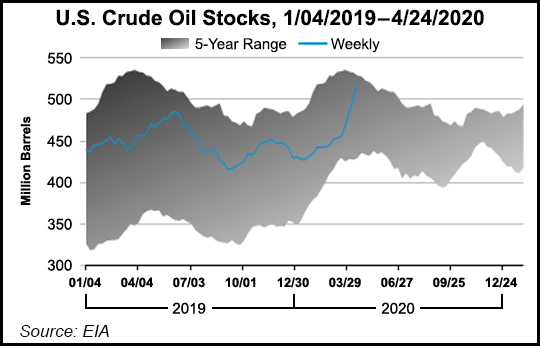 The completion of the MIEC in Ingleside and Taft terminal nearby, brings total storage capacity to about 12 million bbl, Moda said.

The new storage comes as oil oversupply and the demand impacts of the coronavirus have led to a severe lack of storage capacity in the Lower 48. As a result, earlier this month, the West Texas Intermediate (WTI) crude futures contract for the upcoming month plunged into negative territory for the first time ever.

Construction has also begun at MIEC on an expansion phase of an additional 3.5 million bbl of crude storage. Moda expects to begin placing storage tanks from this expansion into service later this year, which would give it total storage capacity of more than 15.5 million bbl.

Moda, a liquids terminal and logistics company, also has obtained permits to construct additional crude capacity at both MIEC and the Taft terminal and is discussing further expansions with customers.

MIEC has direct connectivity to about 2.5 million b/d of Permian Basin and Eagle Ford Shale crude supply from four long-haul pipelines. Two of these pipelines, the Gray Oak Pipeline and the Epic Crude Oil Pipeline, recently commenced full service. In addition, MIEC would be able to receive deliveries from Harvest Midstream’s Ingleside Pipeline, which is under construction and iexpected to be placed into service later this year.