Populous California, where officials have been pushing to move the energy mix away from natural gas and toward renewables, imported by far the most electricity of any state in the Lower 48 in 2019. 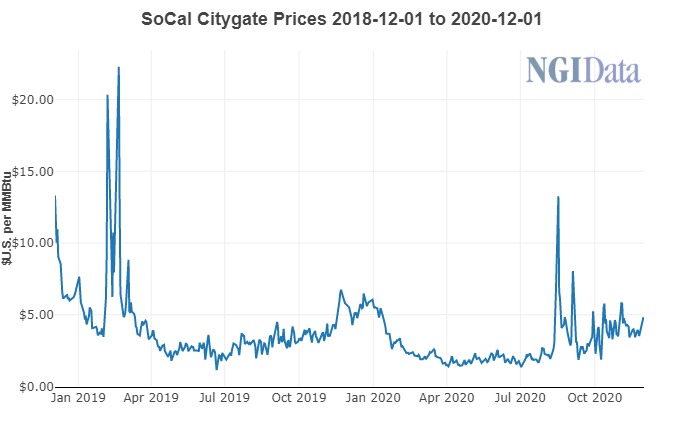 “California utilities partly own and import power from several power plants in Arizona and Utah,” EIA researchers said. “In addition, California’s electricity imports include hydroelectric power from the Pacific Northwest, largely across high-voltage transmission lines running from Oregon to the Los Angeles area.”

During an August heat storm this past summer, California’s thirst for electricity approached the limits of its supply, with the state moving to implement rotating power outages to conserve resources.

For followers of the region’s natural gas market, California has become closely associated with pipeline disruptions and price spikes in recent years. Prices at SoCal Citygate, reflecting demand in the supply-constrained Southern California region, shot up to as high as $22.285/MMBtu in 2019, Daily GPI historical data show.

This comes as California cities have been moving to ban natural gas in new residential and commercial buildings.

Meanwhile, despite ranking in the top 10 among states for electricity generation, Ohio was the next largest electricity importer, with net imports of around 38 million MWh last year, according to EIA data.

Pennsylvania, where 43% of in-state power generation came from natural gas, was the largest net electricity exporter in 2019. Pennsylvania exported 70.5 million MWh last year, or 24% of its total supply, according to EIA.