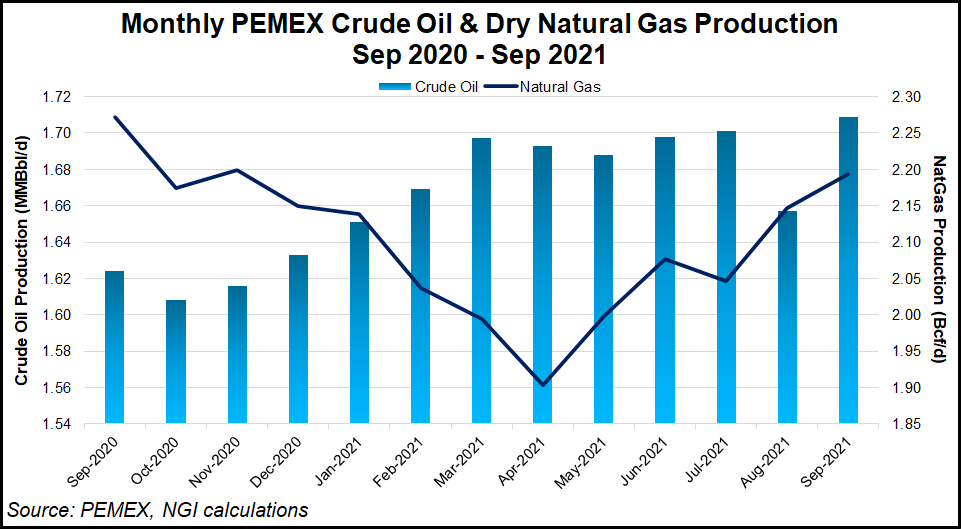 Reinaldo Wence of downstream unit Pemex Transformación Industrial said “we need all the natural gas we could get… especially with the weather turning cold.” He was referencing the onset of the Northern Hemisphere winter and the global natural gas crunch.

Wences said that upstream arm Pemex Exploración y Producción (PEP) was working to add an additional 1 Bcf/d in the upcoming years, adding that the Mexico market needed about 10 Bcf/d of natural gas to cover industrial and economic needs.

Over 60% of this figure is today made of imports via pipeline from the United States. “We still have plans to import,” Wences said.

Mexico has struggled to improve natural gas supply over the last decade even as its power grid and industry have increased their use of the fuel.

Prior to the call, Pemex CEO Octavio Romero Oropeza said the company also aimed to reduce flaring, a longstanding problem at the state oil firm. In the third quarter, Pemex flared off 13% of its production, or 606 MMcf/d. Romero said he aimed to get that number down to 2% next year, without providing details.

To that end, executives said a “risk strategy plan” around environmental, social and governance (ESG) issues was being developed for the 2022-2040 period. Amid rising alarm over its environmental record, Pemex began including an ESG component to its earnings presentations for the first time last quarter.

Natural gas production in the third quarter was up 7 MMcf/d compared to the same period last year to 3.690 Bcf/d. Associated gas accounted for 73% of the total.

Oil production was also up during the period. Pemex produced 1.761 million b/d in the quarter, up by 84,000 b/d. The so-called “priority fields” were producing 280,000 b/d as of the end of September, executives said. These new onshore fields were led by Quesqui, which is also a leading natural gas asset.

Oil fetched an average $66.90/bbl in the quarter, about double the Mexico price in the same period in 2020. Pemex sees production hitting 2.063 million b/d at the end of this administration.

Capital expenditures through September were just over 100 billion pesos, or $4.8 billion, compared to 122 billion pesos in full-year 2020, executives said.

Despite the high price environment, Pemex reported a loss of 77.2 billion pesos ($3.7 billion) for the quarter, compared to a profit of 1.4 billion pesos in the same period last year. Executives attributed the result to its onerous tax burden, along with foreign exchange losses.

The tax burden underscores the symbiotic relationship between Pemex and the Mexican government. Executives said during the call that the company was contributing about double the amount it did last year to the federal budget, and that Pemex was the single biggest contributor to government revenue in Mexico.

But the help also goes the other way. Ever since President Andrés Manuel López Obrador came to power at the end of 2018, he has pledged to do all he can to “strengthen Pemex.” As the latest wrinkle in this strategy, Romero said before the earnings call that the Finance Ministry (Hacienda) would now assume Pemex’s debt amortization payments through 2024.

“We have a great collaboration with the new team in [the ministry],” CFO Alberto Velazquez said on the call. “We are working together to have a coordinated debt strategy.” He said that “we have received really strong support from the government” to fulfill debt and amortization schedules.