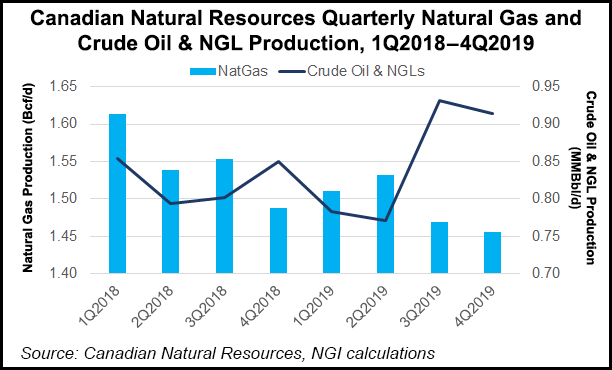 “Essentially, Canada’s oil and gas sector has taken what was branded as high intensity oil in 2009 and made it what I would call the premium oil on the world stage.”

GHG intensity on a well-to-combustion basis of the independent’s production is now below the global average, Laut said.

Since 2012, Canadian Natural has reduced overall corporate emissions intensity by 29%, slashed emissions intensity at its Horizon Oilsands mine by 37%, and lowered its primary heavy oil intensity by 78%, Laut said. Through these efforts the company has achieved the equivalent of taking more than two million cars, or about 5% of Canada’s entire vehicle fleet, off the road.

Canadian Natural’s aspirational goal is to achieve net zero emissions from its oilsands activity, Laut said. The company aims to reduce oilsands GHG emissions intensity by 25% from a 2016 baseline by 2025 and achieve a 20% reduction in methane emissions from its North America E&P operations by 2025 from a 2016 baseline. In addition, the strategy is to reduce water intensity in the oilsands operations by 50% by 2022 from a 2012 baseline, and reduce oilsands mining fresh river water intensity by 30% by 2022 from a 2012 baseline.

Oilsands output rose 56% to reach a record 167,942 b/d in 2019, driven by the Jackfish, Kirby North and Primrose assets acquired from Devon, and “reflecting the successful execution of the company’s curtailment optimization strategy.”

Production of synthetic crude from oilsands mining and upgrading assets averaged 395,133 b/d in 2019, down 7% y/y, “reflecting the proactive piping replacement in one of the hydrogen units at Horizon, together with the unplanned maintenance at the non-operated Scotford Upgrader and at Horizon in the first half of the year,” management said.

The company, which reports in Canadian dollars, cited “the volatile state of the current crude oil price environment,” in trimming 2020 oilsands capital expenditures by about $100 million. Total capex is set at $3.95 billion in 2020, off slightly from $3.9 billion in 2019.

As a result of reductions in the corporate tax rate enacted by the Alberta government, and of elimination of curtailment for some conventional drilling in the province, Canadian Natural has increased 2020 exploration and production (E&P) capex by about $250 million from 2019, targeting 60 additional drilling locations across the province.

Canadian Natural reported record free cash flow (FCF) of $4.62 billion for 2019. As part of its gas marketing strategy, the company attained about $115 of additional margin in 2019 by diversifying gas sales points.