Consol Energy Inc. produced 235.7 Bcfe in 2014, 37% more than the 172.4 Bcfe it produced the prior-year, as its exploration and production (E&P) division drove profits in the Marcellus Shale and its operations continued to shift from coal to natural gas. 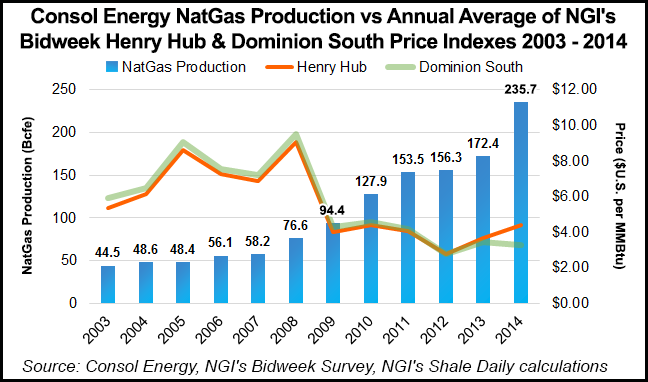 It was late in 2013 when Consol announced it would sell five coal mines in West Virginia for $3.5 billion, laying out a strategy that would find the company more intently focused on its natural gas assets in the Appalachian Basin and positioning it for transformation throughout 2014 (see Shale Daily, Oct. 28, 2013).

The company’s net income declined from $659 million ($2.87/share) in 2013 to $163 million (70 cents) last year, but that wasn’t entirely unexpected, as much of the decline resulted from discontinued coal operations and non-core gas assets. As the company aims for more E&P growth and plans to get lean by cutting costs, it’s already announced its intent to sell $1 billion of assets by 2019, a schedule, it said Friday, was on track.

“If you look at the [fourth quarter], Marcellus production volumes were 88% higher than the 2013 fourth quarter,” said CEO Nicholas Deluliis. “The growth has been remarkable to say the least, and as the Marcellus becomes a bigger part of the production mix, it has a lot of implications for the rest of the E&P division, due to lower costs, which in turn contribute to higher rates of return.”

Deluliis said the company is mindful of the current commodities environment and said Consol would continue to monitor weak oil and natural gas prices. Its spending will remain mostly flat in 2015, with a $1 billion budget set for its E&P division and down slightly from the $1.3 billion it spent last year.

“When you put on top of that the fact that the majority of our acreage is held by production and that we’ve got the high net revenue interest, especially compared to peers across the industry,” Deluliis continued, “you can see why even in a low commodity price environment, we’re able to make good returns and good profits.”

“Even though our realizations have declined, our unit costs have declined as well to offset and keep our margins flat,” said CFO David Khani. “We continue to make progress on cost efficiencies as we increase stages per day, days moving rigs — we’re making progress.”

The company also plans to rely on cost reductions this year and 30% production growth to keep its balance sheet intact during the current commodities downturn. Consol said a fatal accident at an unspecified midstream company last quarter prompted it to review the operators safety standards and forced it to shut in 2.7 Bcfe, which also dented revenues last quarter.

Consol couldn’t give a well count for this year, saying that would depend on the plans it has with its joint venture partners in the Utica and Marcellus and how the price environment unfolds. It did announce, however, plans, to test the Utica Shale in West Virginia and Pennsylvania, which could lead to larger production gains from that formation towards the end of the year and heading into 2016.

The Marcellus Shale accounted for the largest share of production last year at 111.7 Bcfe, but the Utica Shale continues to contribute as well, where the company reported producing 7.1 Bcfe in 4Q2014 — well above the 0.5 Bcfe it produced there at the same time in 2013.

A plan to split the company’s coal division from its E&P division, with a master limited partnership for its thermal coal assets and an initial public offering for its metallurgical assets is also on track for mid-2015, the company said Friday (see Shale Daily, Oct. 28, 2014).