Affiliates of American Energy Partners LP (AELP) are picking up acreage in Texas, Ohio and West Virginia in a trio of deals worth a combined $4.25 billion, marking American Energy’s entry into the Permian Basin and the southern Marcellus Shale, and its continued expansion in the Utica Shale. 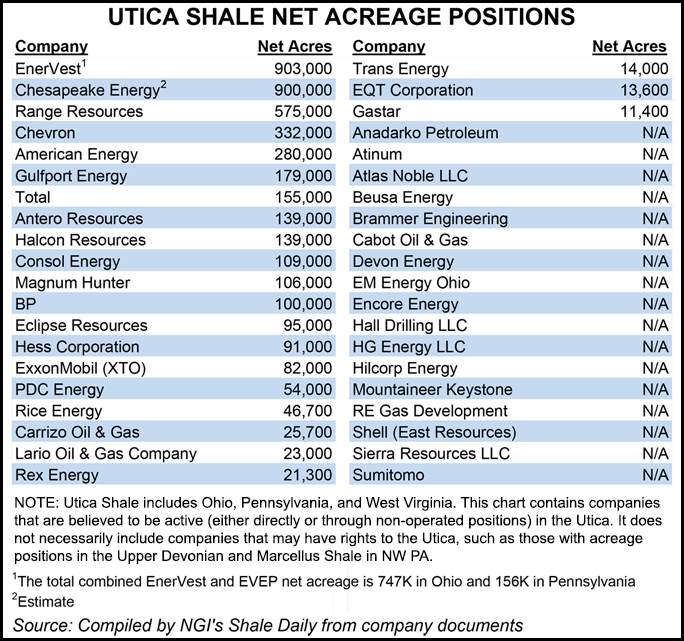 American Energy-Permian Basin LLC (AEPB) agreed to acquire 63,000 net acres in the southern Permian Basin, primarily in Reagan and Irion counties, TX, from affiliates of Denver-based Enduring Resources LLC for $2.5 billion. At closing, the properties are expected to have net production of 16,000 boe/d. The deal marks AEPB’s entry into the Permian, where it plans to acquire more acreage over time.

Enduring has been running four rigs to develop the Permian acreage and AEPB plans to increase operated drilling activity to six to eight rigs by year-end 2015. AEPB plans to drill up to 2,500 gross wells and 1,750 net wells on the acreage over the next decade.

The Utica and Marcellus deals are worth a combined $1.75 billion, and both are expected to close within 60 days. The sellers are currently using two rigs to develop the acreage, and AEU and AEM said they plan to increase operated drilling activity to four to six rigs by year-end.

The Utica acquisition marks AEU’s seventh major acquisition in the southern Utica Shale play and boosts its leasehold there to 280,000 net acres, the largest leasehold position in the play (see Shale Daily, Feb. 20). AEU has invested more than $3.5 billion in the Utica to date and said it plans to drill 2,600 gross wells and 1,600 net wells on its acreage in the years ahead.

The Marcellus acquisition marks AEM’s entry into the southern Marcellus Shale and establishes a strong foundation from which it plans to build a more significant leasehold position in the area. AEM plans to drill 410 gross wells and 355 net wells on its acreage in the years ahead.

During the past nine months, the AELP platform has raised committed equity and debt capital of about $10 billion to fund the development of five play- or strategy-specific companies: AEPB, AEU, AEM, as well as American Energy-Woodford LLC and American Energy-NonOp LLC. The lead equity investor is The Energy & Minerals Group, with additional equity provided by First Reserve Corp., AEPB management and others.