American Eagle Energy Corp., a Littleton, CO-based independent with a focus on the Spyglass area of the Bakken Shale in North Dakota’s northwestern Divide County, on Friday opened a voluntary Chapter 11 proceeding in the U.S. Bankruptcy Court for the District of Colorado in Denver. 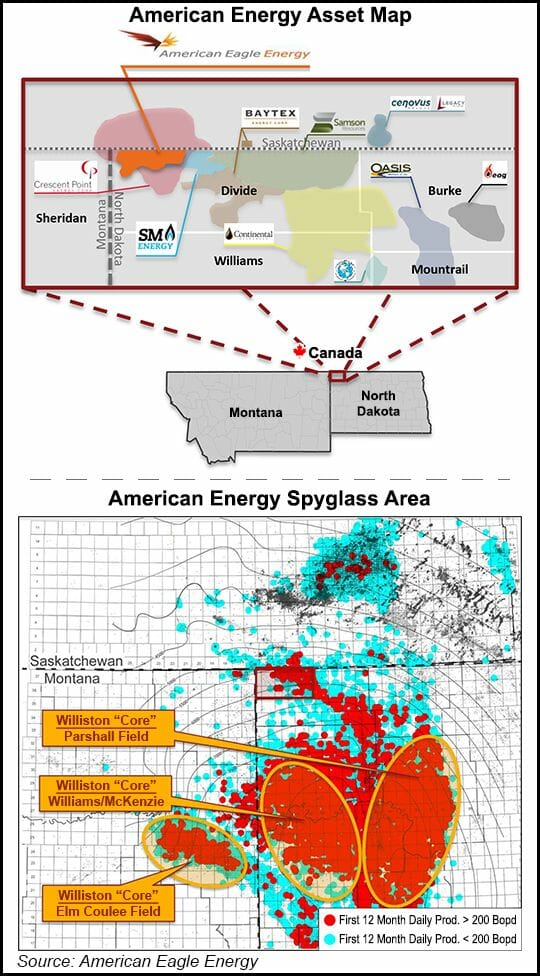 The company, which replaced its chief financial officer last week, listed $215 million in debts in its petition to the bankruptcy court, following a missed interest payment earlier this year on $175 million in debt. American Eagle secured the debt last August, shortly before the bottom dropped out of global oil prices.

The Bakken producer stopped drilling last November and emphasized a focus on capital discipline and maintaining liquidity. “Given current crude oil prices, American Eagle has suspended its 2015 operated drilling budget and does not anticipate resuming drilling operations until crude oil prices improve,” the company said at the time.

Back then, company officials said they planned to conduct completion operations in the first quarter of 2015 on two gross (1.9 net) wells (Byron 4-4 and Shelley Lynn 4-4N) that were drilled during 4Q2014. “These operations are estimated to require a capital expenditure of approximately $4.5 million in 2015.” The company did not respond to a request for comment.

In its bankruptcy filing, American Eagle said it will continue to operate its business as debtors-in-possession under the bankruptcy court’s jurisdiction. It has asked the court for authority to continue paying employees and providing them benefits.

CEO Brad Colby said the Chapter 11 process will give the company the “flexibility” it needs “to pursue viable options for asset sales or other alternatives with the goal of maximizing the value of the enterprise for our stakeholders.”

American Eagle holds about 29,600 net acres in the Spyglass area of the Williston Basin, with 10,400 net operated acres on 20 drill spacing units, referred to as its “proved” area. The company holds an average working interest of 51%.

The company describes Spyglass as a “large oil resources development play” targeting both the Bakken and Three Forks formation in Divide County. American Eagle takes credit for the first horizontal Bakken discovery well to be drilled in the Hoffer Field by TriAxon in 2009, and that led to a second horizontal discovery well at Oungre, ND.

A hotline has been created by the company and documents and information about the Chapter 11 filing are available on the court website, www.cob.uscourts.gov.The telephone hotline and email address are: (212) 389-8910, and amzg@canaccordgenuity.com.