In the wake of the political crisis in Ukraine, the ambassadors of four central European countries to the United States are urging Congress to expedite liquefied natural gas (LNG) exports to its allies on the continent, in hopes of reducing their dependence on Russia for natural gas. 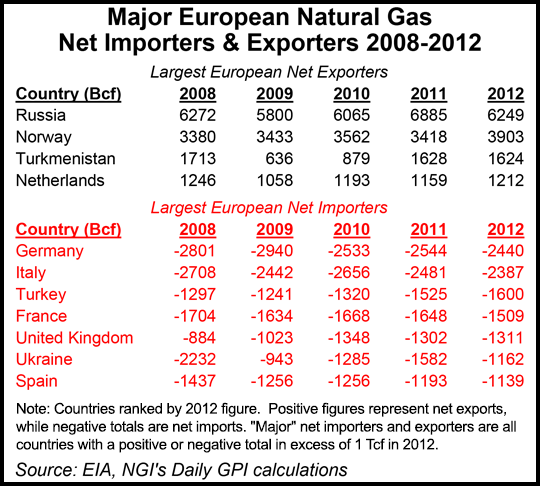 In a letter Friday to House Speaker John Boehner (R-OH), the ambassadors from the Czech Republic, Hungary, Slovakia and Poland — also known as the Visegrad Group — said Russia’s invasion of the Crimean Peninsula “brings back memories of the Cold War from which all of our countries suffered terribly,” and said the U.S. “has a window of opportunity to act” to provide energy security to Central and Eastern Europe.

“With the current shale gas revolution in the United States, American companies are seeking to export gas, including to Europe,” the ambassadors said. “But the existing bureaucratic hurdles for the approval of the export licenses to non-FTA [free trade agreement] countries like the Visegrad countries are a major hurdle.

“The presence of U.S. natural gas would be much welcome in Central and Eastern Europe, and Congressional action to expedite LNG exports to America’s allies would come at a critically important time for the region.” The ambassadors apparently are ignorant of the fact that the U.S. currently does not have the capability of manufacturing liquefied natural gas (LNG) that can be exported across the ocean, and any relief from the U.S. would be many years away.

The ambassadors said that “despite significant diversification efforts” their countries still were dependent on a single supplier — Russia — for natural gas imports between 70-100% of the time. They added that gas crises in 2006 and 2009 “have shown that the region is more vulnerable to energy security risks than most of the European countries.”

According to the ambassadors, reverse flow capabilities could be enlarged further and a potential connection built between Slovakia and Ukraine. Poland also shares a border with Ukraine.

“As we know, after two months of decreased gas price, on March 4 Russia again unilaterally increased the price of gas supplied to Ukraine,” they said, adding that the European Union was ready to assist Ukraine with securing energy supplies.

In a statement, Boehner said, “I hope President Obama will heed this call from our allies to use his ‘pen and phone’ to direct the Secretary of Energy to immediately approve pending natural gas export requests and do everything possible to use American energy to reduce the dependency on Russia for our friends in Europe and around the globe.”

Only one project, Cheniere Energy Inc.’s Sabine Pass facility, has received both authorization from the Department of Energy (DOE) to export LNG to non-FTA countries, as well as approval from the Federal Energy Regulatory Commission for terminal construction (see Daily GPI, July 30, 2012). It is under construction and will not be completed until sometime in 2015. To date, the DOE has granted six conditional non-FTA export approvals (see Daily GPI, Feb. 11). All of the advanced proposals have contracted most of their gas to Asian buyers at higher prices than generally prevail in Europe.