Houston-based Altus Midstream Co., which owns most of the assets servicing Apache Corp.’s Alpine High in the Permian Basin, has exercised an option to acquire a 26.7% stake in the 2 Bcf/d Permian Highway Pipeline (PHP), which when completed could deliver natural gas from West Texas to the Gulf Coast. 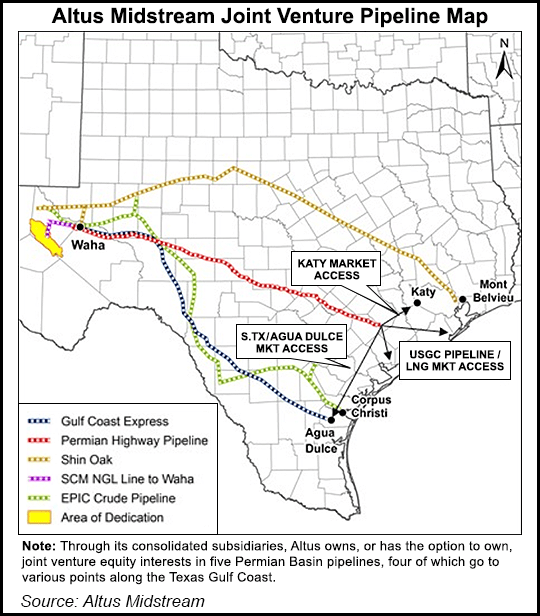 PHP would move gas through a 430-mile pipeline from Waha to Katy, west of Houston, with connections to the Gulf Coast and Mexico markets.

“We are very excited to participate in the Permian Highway Pipeline,” Altus Midstream CEO Clay Bretches said on Thursday. “This is a high-quality project supported by take-or-pay contracts with creditworthy counterparties.”

Shippers already committed to the project besides EagleClaw include Apache and XTO Energy Inc., a subsidiary of ExxonMobil Corp.

Net to the Altus ownership interest, the exercise price of the option is about $161 million, Bretchese said, which includes the proportional share of capital spent by the JV partners.

“Exercising the PHP option in advance of the September deadline minimizes this financing charge, which reduces our capital requirements by approximately $8 million relative to what was included in our 2019 guidance,” he noted.

The ownership split on the estimated $2.1 billion long-haul pipeline now is 26.7% each by Altus Midstream Processing, KMTP and EagleClaw, with the remaining 20% owned by an anchor shipper affiliate.

Altus, a pure-play, Permian-to-Gulf Coast midstream C-corporation, through its consolidated subsidiaries owns most of the gas gathering, processing and transportation assets servicing Apache’s production in the Alpine High in the Delaware sub-basin. Altus also owns or has the option to own JV equity interests in five Permian pipelines, four of which go to various points along the Texas coast.