Alliance Pipeline set out Thursday to stay full by catering to demand for carriage of liquids-rich natural gas, shortened transportation contracts, and the addition of a trading floor on its 3,719-kilometer (2,311-mile) route to Chicago from northern British Columbia (BC). 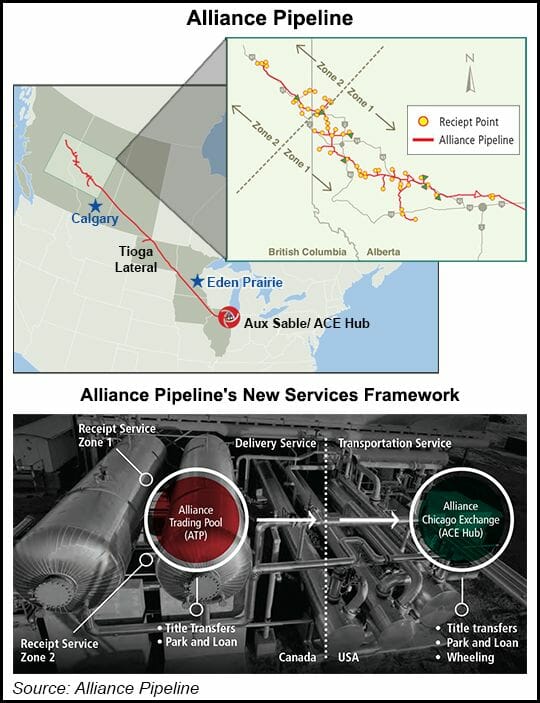 Approval of the new services and tolls is sought before the expiry date of the old delivery contracts by an application to the National Energy Board (NEB). The package emerged from more than two years of consultations with gas shippers, Kutryk said. He described the resulting approach as “extremely rich-gas producer-focused.” Changes include a departure from industry-standard specifications for flows put into the system that will enable increased liquids shipments and reduced costs of gas-field processing.

The critical change is in hydrocarbon dew point (HCDP) or the temperature where liquids occurring as vapor in natural gas condense. Alliance is raising its HCDP to -5 degrees Fahrenheit from the industry-standard -10 degrees Fahrenheit. The switch will allow carriage of “ultra-rich” or “dense” gas and will pare costs of compressing shipments to achieve the required temperature.

Allowing warmer flows will also let Alliance offer a “blended gas” delivery service, Kutryk said. The temperature requirement will be an average computed in a way that allows mixtures of lean and liquids-steeped production. The new service and toll program also allows more than one producer to be involved in assembling blended batches or streams. “We’ll be a match-maker,” Kutryk said.

He predicted that the effect will be akin to airline seat sales, where empty spots are sold late to control extra costs for flyers that book early and over the long run limit added expense that operating under-capacity eventually imposes on all travelers.

Although Alliance will continue to offer decade-long transportation contracts, the new service package offers shippers an array of booking lengths to match the faster gas trading that has emerged since the pipeline began operating in 2000.

A “fundamental” change will turn the Canadian half of the line into a “notional” gas exchange called the Alliance Transfer Pool. Suppliers and buyers will do transactions at geographical points of their choosing inside Canada, at agreed prices and arrangements for delivery of the gas to the spots where shipments change hands.

Alliance turned out to fit the new gas order by being designed and built to carry dense or liquids-rich gas at extra high pressure from its birth, with features such as pipe walls 20-50% thicker than the industry standard.

By a stroke of geological luck, the northeastern BC region around Fort St. John where Alliance and its network of inlet lines collects production is in the heart of the liquids-rich sweet spot in a vast shale gas deposit known as the Montney.

“It just so happens is located right in that rich gas fairway,” Kutryk said.”The growth in gas production is all in the areas that are serviced by our pipe.”

Deliveries go to the affiliated, jumbo Aux Sable liquids extraction plant near Chicago with access to the Alliance Chicago Exchange (ACE Hub). Since starting up at the same time as Alliance, the Aux Sable site has processed 7.2 Tcf of gas and pumped out 12 billion gallons of liquid byproducts. Canadian exports fill most of the plant’s capacity for 2.1 Bcf/d of gas and 107,000 b/d. of liquids.

Kutryk said that although the new service and toll package makes liquids volume growth conceivable, no forecasts are being made. Types of liquids carried as vapor in the gas stream vary, with the composition affecting the size and value of delivery batches.

Options include providing early market outlets in the United States for shale reserves under development in BC for future overseas exports from liquefied natural gas (LNG) terminals planned on the province’s northern Pacific Coast.

“You can’t create enough volume behind a project instantly,” Kutryk said. He described Alliance Pipeline as BC’s “bridge to the future,” enabling reserves and field facilities to be built up gradually to the giant scale required by overseas tanker terminals. “If the LNG world occurs, here’s the bridge to it.”